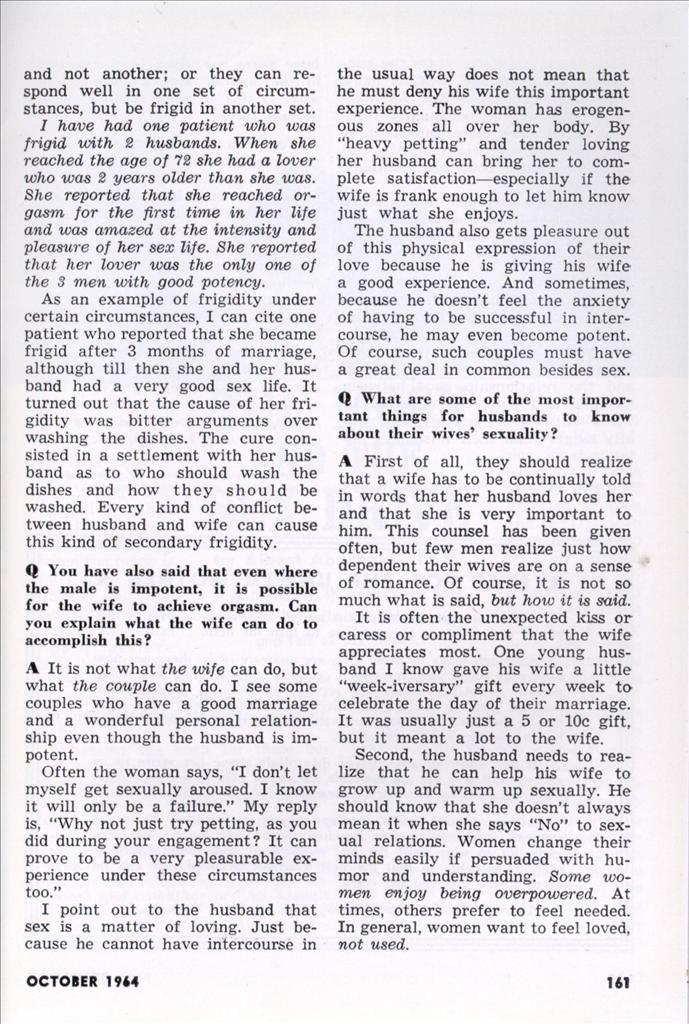 FEW doctors are as well qualified by training and experience to discuss female sexuality as is Dr. Sophia J. Kleegman. She is Clinical Professor of Obstetrics and Gynecology at the New York University-Bellevue Medical Center and a leading marriage counselor with almost 40 years of experience. Dr. Kleegman also is a well-known specialist on problems of fertility and a pioneer in artificial insemination. In a recent interview, Dr. Kleegman discussed various types of female sex problems.

Q. You have said that, in your practice today, you find a sharp decrease in the number of frigid women as compared to 35 years ago. Why, in your opinion, has this change occurred ?

A. When I first began counseling more than 35 years ago, I found that the women who came to me were very much more inhibited and fearful about sex than those who come today. Many of them engaged in intercourse, they said, only out of a sense of wifely duty. When they came for help, it was not with the belief that sex pleasure was for them, but out of the desire to be “a good wife,” and please their husbands.

Many of them were afraid to touch their genitals because of their negative attitude about that part of their anatomy. Many of them were brought up in “good homes” where sex was “hush-hush.” Sex, sin and shame were all related.

Don’t forget that it was only about 80 years ago that one of the country’s leading specialists in women’s problems said, “Any wife who enjoys sex in the marital relation is no better than a prostitute.”

Today, women have a definite expectation of getting pleasure out of their participation in sex relations. The mothers of today’s brides have given them a much more wholesome attitude toward sex and to their anatomy in their early years. The use of tampons during menstruation has helped to get women accustomed to touching this part of their body. Of course, the major factor has been the great change to open discussion of sex, in large measure due to the Kinsey reports. Today, women come to marriage with a real desire to be good sex partners and to fulfill their femininity by personal enjoyment of the sex part of the marriage.

Many doctors feel that frigidity is usually associated with a severe nervous disorder. Do you agree with this?

A. No. I would say that only 15 per cent of the frigid women I have seen had the symptom of frigidity as a part of a severe nervous disorder. These women had acquired a strongly negative feeling toward sex and had rejected their femaleness.

However, the other 85 per cent are neurotics, victims of a wrong upbringing or of being married to sexually inadequate or uninformed husbands.

Many of these have just not learned how to respond sexually, having been taught only to repress all sex feeling. Such young women need reeducation and counseling. Teaching them and their husbands the anatomy and physiology and psychology of intercourse, releasing them from worry and a sense of failure and guilt, and helping them grow up can usually overcome the frigidity of this group of women.

Some are disappointed because the glorious ecstasy promised by the movies and cheap literature doesn’t materialize. They feel inadequate and guilty; sometimes they say to themselves, “There must be something wrong with me.” There are also women who are only selectively frigid. Many of these women can be helped by education about intercourse and by instructions in better technique.

The couple learns how important it is to experiment, to choose, to do that which gives each other the most pleasure.

Thus, while a small number of women need referral to a doctor, education is the best treatment for most of them.

Q. You mentioned that some women are only “selectively frigid.” Could you explain what you mean by this?

A. There are some women who have excellent sex response with one man and not another; or they can respond well in one set of circumstances, but be frigid in another set.

I have had one patient who was frigid with 2 husbands. When she reached the age of 72 she had a lover who was 2 years older than she was. She reported that she reached orgasm for the first time in her life and was amazed at the intensity and pleasure of her sex life. She reported that her lover was the only one of the 3 men with good potency.

As an example of frigidity under certain circumstances, I can cite one patient who reported that she became frigid after 3 months of marriage, although till then she and her husband had a very good sex life. It turned out that the cause of her frigidity was bitter arguments over washing the dishes. The cure consisted in a settlement with her husband as to who should wash the dishes and how they should be washed. Every kind of conflict between husband and wife can cause this kind of secondary frigidity.

Q. You have also said that even where the male is impotent, it is possible for the wife to achieve orgasm. Can you explain what the wife can do to accomplish this?

A. It is not what the wife can do, but what the couple can do. I see some couples who have a good marriage and a wonderful personal relationship even though the husband is impotent.

Often the woman says, “I don’t let myself get sexually aroused. I know it will only be a failure.” My reply is, “Why not just try petting, as you did during your engagement? It can prove to be a very pleasurable experience under these circumstances too.”

I point out to the husband that sex is a matter of loving. Just because he cannot have intercourse in the usual way does not mean that he must deny his wife this important experience. The woman has erogenous zones all over her body. By “heavy petting” and tender loving her husband can bring her to complete satisfaction—especially if the wife is frank enough to let him know just what she enjoys.

The husband also gets pleasure out of this physical expression of their love because he is giving his wife a good experience. And sometimes, because he doesn’t feel the anxiety of having to be successful in intercourse, he may even become potent. Of course, such couples must have a great deal in common besides sex.

Q. What are some of the most important things for husbands to know about their wives’ sexuality?

A. First of all, they should realize that a wife has to be continually told in words that her husband loves her and that she is very important to him. This counsel has been given often, but few men realize just how dependent their wives are on a sense of romance. Of course, it is not so much what is said, but how it is said.

It is often the unexpected kiss or caress or compliment that the wife appreciates most. One young husband I know gave his wife a little “week-iversary” gift every week to celebrate the day of their marriage. It was usually just a 5 or 10c gift, but it meant a lot to the wife.

Second, the husband needs to realize that he can help his wife to grow up and warm up sexually. He should know that she doesn’t always mean it when she says “No” to sexual relations. Women change their minds easily if persuaded with humor and understanding. Some women enjoy being overpowered. At times, others prefer to feel needed. In general, women want to feel loved, not used.

It is often assumed that after a number of years of marriage the wife becomes sexually indifferent to her husband. Is this so?

A. No, I believe a good marriage improves in every area with the years. Some women will lose their sex desire in the early 50’s or 60’s because of hormone changes, but this can be helped. If sex life is well established and the relationship good between husband and wife, the majority of wives will respond actively, and usually longer than their husband’s potency lasts.

Q. Lack of male stimulation in the later years has often been attributed to the waning attractiveness of the wife. Is this in your opinion an important factor?

A. Yes, both husband and wife should recognize the importance of keeping up their physical attractiveness especially in their later years. Beauty is skin deep, but it may cover many an unpleasant personal trait or habit.

Keeping up her attractiveness is also important for the wife’s own feelings about herself. If she feels attractive to her husband, she will respond to him more readily and wholeheartedly.

As far as the women I see here in New York are concerned, this doesn’t seem to be much of a problem. Most of them are very careful about their figure and their looks and seem to do a great deal to keep up their attractiveness.