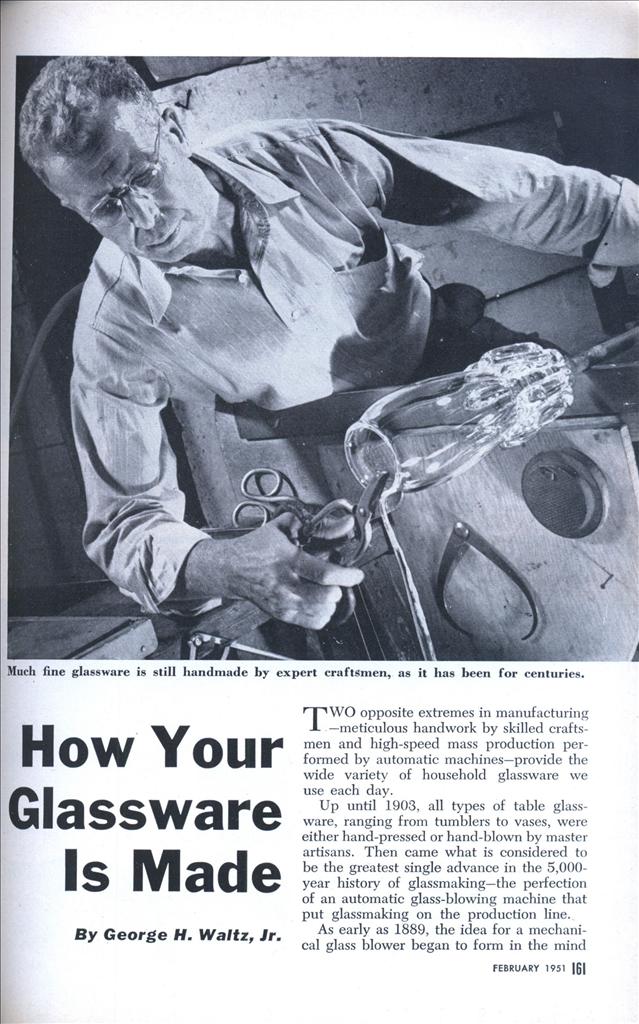 How Your Glassware Is Made

TWO opposite extremes in manufacturing —meticulous handwork by skilled craftsmen and high-speed mass production performed by automatic machines—provide the wide variety of household glassware we use each day.

Up until 1903, all types of table glassware, ranging from tumblers to vases, were either hand-pressed or hand-blown by master artisans. Then came what is considered to be the greatest single advance in the 5,000-year history of glassmaking—the perfection of an automatic glass-blowing machine that put glassmaking on the production line.

As early as 1889, the idea for a mechanical glass blower began to form in the mind of Michael Owens, d. master blower at a glass works operated by Edward Libbey in Toledo, Ohio. One day while Owens was struggling with a particularly inept crew of apprentice glassmakers, he wondered if it wouldn’t be possible to devise a machine to take their places. Secretly, he designed and built a wooden working model of such a machine. When he showed it to Libbey, the boss was so impressed that he agreed to set up a company to carry on the experimental work with Owens as general manager.

Machine Works like Bicycle Pump Owens’ first full-size machines were simple and ingenious—and they worked. They operated on the principle of the bicycle pump. When a piston was withdrawn, molten glass was sucked up into a metal mold from a supply pot. When the piston was pushed in, the compressed air forced the molten glass against the sides of the mold to form the desired shape. It was as simple as that, and the same basic principle is still used today in the modern machines that produce the major portion of our low-cost household glassware.

Automatic machines, however, have by no means completely replaced the master glass craftsman. Expensive glassware is still created by the same so-called “offhand” blowing methods that have been followed for centuries. At glass works like those main- tained by Steuben Glass, Inc., at Corning, N. Y., skilled glassmakers still use the ancient processes and the crude tools of their craft to turn out decorative tableware and other glass art objects.

They still stick to the old “shop” method of glassmaking in which a master blower, known as a “gaffer,” supervises five assistants. Directly under the gaffer is his “serviter” who blows the glass into its basic form. Then in order come the “gatherer” who gathers or picks up a glob of molten glass from the glass furnace on the end of a blowing rod and gives it to the serviter, the “bit gatherer” whose job it is to gather up on a long stick called a pontil (pronounced “punty”) the small amounts of additional molten glass needed for decorations, stems, etc., the “stick boy” who holds the gathers, and finally the “carry-in boy” who carries the finished piece to the oven, called a “lehr,” where the glass is annealed.

The six men work as a team, with the gaffer calling the signals. He is the artist, the master, who carefully shapes the molten glass (or “metal” as the glassmakers call it) into its final form. His skill comes from long experience.

Glassware made by pressing, rather than blowing, is another traditional type that is still produced, but it too for the most part is now turned out on automatic machines. Many items such as heatproof ovenware, some types of lenses, and decorative ornaments are made in modern, automatic glass presses.

By blending handwork with machines, the glassmakers are making everything from cheap but attractive dime-store tumblers to expensive crystal works of art that enliven our dining tables for festive occasions and decorate our homes.