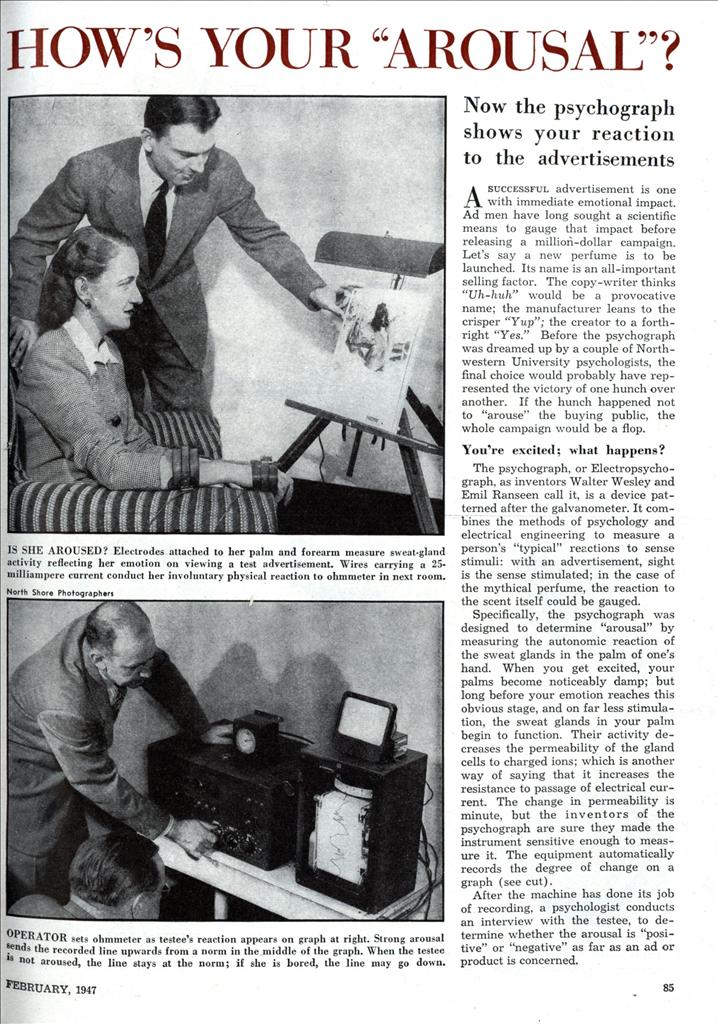 Now the psychograph shows your reaction to the advertisements A successful advertisement is one with immediate emotional impact. Ad men have long sought a scientific means to gauge that impact before releasing a million-dollar campaign. Let’s say a new perfume is to be launched. Its name is an all-important selling factor. The copy-writer thinks “Uh-huh” would be a provocative name; the manufacturer leans to the crisper “Yup”; the creator to a forthright “Yes.” Before the psychograph was dreamed up by a couple of Northwestern University psychologists, the final choice would probably have represented the victory of one hunch over another. If the hunch happened not to “arouse” the buying public, the whole campaign would be a flop.

The psychograph, or Electropsychograph, as inventors Walter Wesley and Emil Ranseen call it, is a device patterned after the galvanometer. It combines the methods of psychology and electrical engineering to measure a person’s “typical” reactions to sense stimuli: with an advertisement, sight is the sense stimulated; in the case of the mythical perfume, the reaction to the scent itself could be gauged.

Specifically, the psychograph was designed to determine “arousal” by measuring the autonomic reaction of the sweat glands in the palm of one’s hand. When you get excited, your palms become noticeably damp; but long before your emotion reaches this obvious stage, and on far less stimulation, the sweat glands in your palm begin to function. Their activity decreases the permeability of the gland cells to charged ions; which is another way of saying that it increases the resistance to passage of electrical current. The change in permeability is minute, but the inventors of the psychograph are sure they made the instrument sensitive enough to measure it. The equipment automatically records the degree of change on a graph (see cut).

After the machine has done its job of recording, a psychologist conducts an interview with the testee, to determine whether the arousal is “positive” or “negative” as far as an ad or product is concerned.