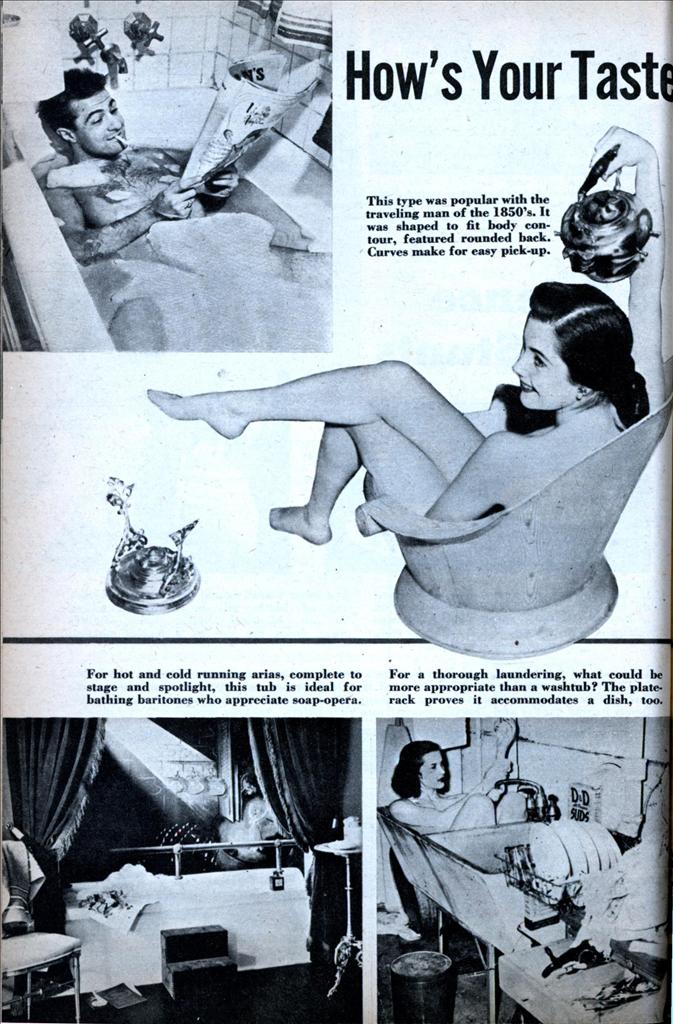 How’s Your Taste In Tubs?

This type was popular with the traveling man of the 1850’s. It was shaped to fit body contour, featured rounded back. Curves make for easy pick-up.

For hot and cold running arias, complete to stage and spotlight, this tub is ideal for bathing baritones who appreciate soap-opera.

For a thorough laundering, what could be more appropriate than a washtub? The plate-rack proves it accommodates a dish, too.

With due allowance for preferences in size and shape, few things known to man can equal the comfort-giving qualities and the relaxation afforded by a—bathtub.

FOR a long time B.B. (Before Bathtubs) rivers were used in summer and nothing at all was used in winter. The luxury of the private bath was virtually unknown and the stock joke about people being washed only three times in their lives—at birth, at marriage and at death—could well apply to nine-tenths of the population.

The history of bathing shows conclusively that the solitary scrub was something to be assiduously avoided. Cleanliness may have been next to godliness, but godliness very definitely came first—and the deliberate dunk was largely used for ceremonial and religious rites only. Thus, full immersion was considered a proper ordeal for young Englishmen who wished to become Knights of the Bath. And in medieval Germany a young lady was expected to give up washing once she had secured a husband—on the assumption that the sanctity of marriage was purification enough!

Of course, public bathing was another thing. The Greeks and Romans had elaborate bath-houses and so did many Oriental countries. In Europe, too, they existed in considerable numbers from the twelfth century on, and in fact were a prime form of social expression. Many had galleries for spectators, like seal enclosures at a zoo, with the pool itself featuring coeducational bath- ing. The atmosphere was described by a contemporary observer as “gay and innocent” however, and the men wore trunks of sorts and the women chemises.

The bathtub proper was developed in fifteenth century France, and was a full-sized piece of furniture. Its dimensions, however, were not enlarged to enable a bather to lie down so much as they were designed to enable a second one to get in. Occupants sat face to face and pictures of the period show a tray between them with a meal on it.

In America, the first formal bathtub was brought from France by Benjamin Franklin. This was a copper affair, resembling a shoe, with a grate in the “heel” for heating the water. As the son of a soapmaker, Franklin was naturally interested in taking baths. Also, he had picked up the habit, while in France, of receiving callers while sitting in the tub. This custom never took hold in the United States, but bathing did, and the Saturday night bath became a respected custom. Saturday night was chosen because the family’s weekly baking was done on that day and water could be heated while the oven was in use.

Today’s tub is far from standardized and ranges from the G.I. helmet to the black-and-gold African marble job which costs $50,000, with fittings. What’s yours?