Wouldn’t it be better for the pilot to control the engines? Designing an airplane like a flying ship doesn’t seem like a great idea. Plus, that’s a pretty damn large cockpit!

Actually  Charlie,  everyone but Charlene pretty much got it wrong.  The pilots did indeed have engine controls in the cockpit as evidenced by the photograph in this article from Flight magazine.  A close up of the controls at the flight engineer console can be zoomed to where you can just read the labels on the first two sets of levers: Engine Cowl Flaps and Manifold Pressure Controls.  So the pilot “controls” the engines with the throttles, trim levers and mixture controls at his station but the engines are “managed”  and monitored by the Flight Engineer. 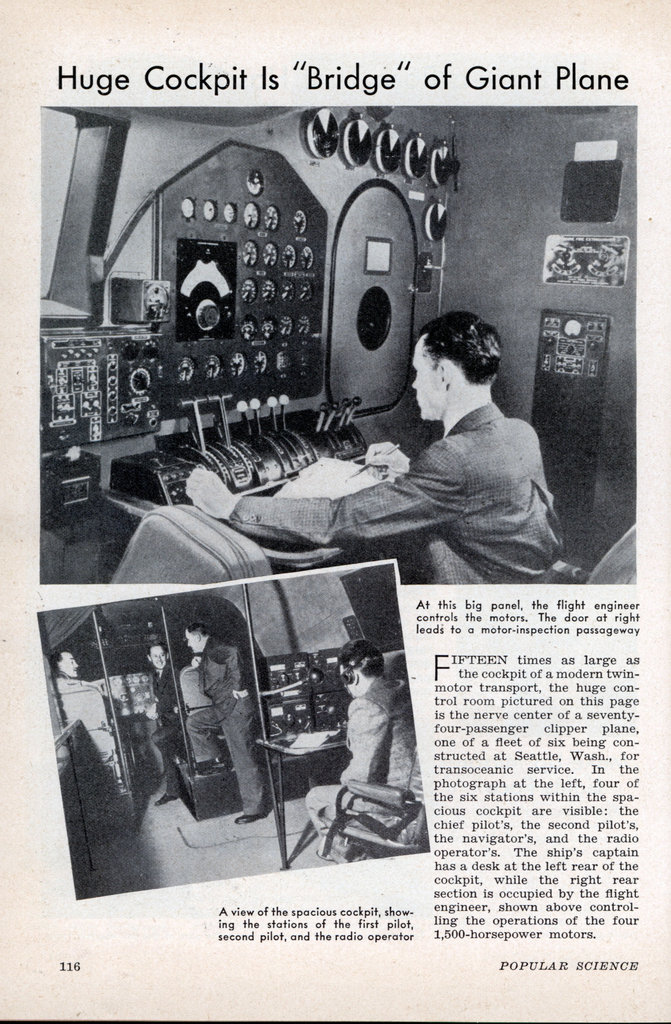 Huge Cockpit Is “Bridge” of Giant Plane
FIFTEEN times as large as the cockpit of a modern twin-motor transport, the huge control room pictured on this page is the nerve center of a seventy-four-passenger clipper plane, one of a fleet of six being constructed at Seattle, Wash., for transoceanic service. In the photograph at the left, four of the six stations within the spacious cockpit are visible: the chief pilot’s, the second pilot’s, the navigator’s, and the radio operator’s. The ship’s captain has a desk at the left rear of the cockpit, while the right rear section is occupied by the flight engineer, shown above controlling the operations of the four 1,500-horsepower motors.