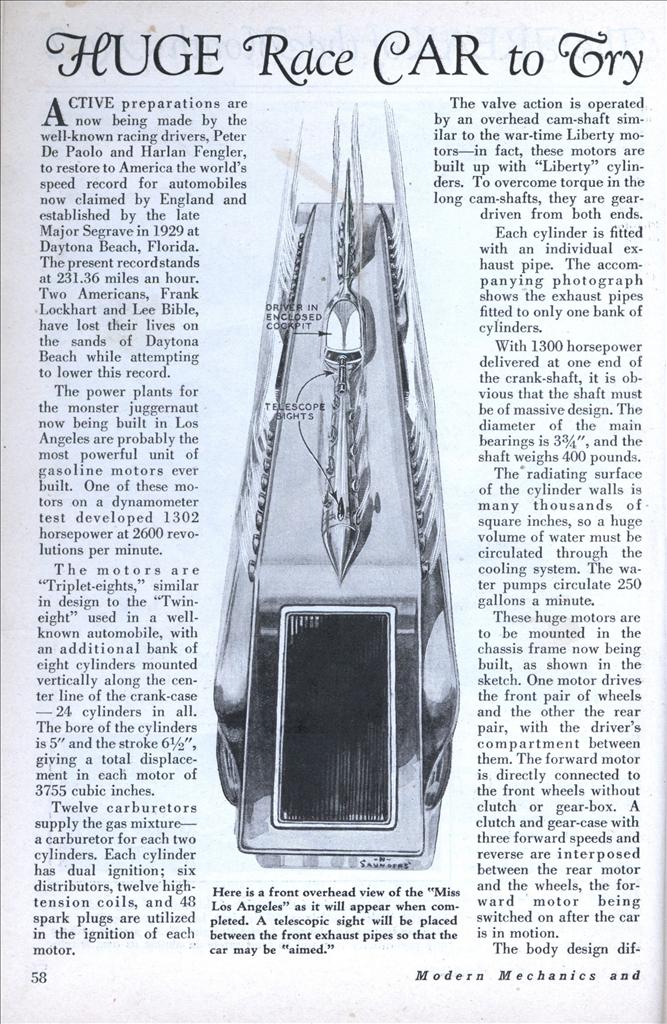 Huge Race Car to Try for 300 Miles an Hour Speed

ACTIVE preparations are now being made by the well-known racing drivers, Peter De Paolo and Harlan Fengler, to restore to America the world’s speed record for automobiles now claimed by England and established by the late Major Segrave in 1929 at Daytona Beach, Florida. The present record stands at 231.36 miles an hour. Two Americans, Frank Lockhart and Lee Bible, have lost their lives on the sands of Daytona Beach while attempting to lower this record.

The power plants for the monster juggernaut now being built in Los Angeles are probably the most powerful unit of gasoline motors ever built. One of these motors on a dynamometer test developed 1302 horsepower at 2600 revolutions per minute.

The motors are “Triplet-eights,” similar in design to the “Twin-eight” used in a well-known automobile, with an additional bank of eight cylinders mounted vertically along the center line of the crank-case â€” 24 cylinders in all. The bore of the cylinders is 5″ and the stroke 6-1/2″, giving a total displacement in each motor of 3755 cubic inches.

Twelve carburetors supply the gas mixtureâ€” a carburetor for each two cylinders. Each cylinder has dual ignition; six distributors, twelve high-tension coils, and 43 spark plugs are utilized in the ignition of each motor.

The valve action is operated by an overhead cam-shaft similar to the war-time Liberty motorsâ€”in fact, these motors are built up with “Liberty” cylinders. To overcome torque in the long cam-shafts, they are gear-driven from both ends.

Each cylinder is fitted with an individual exhaust pipe. The accompanying photograph shows the exhaust pipes fitted to only one bank of cylinders.

With 1300 horsepower delivered at one end of the crank-shaft, it is obvious that the shaft must be of massive design. The diameter of the main bearings is 3-3/4, and the shaft weighs 400 pounds.

The radiating surface of the cylinder walls is many thousands of square inches, so a huge volume of water must be circulated through the cooling system. The water pumps circulate 250 gallons a minute.

These huge motors are to be mounted in the chassis frame now being built, as shown in the sketch. One motor drives the front pair of wheels and the other the rear pair, with the driver’s compartment between them. The forward motor is directly connected to the front wheels without . clutch or gear-box. A clutch and gear-case with three forward speeds and reverse are interposed between the rear motor and the wheels, the forward motor being switched on after the car is in motion.

The body design differs from many other speed juggernauts in that it is not radically streamlined. Rather than seeking to reduce wind pressure to a minimum the air pressure is used to push and suck the car to the ground and provide more positive traction.

The gear ratio between the motors and the wheels is 1 to 1-1/4; in other words, the wheels turn a quarter faster than the crankshaft of the motor. At 2600 r.p.m. engine speed the wheels will turn 3250 r.p.m. Fitted with 36-inch tires, this represents a circumference velocity of 514 feet a secondâ€”350 miles an hour. In actual practice, however, the theoretical figures are cut down due to slippage. Nevertheless, the builders are confident of smashing Major Segrave’s record by a wide marginâ€”maybe 300 miles an hour.