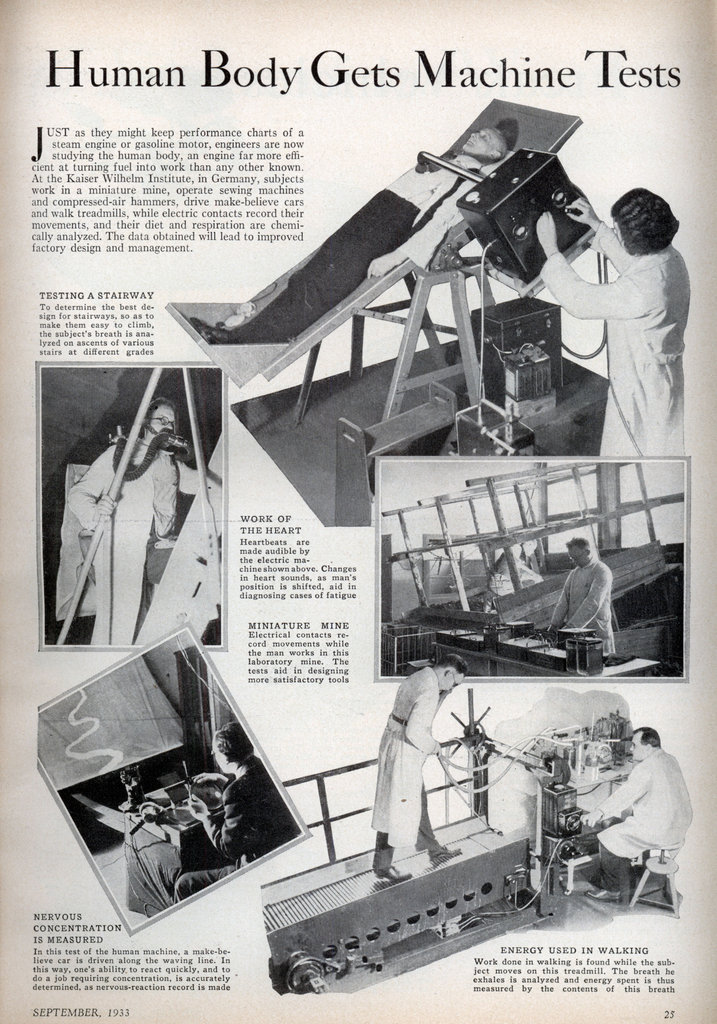 JUST as they might keep performance charts of a steam engine or gasoline motor, engineers are now studying the human body, an engine far more efficient at turning fuel into work than any other known. At the Kaiser Wilhelm Institute, in Germany, subjects work in a miniature mine, operate sewing machines and compressed-air hammers, drive make-believe cars and walk treadmills, while electric contacts record their movements, and their diet and respiration are chemically analyzed. The data obtained will lead to improved factory design and management.

TESTING A STAIRWAY
To determine the best design for stairways, so as to make them easy to climb, the subject’s breath is analyzed on ascents of various stairs at different grades

NERVOUS CONCENTRATION IS MEASURED
In this test of the human machine, a make-believe car is driven along the waving line. In this way, one’s ability to react quickly, and to do a job requiring concentration, is accurately determined, as nervous-reaction record is made

WORK OF THE HEART
Heartbeats are made audible by the electric machine shown above. Changes in heart sounds, as man’s position is shifted, aid in diagnosing cases of fatigue

MINIATURE MINE
Electrical contacts record movements while the man works in this laboratory mine. The tests aid in designing more satisfactory tools

ENERGY USED IN WALKING
Work done in walking is found while the subject moves on this treadmill. The breath he exhales is analyzed and energy spent is thus measured by the contents of this breath