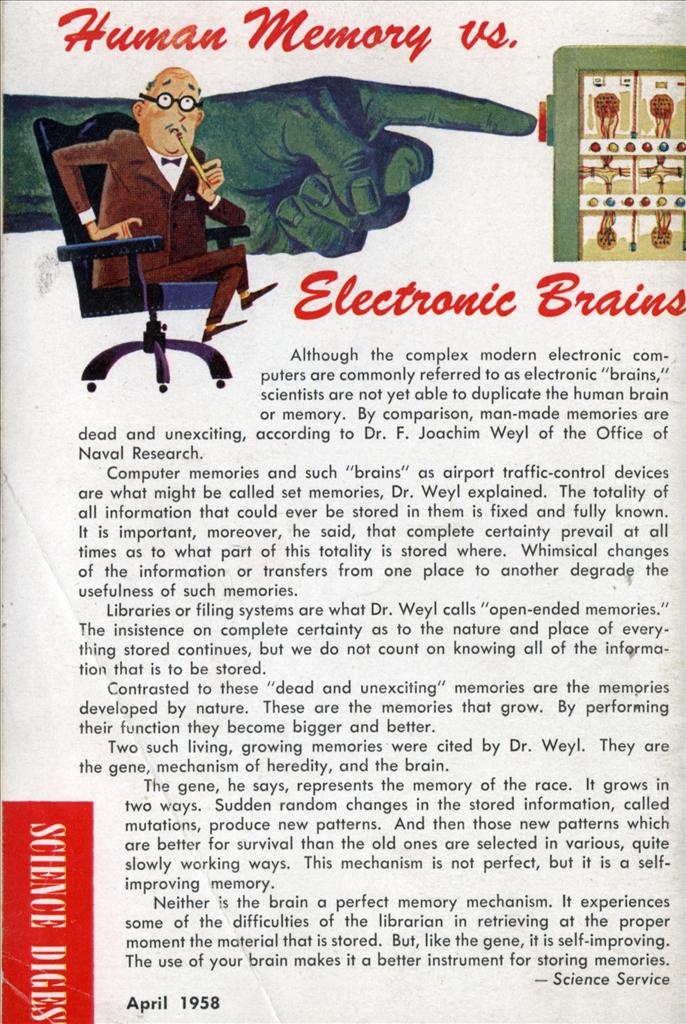 Although the complex modern electronic computers are commonly referred to as electronic “brains/7 scientists are not yet able to duplicate the human brain or memory. By comparison, man-made memories are dead and unexciting, according to Dr. F. Joachim Weyl of the Office of Naval Research.

Computer memories and such “brains” as airport traffic-control devices are what might be called set memories, Dr. Weyl explained. The totality of all information that could ever be stored in them is fixed and fully known. It is important, moreover, he said, that complete certainty prevail at all times as to what part of this totality is stored where. Whimsical changes of the information or transfers from one place to another degrade the usefulness of such memories.

Libraries or filing systems are what Dr. Weyl calls “open-ended memories.” The insistence on complete certainty as to the nature and place of everything stored continues, but we do not count on knowing all of the information that is to be stored.

Two such living, growing memories were cited by Dr. Weyl. They are the gene, mechanism of heredity, and the brain.

The gene, he says, represents the memory of the race. It grows in two ways. Sudden random changes in the stored information, called mutations, produce new patterns. And then those new patterns which are better for survival than the old ones are selected in various, quite slowly working ways. This mechanism is not perfect, but it is a self-improving memory.

Neither is the brain a perfect memory mechanism. It experiences some of the difficulties of the librarian in retrieving at the proper moment the material that is stored. But, like the gene, it is self-improving. The use of your brain makes it a better instrument for storing memories.