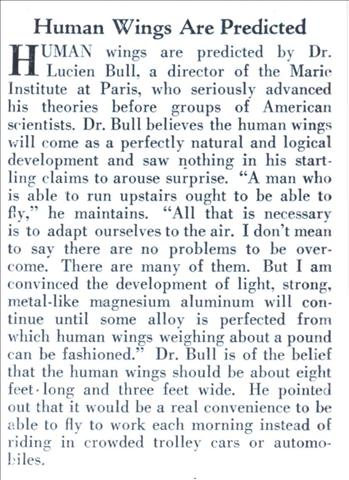 HUMAN wings are predicted by Dr. Lucien Bull, a director of the Marie Institute at Paris, who seriously advanced his theories before groups of American scientists. Dr. Bull believes the human wings will come as a perfectly natural and logical development and saw nothing in his startling claims to arouse surprise. “A man who is able to run upstairs ought to be able to fly,” he maintains. “All that is necessary is to adapt ourselves to the air. I don’t mean to say there are no problems to be overcome. There are many of them. But I am convinced the development of light, strong, metal-like magnesium aluminum will continue until some alloy is perfected front which human wings weighing about a pound can be fashioned.” Dr. Bull is of the belief that the human wings should be about eight feet-long and three feet wide. He pointed out that it would be a real convenience to be able to fly to work each morning instead of riding in crowded trolley cars or automobiles.