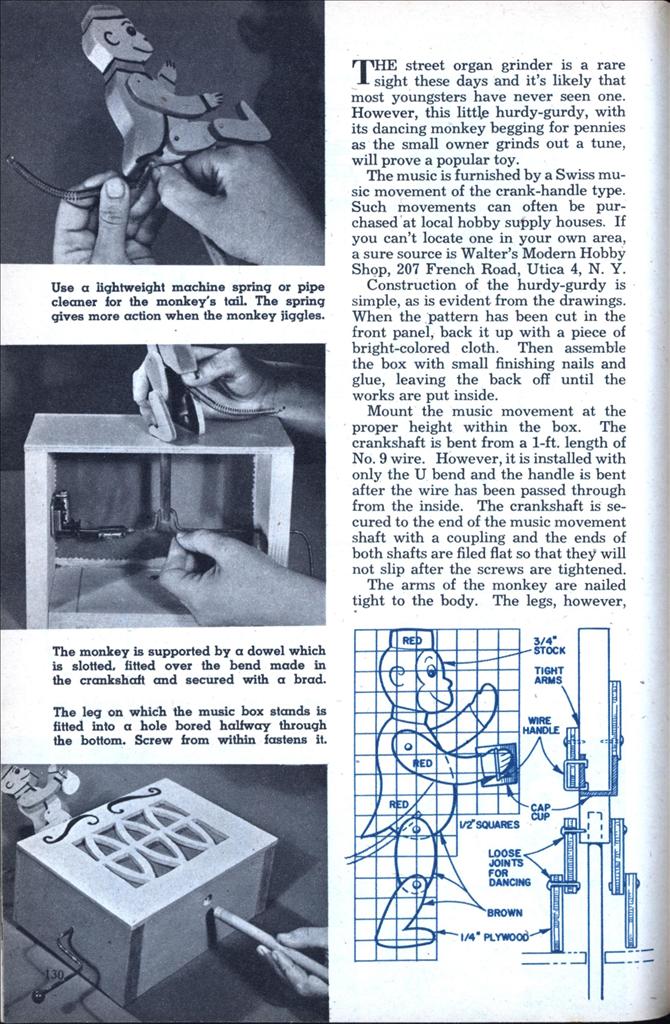 Cranking the Swiss music movement within this box makes the little begging monkey go into his dance.

THE street organ grinder is a rare sight these days and it’s likely that most youngsters have never seen one. However, this little hurdy-gurdy, with its dancing monkey begging for pennies as the small owner grinds out a tune, will prove a popular toy.

The music is furnished by a Swiss music movement of the crank-handle type. Such movements can often be purchased at local hobby supply houses. If you can’t locate one in your own area, a sure source is Walter’s Modern Hobby Shop, 207 French Road, Utica 4, N. Y.

Construction of the hurdy-gurdy is simple, as is evident from the drawings. When the pattern has been cut in the front panel, back it up with a piece of bright-colored cloth. Then assemble the box with small finishing nails and glue, leaving the back off until the works are put inside.

Mount the music movement at the proper height within the box. The crankshaft is bent from a 1-ft. length of No. 9 wire. However, it is installed with only the U bend and the handle is bent after the wire has been passed through from the inside. The crankshaft is secured to the end of the music movement shaft with a coupling and the ends of both shafts are filed flat so that they will not slip after the screws are tightened.

Use a plastic bottle cap for the monkey’s cup. Two holes are drilled through the side and a short length of copper wire is inserted for the handle. Then slip the cup handle over the monkey’s hand and cement the cup and hand together with household cement.

Install the monkey by slipping the slot in the lower end of the dowel over the U bend in the crankshaft. A small brad, bent over at the end, locks it in place.

The length of 20 inches for the leg of the music box is about right for most 4- or 5-year-olds. However, the length may be varied as may that of the neck strap. This strap is made of denim or other suitable heavy material.

Add a door knob to the side of the box opposite the crank handle to permit the child to steady the instrument. Finally, fasten the back in place with four screws.

Painting suggestions are given for the monkey, but best make the face tan in contrast to the rest of the body. Then too, the parts should be painted before they are assembled. The original box was gray, but a livelier color or combination of colors will appeal more to children.