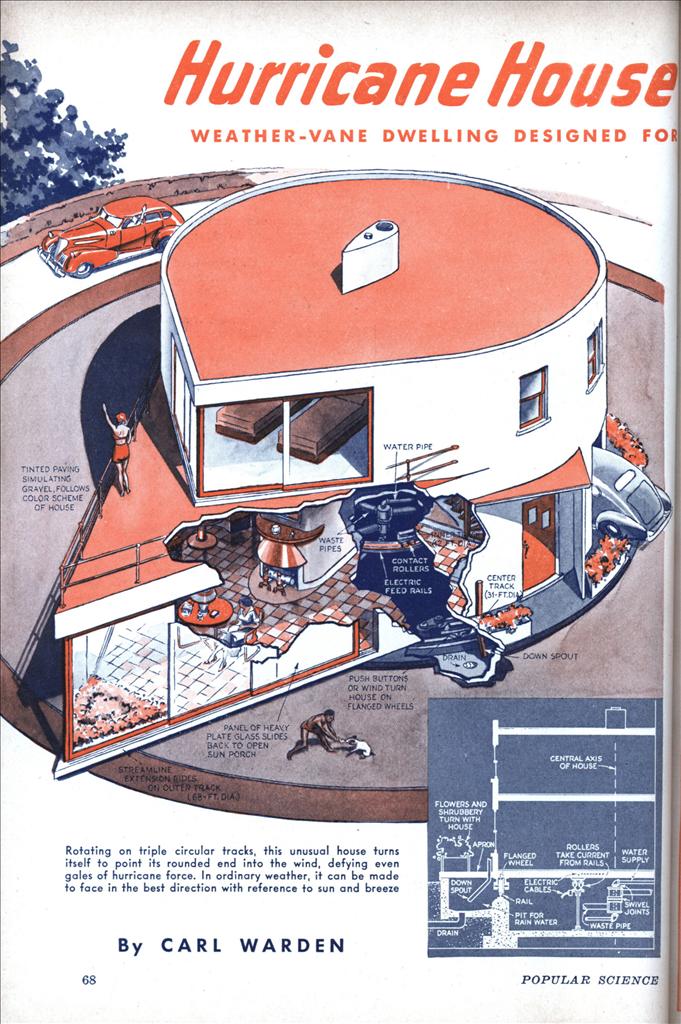 WEATHER-VANE DWELLING DESIGNED FOR BOTH SAFETY AND COMFORT

WHEN raging storms whip across the land, accompanied by violent gales that uproot trees, tear the roofs from houses, and turn a trim countryside into a scene of desolation, there could probably be no safer refuge than the interior of a novel hurricane house designed by Edwin A. Koch, New York City architect. Streamline in the form of a mammoth teardrop, this amazing dwelling would revolve automatically to face into the oncoming storm, meeting it like the wing of an airplane and passing it smoothly around its curving sides toward its pointed tip.

Although planned for areas subject to periodic winds of gale force, the unique home has other unusual features that adapt it to luxurious living in any climate. Constructed of light steel channels and I-beam sections bolted together, the house has insulated walls faced on the exterior with semiflexible waterproof plywood. The entire structure rests on flanged wheels similar in construction to those found on a highway or railroad drawbridge. These run on three separate circular tracks: an inner track twelve feet in diameter, a second, placed just below the exterior walls, measuring thirty-one feet in diameter, and an outside, sixty-eight foot track for a wheel located at the pointed tip of the dwelling and cleverly concealed by an indoor living-room flower-bed.

A cantilevered floor covered with boiler plate extends beyond the outside walls for a distance of four feet to prevent driving rains from beating into the pit below the house, and to form an apron for the garage, a platform for the entrance doorways, and a ledge for flower boxes. Electricity enters the building through the inner track, while the water-supply and sewage pipes come in underground at the axis on which the house turns, swivel joints being provided to connect the stationary exterior pipes with those which are attached to the dwelling.

Inside the house, the first floor provides an entrance hall, a triangular living room with a built-in dining section on one side and a built-in library nook on the other, a kitchen, laundry, heater room, and a garage having space for a workbench and a trapdoor that provides access to the piping, wiring, and track mechanisms in the foundation pit below. Upstairs there are three large bedrooms, two baths, and a spacious open sun deck. Garage doors, and most of the broad expanse of glass windows, slide into the walls.

Merely by selecting the desired push button on a central control board, the entire house may be rotated to face rooms toward or away from the sun or to point bedroom windows toward a cooling breeze.