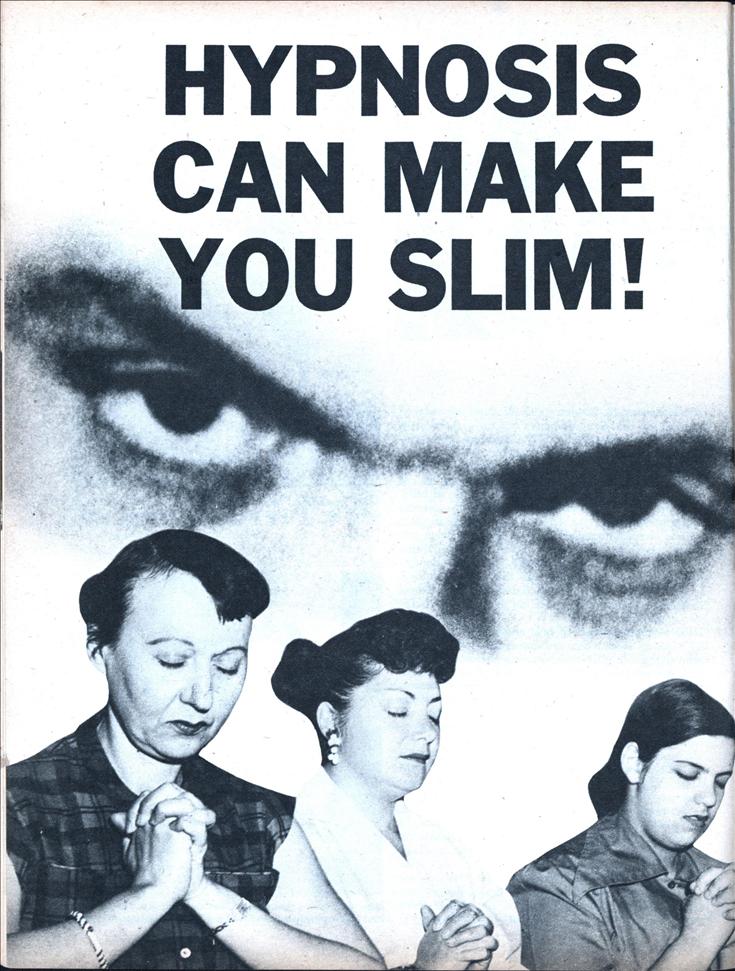 HYPNOSIS CAN MAKE YOU SLIM!

If will power doesn’t work for you, your subconscious mind may— but beware of amateurs!

“CLOSE YOUR EYES and hold both arms straight out in front of you,” the doctor ordered. A plump blond girl sitting on the edge of a couch—a girl who would be very attractive if she could take off twenty pounds—did as she was told.

“Now relax,” the doctor went on, his voice soothing, without inflection or emphasis. “You are drifting calmly. You are getting close to sleep. You are floating, relaxed, waiting for sleep to come. It is peaceful, dark, cool. You will sleep soon.”

The doctor moved up closer to his patient. “Your left arm is heavy. You have a twenty-pound weight in your left hand. Your right arm is weightless, so light it is difficult to hold down.”

He repeated this many times quietly, without urgency. The girl’s left arm began to tremble in exertion and dropped slowly to her side. Her right arm floated up and away from her in a graceful, airy gesture. She was hypnotized.

“You can put your hands in your lap, now, Virginia,” the doctor said, getting down to business. “You will be hungry only at mealtime. You will not feel hunger between meals. Your stomach will feel stretched, full and warm. If you understand what I’ve said so far, nod.” The girl nodded twice, briskly.

“At meals, only the foods on your diet will appeal to you. Potatoes and starches will seem inedible to you. Desserts and sweets will make you feel vaguely ill. Is that clear? Nod.” The girl nodded again.

“You will have no desire to overeat. You’ll try to avoid that stuffed feeling because it makes you uncomfortable and unhappy.

“When you’re tempted to break your diet or to overeat, remember that image of yourself we talked about. The image of a slim, pretty blond girl in a party dress. Remember that you can be that girl. All right?” Unbidden, the girl nodded vigorously.

“Virginia,” the doctor called gently. “Wake up now, Virginia.” The girl shook herself lightly, opened her eyes and smiled.

Virginia was attempting to lose weight through hyp- nosis. She had tried crash diets, salt-free diets and yogurt diets—all without success. She’d last two, three, four days on a diet, then go off on an eating binge that left her heavier than ever. When she reached 175 pounds—lumped unkindly on her 5’4″ frame—her younger brother had remarked that she had stepped up a class- from light-heavy to heavyweight. Virginia finally had a talk with the family physician, and the doctor recommended a physician experienced in the use of hypnosis.

In four months, through hypnosis, Virginia had shed forty pounds. In the four months to come, she would taper off, dropping five pounds a month until she was a slim 115—the weight doctors had always recommended for her.

If you feel you must lose weight but lack willpower to stick to a given diet, then hypnosis may be the right method for you. Hypnosis can, in large measure, take the place of will-power. Through posthypnotic suggestion, your stomach can be made to feel comfortably full throughout the day, calorie-rich foods can be made repulsive to you and the desire to stuff yourself at meals can be eliminated.

Diet control by hypnosis was used by a gynecologist, Dr. L. B. Winkelstein, on a group of 42 hypnosis-susceptible overweight women. Reporting in the New York State Journal of Medicine, Dr. Winkelstein said that in six months of treatment, weight losses varied from 9.25 to 58.6 pounds, with an average weight loss of almost 27 pounds.

One patient in Dr. Winkelstein’s study, a woman who was fifty pounds overweight, had tried thyroid and anorexic (appetite-killing) drugs without success. The weight loss for her first month of hypnotherapy was 5, 5, 3, and 1 pounds per week.

Another woman, 45 pounds overweight, complained of weakness, dizziness and the “shakes” after two weeks of dieting. The patient had a history of faulty blood-sugar regulation. It was suggested to her in hypnosis that if she continued on the diet, her symptoms would disappear. After two weeks of intensive hypnotic sessions, her blood-sugar mechanism adjusted itself. In six months of dieting with the aid of hypnosis, the woman lost 39 pounds. The weakness, dizziness and shakes had been removed by post-hypnotic suggestion.

The Winkelstein study proved beyond doubt that persons susceptible to hypnosis can be helped to lose weight. His group of 42 women lost a total of 1,124 pounds, over half a ton of blubber.

You can do a lot of things with hypnosis. In hypnotic trance, a man with a life-long fear of heights can tiptoe coolly along a window ledge; a housewife with an average memory can read a page in the telephone directory, close the book, and recite the page verbatim; a shy wall-flower can be turned for a time into a social lioness.

Hypnosis is a powerfully effective tool of the physician, and can be of immense help—in trained hands.

Amateur or “parlor” hynotists can do nothing but harm. Anybody can master a few of the techniques of hypnosis in a few days. Almost everybody can be hypnotized. But the amateur isn’t equipped to handle the frequently astonishing emotions that may be unchained in hypnotic trance. Don’t submit your mind and emotions to “parlor game” hypnosis any more than you’d submit your teeth to amateur dentistry.

Police were summoned recently to an apartment on New York’s East Side, where they found a frail, darkly pretty girl pinned to the floor by four strong men. She fought and screamed, exploding in long indistinguishable streams of four-letter words. An ambulance was called and the girl was given sedation and carted off to the psychiatric section of Bellevue Hospital.

What had happened, police dis- covered, was that the girl had bruised her hand in the door of a taxi on her way to the party. There was no real damage done, but the hand stung. One of the young men tried to hypnotize the pain away. However, once put into trance by this amateur, the girl had gone berserk.

Two days later, after nearly thirty-six hours of continual sleep, the young lady was released from Bellevue. Staff psychiatrists declared her completely sane despite the violent outburst. She was, they said, ready to resume her normal existence.

Yet how normal could that existence be? How could that girl face her friends again?

If you want to try hypnosis to lose weight, don’t submit to amateurs. Consult your physician.

Before using hypnosis to cure overeating, a competent therapist will familiarize himself with the patient’s personal history. The compulsive urge to overeat is neurotic in origin. When it is taken away, the neurosis can blossom in other forms, sometimes more dangerous.

His employers, naturally, took a dim view of this behavior, and, on the advice of the company physician, the man visited a psychiatrist.

The psychiatrist spoke to the man reasonably and at great length about the utter baselessness of his fear. Then he put the patient into hypnotic trance and told him that when he came out, he would no longer have any fear of Friday the Thirteenth.

The man went away, no longer specifically afraid of the day. But his neurotic anxieties, formerly focussed on one day, became general. The man was afraid of everything: heights, open spaces, closed spaces, loud noises, men, women and dogs. He very nearly had a complete break- down.

The psychiatrist had to resort to hypnosis again to re-focus the neurotic’s anxieties on Friday the Thirteenth.

Similarly, the urge to overeat is a neurotic symptom. If is is removed’ other symptoms may take its place. Psychotherapy to treat the basic neurosis may be indicated, rather than treating one symptom—overeating—through hypnotism.

If you’ve tried a variety of diets and drugs without success, hypnosis may be the correct method for you to lose weight. But before you go in for hypnosis, there are a number of things you ought to know.

It’s not cheap. The physician will want to see you at least once—and possibly twice—a week during the course of treatment. These visits may cost anywhere from five to twenty dollars each.

It’s not sure-fire. The 42 women in Dr. Winkelstein’s sucessful study were selected for their susceptibility to hypnosis. You may be one of the few who resist hypnosis. Futhermore, while some weight loss is practically guaranteed to those who can be hypnotized, there is no guarantee that you’ll be able to get down to your “target” weight.

You can put the weight right back on again if you let yourself go again. Of 100 patients in another study, 20 gained back all of the weight they had lost through hypnosis; 20 more gained back some of the weight. But a substantial and encouraging number—60—held the reduced weight.

It’s not quick. While the term of treatment varies greatly from one patient to another, the average period of time required is more than six months.

You can make sure you’re in competent hands. Your county medical association has a directory of members of the Society for Clinical and Experimental Hypnosis. Call them.

And above all, remember that hypnosis is a powerful and little understood tool. Don’t let an amateur monkey around with your mind.