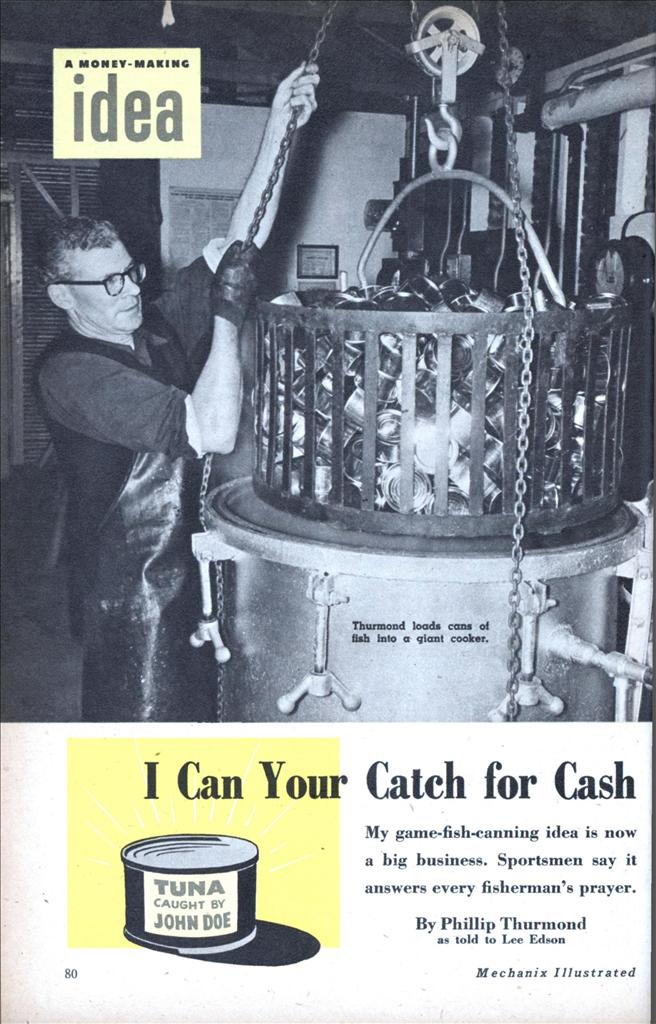 I Can Your Catch for Cash

By Phillip Thurmond as told to Lee Edson

THERE may be fishermen who duck at the sight of a game warden but I’m not one of them. Wardens are my best friends. In fact, I wouldn’t be in my present unusual business if it hadn’t been for the imagination and encouragement of the marine warden of Eureka, California.

The story goes back to the closing days of the last war. Various governmental restrictions and a shrinking market had knocked out my small smoked-fish exporting business, and I was casting about for a new venture when Warden Walter Gray dropped by for a chat.

“Phil,” he said, “how would you like to serve your community, do the sportsmen a good turn and make money besides?”

“Simple,” he explained, “every year, as you know, hundreds of thousands of game fish are wasted because many tourists don’t know what to do with their catches. Frozen fish usually are too expensive to ship, and out-of-state vacationers don’t have the facilities or the inclination to clean and eat their haul on the spot. So many fish are unnecessarily killed. Just wasted.”

“Phil,” he said earnestly, “why don’t you can the sportsman’s catch?”

Why not, indeed? The more I considered the idea-, the better it looked to me. Ocean fishing has always been popular in northern California and it was especially so at the war’s end when many weary defense workers were able to take their first vacations in years. Since commercial canneries wouldn’t touch game fish, there was no competition to fear. But the most appealing part of the warden’s suggestion was that it revealed a unique and inexpensive way to satisfy every sportsman’s desire to take his whoppers home with him.

So in the summer of 1945 I rented a vacant brewery building near the Eureka harbor, bought canning equipment and went into business.

The Sportsmen’s Cannery was an immediate hit. Fishermen were so enthusiastic that sometimes I was tinning as much as a thousand pounds a day. One afternoon about a year ago a young fellow puffed in with a slew of frozen salmon which he said he’d caught in San Francisco Bay, two hundred miles down the coast. And why, he added peevishly, didn’t I open a cannery near the Golden Gate where the fishing was heavier and more varied?

I soon discovered that hundreds of boats ply this Pacific outlet almost all year round and the catches range from small herring to 50-pound striped bass. Once a year albacore tuna, which normally are found 50 miles offshore, swing through the bay in such numbers that some boat owners give up their sport business and temporarily turn commercial.

To make a long story short, I decided to dismantle the Eureka cannery and to open another one in the region of San Francisco. The first problem here was to locate a central site that would attract as many fishermen as possible. I found the answer in a strip of filled land near the Berkeley yacht harbor where a good portion of the East Bay fishing boats dock. The area has drive-in parking space, is near the bait shop and is within sight of the highway leading to the San Francisco Bay Bridge. It is so situated that the fishermen must pass it on their way to town.

After I obtained a long-term lease from the city of Berkeley, which, incidentally, was only too happy to find this unexpected source of income, I designed my own building—a light, wood-frame structure with corrugated steel walls, an aluminum roof and reinforced concrete floor. The dimensions—80 by 14 feet—were selected to accommodate the equipment in a “packing line,” that is, an arrangement in. which the canning operations can be carried out in continuous order from entrance to rear.

Here is the way it works. The fishermen unload their catch on an outside scale where I record the weight, number each fish and give them a receipt. Inside the cannery the fish are cleaned, trimmed and scaled on a butcher’s table and then “guillotined” into properly-sized steaks by means of a gang knife. I pack each can by hand, add a salt pellet for flavor and then seal in a standard cold-vacuum closing machine. The cans are pressure-cooked in a pot that can hold a thousand at a clip.

I charge 15 cents per half-pound can. This includes a label recording the size of the fish, the date it was caught, the type of tackle and, of course, the name of the fisherman. The amount of edible meat I extract depends on the fish. This amounts to about two-thirds of the total weight for an uncleaned salmon. The fisherman actually pays for the weight he takes out, rather than the weight he brings in. I ship C.O.D. throughout the country.

Most of my customers are backyard fishermen, of course. But the cannery has been patronized by visitors from every state and from many foreign countries. There was one chap who flew in from Alexandria, Virginia, whenever I postcarded the fishing conditions. He’d fish intensively for three days, catch the limit and then take off with a carton | of labeled cans. Sometimes the fish are out-of-towners too. Old-time clients have brought catches from as far south as San Diego, from Eureka and other northern California cities. And recently I served a fisherman who hauled in a mess of frozen fish which he’d caught in the South Seas.

The success of the Sportsmen’s Cannery is keyed to the fact that every fisherman is in love with his catch. I know a few businessmen who hand out the canned results of a fishing trip with the pride of new fathers dispensing cigars. Others use the cans for Christmas gifts. European war brides like to send their canned catches to friends and relatives overseas and right now I’m even canning scavenger carp, which some people consider a delicacy.

The romance between a fisherman and his catch never was brought home to me more strongly than on one day when a husky 200-pound hulk of a man came in and hesitantly asked whether I’d can his afternoon’s haul. I told him I’d be glad to. Well, he pulled out a handkerchief and carefully unwrapped a fish that was four inches long. And he looked almost as if he’d lost a close relative when I told him politely that I just couldn’t can anything that small.

When I started this business, I discovered that every sportsman has his own ideas on how to prepare fish, even in the can. Like any beginner I made the mistake of trying to satisfy everyone, an almost impossible undertaking. So I developed a few standards. For example, I can fresh fish only, the fresher the better. I don’t mind a fisherman bringing his catch home to show the folks, but I turn thumbs down on the fellow who keeps it there for several days before he brings it to me. I use a single salt pellet per can, though I will omit it for fishermen on special diets. And I don’t accept fish that have been caught illegally. I remember one chap who was rather indignant when I refused to can his salmon. The reason: he had shot them with a rifle!

One of the toughest problems I licked recently concerns the flavoring of certain game fish. In the vicinity of Richmond. California, where some of the West’s largest oil refineries are located, petroleum leaks into the water and is absorbed by the striped bass. When I first canned this fish, I found that the unpleasant oily taste was accentuated and the fishermen complained. But I didn’t want to give up handling bass, which is the most exciting inland sport fish in the region and hence the most sought after. So I experimented with a variety of sauces. It took me three months to develop a spiced acid that removes the petroleum flavor, but it was worth the trouble. Now this fish is canned regularly and the sportsmen love it. The same sauce, by the way, gives a halibut flavor to the ling cod, which is short on flavor of its own and hence wasn’t prized too highly until I began to can it.

In conjunction with the cannery, 1 conduct what is probably the only smoked-fish house of its kind in the country. I use a technique of salmon smoking that I learned from the Hoopa Indians of Northern California and, so far as I know, is practiced commercially nowhere else. This method consists of stripping the fish into long narrow slivers and dry smoking them for two weeks.

Like fishing itself, cannery operations are seasonal and depend on the weather. When the fish are “running in a line,” I handle about 2500 pounds a week, which provides a satisfactory return on my $10,000 investment, despite the high cost of canning inspection in # California.

Anyone who might desire to enter this type of business doesn’t have to make as large an investment, however. I think a couple of thousand dollars would probably be enough to launch a small cannery, assuming you build your own exhaust box to remove air from the cans and otherwise utilize more primitive equipment.

You don’t have to stick to canning or smoking game fish either. From time to time I have canned venison and turkey, and there’s no reason why you can’t tin berries and fruits in season. In some areas, a cannery might be worked in with a frozen food locker. In any event, it is best to establish the business where sportsmen congregate. Local game clubs and tourist services probably can name many fishing areas where fair portions of America’s twenty million or so sport fishermen get together.

One of the biggest headaches facing anyone who wants to run a custom cannery is the health law. In California, canning regulations are very rigid because of a botulism outbreak that occurred 25 years ago. The law now requires that an inspector be present during canning operations, the expense to be borne by the canner. I’ve been able to gear my operations so that this expense doesn’t throw me out of business, and the public health men and the game wardens are very cooperative because they want me to stay in business. Chances are you may find similar cooperation in your own state.

The Sportsmen’s Cannery is not only a way of making a unique and independent living. It is a real service to the community. •