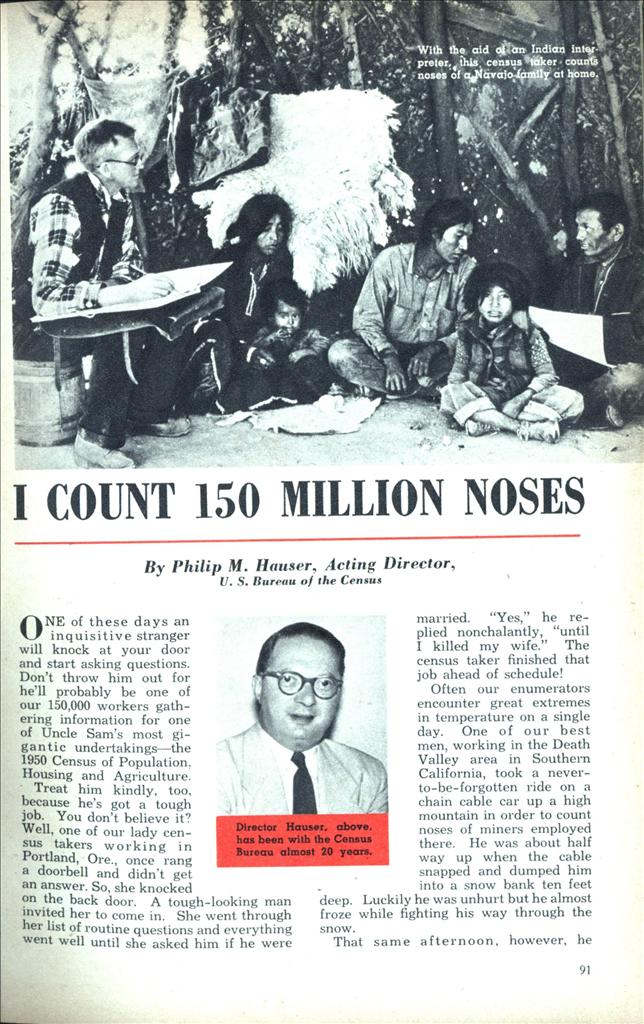 Treat him kindly, too, because he’s got a tough job. You don’t believe it? Well, one of our lady census takers working in Portland, Ore., once rang a doorbell and didn’t get an answer. So, she knocked on the back door. A tough-looking man invited her to come in. She went through her list of routine questions and everything went well until she asked him if he were married. “Yes,” he replied nonchalantly, “until I killed my wife.” The census taker finished that job ahead of schedule!

Often our enumerators encounter great extremes in temperature on a single day. One of our best men, working in the Death Valley area in Southern California, took a never-to-be-forgotten ride on a chain cable car up a high mountain in order to count noses of miners employed there. He was about half way up when the cable snapped and dumped him into a snow bank ten feet deep. Luckily he was unhurt but he almost froze while fighting his way through the snow.

That same afternoon, however, he worked a couple of miles away from the same mountain, about 200 feet below sea level, on the edge of Death Valley. The temperature there was 105 degrees.

Occasionally our workers help save lives. In Chicago a census taker knocked at a door and got no answer. Just as he was turning away he thought he smelled gas. So, he phoned the police and when they broke in they found an unconscious woman in the kitchen—overcome by a leaky oven. She recovered in time to thank the census taker—and answer his questions.

The queerest houses reported by our workers turned up in Florida and Idaho. The Florida dwelling is made entirely of glass bottles. The owner saved them, lined them up in rows, added a little cement and lives contentedly in the two-story structure.

The unique Idaho home is a “wannegan”—it’s a long raft tied together with bark with a crude hut on one end big enough to shelter 20 men. “Wannegans” are used by lumbermen when working along the river temporarily.

April 1,1950, is the day the census army will start ringing doorbells. And there’ll be only 60 days to finish the job. Before it’s over, the Bureau of the Census will have prepared a punch card for you and every member of your family as well as for each of your 150 million neighbors. You’ll be described by a pattern of holes—a hole in one spot will mean you’re married, in another place it’ll mean you’re single. Other holes will record your sex, age, occupation and all the other material the census taker collects.

Thousands of problems will pop up but we’ll have most of the solutions because of our long experience at the job. For instance, what about transients? One traveler may be counted in California this week and in Chicago next week. We solve this by saving all hotels, inns and tourist camps for one particular day. Then the data on people away from home is shipped to their home districts.

If 150,000 census takers seem like a lot of personnel for the job, consider the fact that they will canvass about 42 million families, six million farms and 150,000.000 people. They’ll write down more than five billion items of information!

The tall piles of filled-out schedules are assembled at the district offices and checked to see that they are all returned. Then experts make spot checks of various sections of the territory to make sure the coverage is complete. Finally, the precious records are packed in strong wooden boxes and sent to Washington by registered mail.

In Washington, we really begin the processing. Facts about each person are punched out as holes on cards by the 2500 tabulation machines. The facts are sifted and sorted, then re-sifted by cities and towns, by counties, by states, by regions and by special categories.

Each question requires a complete analysis from the local to the national level. As rapidly as the facts can be computed, they are released in small printed folders. Meanwhile, the computing and cross-tabulating goes on for about three years until the full record is assembled and printed in some 40 volumes containing more than 35,000 pages of basic facts.

If technical engineering problems are solved in time, the Census Bureau may use electronic tabulating equipment for a part of the 1950 census. Such equipment will employ magnetic tape similar to that used on tape recorders. The tape will be fed into an electronic device that will not only tabulate the statistics but also make whatever analyses of them the Census mathematicians specify. The percentages and averages which up till now have been laboriously computed with only the aid of desk calculators may be just one part of the job for the electronic equipment.

But whether or not that equipment will be ready for use in time is our $64 question now.

An operator of one of the present day machines can turn out about 1000 punch cards in a day. Why doesn’t the census taker use a conductive ink or some other device to which a machine could respond and thereby eliminate the need for the operator completely?

The Census Bureau actually has tested such a method in a few big cities like Cincinnati and Altoona. Unfortunately, there were too many bugs in the system and it was considered unwise to try to work them out in time for the 1950 census. But you can watch out for that 1960 census taker. He may be in and out of your house almost before you know it. He may bring a special pen filled with a magnetic ink and merely underline pre-printed answers.

Would you like a little preview of the 1950 census? For instance, what do you think our total population will be in 1950? We expect it to reach 150 million. This will mean the largest increase over any decade in history—an increase of approximately 19 million compared with the previous high of 17 million between 1920 and 1930.

Taking inventory of the social and material life of the nation is our job and we feel it is an important one. The statistics we gather are of vital concern to every one of us and therefore the Census Bureau depends upon the cooperation of all the people of the country. We know that when the inquisitive stranger comes, you’ll help him to the best of your ability.

In certain circumstances, census questions may prove embarrassing, but as one matron in the South proved, even the most embarrassing questions can be worked out to the satisfaction of everybody. This southern lady was being interviewed in the presence of her husband and she said she was 35 years old. The census taker looked dubious but said nothing.

Next day, however, she turned up at the local census office all by herself. She wanted to correct the figure and add about a decade. “I don’t mind fooling my hubby,” she said, “but I just can’t lie to old Uncle Sam.” •