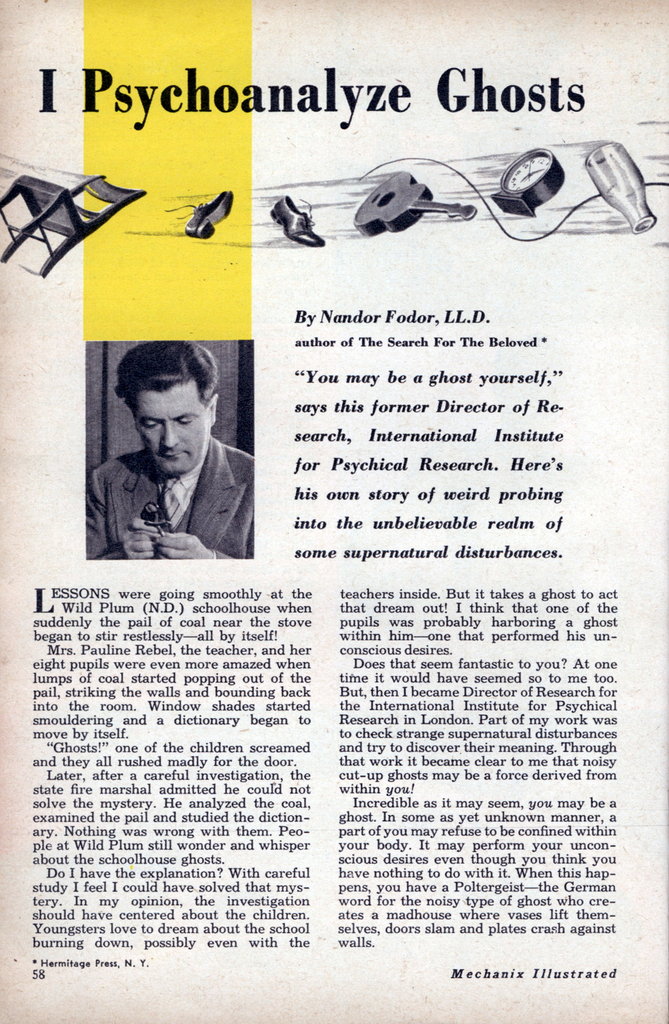 author of The Search For The Beloved

“You may be a ghost yourself,” says this former Director of Research, International Institute for Psychical Research. Here’s his own story of weird probing into the unbelievable realm of some supernatural disturbances.

LESSONS were going smoothly at the I Wild Plum (N.D.) schoolhouse when suddenly the pail of coal near the stove began to stir restlessly all by itself!

Mrs. Pauline Rebel, the teacher, and her eight pupils were even more amazed when lumps of coal started popping out of the pail, striking the walls and bounding back into the room. Window shades started smouldering and a dictionary began to move by itself.

“Ghosts!” one of the children screamed and they all rushed madly for the door.

Later, after a careful investigation, the state fire marshal admitted he could not solve the mystery. He analyzed the coal, examined the pail and studied the dictionary. Nothing was wrong with them. People at Wild Plum still wonder and whisper about the schoolhouse ghosts.

Do I have the explanation? With careful study I feel I could have solved that mystery. In my opinion, the investigation should have centered about the children. Youngsters love to dream about the school burning down, possibly even with the teachers inside. But it takes a ghost to act that dream out! I think that one of the pupils was probably harboring a ghost within him one that performed his unconscious desires.

Does that seem fantastic to you? At one time it would have seemed so to me too. But, then I became Director of Research for the International Institute for Psychical Research in London. Part of my work was to check strange supernatural disturbances and try to discover their meaning. Through that work it became clear to me that noisy cut-up ghosts may be a force derived from within you!

Incredible as it may seem, you may be a ghost. In some as yet unknown manner, a part of you may refuse to be confined within your body. It may perform your unconscious desires even though you think you have nothing to do with it. When this happens, you have a Poltergeist the German word for the noisy type of ghost who creates a madhouse where vases lift themselves, doors slam and plates crash against walls.

Usually it occurs in adolescents, but sometimes it takes place in mentally disturbed adults as well. But you can be sure that where Poltergeists are on the rampage, somebody is sick.

Often, supposed Poltergeists are caught in the act of perpetrating a fraud. Then, scientists are apt to say “I told you so” and ridicule the whole phenomenon. But it must be remembered that when you deal with Poltergeists you deal with unbalanced personalities. Once notoriety has been secured for the person around whom the disturbances occur, he is tempted to fake the manifestations after they have stopped in order to hold the center of the stage.

My most amazing experience with this type of phenomenon was the Thornton Heath Poltergeist in 1938. In the spring of that year, bedlam broke loose in the home of a house painter near London.

I sent my assistant at the Institute to check up. He reported that the wife, whom I shall call Mrs. X, seemed to be the cause of the disturbances. Her reactions were of absolute terror. Her pulse rate went up to 120 and her whole body trembled at each manifestation of the Poltergeist. My assistant saw glasses fly up and explode in the air and felt sure it was a case for the Institute to handle.

Intrigued, I visited the scene of these miracles myself and saw enough to warrant a full investigation. But first, I checked into the woman’s background.

Eight years before, during a game of cards at her home, she fell into an unnatural sleep. She dreamed that her dead father drew a cross on her left breast with his finger and when she woke up there was blood oozing from her breast. And the mark of the cross was there! An examination at a local hospital disclosed a columnar-celled carcinoma under the cross and it was removed by operation.

Once, when she was ill in bed, her husband also took sick. After three days of joint confinement, glasses started to smash themselves on her husband’s side of the bed. Feathers flew out of his pillow and icy blasts struck him in the face. These phenomena have never been explained.

In our experiments at the International Institute for Psychical Research, Mrs. X turned out to be an “apport” specialist. The word comes from the French word “ap-porter” meaning to bring. It’s a spiritualistic term for the mysterious arrival of objects when they could not rationally have appeared.

Mrs. X apported some curious objects out of thin air pieces of pottery from Carthage, Roman lamps, fossils, prehistoric flint axes, lockets and African fetishes. A one-piece garment which we made her wear after an examination in the nude did not seem to affect the bewildering regularity of the arrival of her apports.

While we watched, tea-cups flew out of her hands, saucers split in mid-air, white mice appeared on the floor. At one point, a bird flew up from a point near the bottom of her skirt with a shrill cry.

Then, we sprung an X-ray examination on her. There, suspended on a belt around her waist were the apports. But how did she get them past the ladies who made her undress before each experiment? The evidence could not be challengedâ€”she hid them in the only place where delicacy would not permit a search!

The public was aroused. How much of Mrs. X’s supernatural powers was real and how much was fraud? It was impossible to be sure. I realized that even she did not recognize the tricks her mind had been playing on her.

But she had to be told.

Suddenly, she complained of a tightening feeling in her throat. In full daylight, with three other witnesses present, strangulation marks began to appear on her throat. Two blood-red half circles, a quarter of an inch wide showed up. Her hands were not raised to her throat and upon being tested for their span could not overlap as the noose mark did. The marks lasted for about 40 minutes and Mrs. X’s throat was sore for two days.

After this realistic self-hanging, the Poltergeist was no more. Mrs. X’s fantastic unconscious had used that psychological symbolism to rid her mind of its terrible “ghost.”

Obviously, she was an extreme case. Real psychical disturbances were combining with purely psychological ones to produce the state of unbalance in which she found herself. Certainly, to some extent she was a fraud. But there were aspects of the case which could not be laughed off, although there were many people who did just that.

The case of Mrs. X caused me to decide to concentrate on treatment for these disturbances instead of merely studying the phenomena themselves. Soon after, I was called in as a psychoanalyst for Miss Y. The scene was a 300-year-old cottage near London.

For eight months prior to my appearance knockings were heard on the front door between 1 and 2 a. m. Footsteps approached and the knocker was lifted. Then the cottage would resound with banging. Later, the ghost entered the house and made doors open by themselves and food disappear. The dog cowered in the shadows and the cat ran around in panic hurling herself against the window in an effort to escape.

I lost no time in informing Miss Y that she was probably haunted by her own ghost. While she had been successful in keeping some unhappy memories from entering into her consciousness, she had failed to keep them bottled up. The disturbances were a symptom of something she refused to face.

Miss Y told me her life story and I explained to her step by step just how her past was connected to the ghostly happenings. As she understood and accepted the relationship, she acted upon it.

When the knocking on the door became very loud, she put out a sign: “Please ring the bell.” And the ghost never knocked again. Little by little, as we unraveled the case, the Poltergeist stopped and finally vanished altogether. Soon, Miss Y was in perfect health again and the ghosts have never been heard of since.

Yes, I have met the Poltergeist on many occasions. But only once was I ever physically harmed by one. It was by a living Poltergeist, Lajos Pap, a Hungarian spiritualist who snatched things from spaceâ€”snakes, frogs and other crawling things.

We invited Pap to give a seance at the Institute and we were a bit wary. The London newspapers really went wild. WATCH YOUR GOLDFISH TONIGHT was the warning they gave their readers on the evening of the experiment. Pap had produced a snake after a search by Will Goldston the famous magician so what was to stop him from apporting a crocodile?

But, once he went into a trance, there was no telling what his alleged spirit guides would do.

I suspected something was wrong and apparently so did Mr. Pap’s guides. For they slapped me on the mouth during the seance (through Pap’s hand of course). Then they banged his head against the wall with such force that he suffered a concussion. That did not deter me, however, from revealing what I had discoveredâ€”the snakes did not come from thin air but from a belt, hidden in the loose folds of his abdominal flesh!

I did have a close shave a few months ago. though. And it was right here in this country.

A ramshackle Catskill cottage was supposed to be haunted by ghosts.

I found the mirrors decorated with portraits of the devil and messages such as “We are here. Beware!”‘ My hosts swore that the mirrors had been clean when they left.

But I did not like the way they tried to get out of my hearing for whispered conferences. When they proposed a strange experiment, their purpose began to dawn on me. They wanted to put a kerosene lamp on the floor to see if the ghost would turn it over.

It seems the cottage was for sale but nobody would buy it. It was clear that if the cottage was burned down by ghosts, the insurance would be enough to make the venture worthwhile. I took a hasty departure before their strange “Poltergeist” had a chance to show me the arson in his soul.

Two hundred years ago noisy ghost disturbances would have been called witchcraft and punished by death at the stake. Today, I call them the Poltergeist Psychosis and suggest they should be doctored by skilled specialists.

Some authorities still cry fake and fraud, claiming that there are no such things as psychical phenomena. They point to the admitted cases of fraud as final proof. I say, certainly there has been fakery involved but that is not the whole story. There is more to the Poltergeist than mere tomfoolery. You cannot slough off unexplainable disturbances simply because they don’t fit into any hackneyed psychological niche.

Many years ago, Tennyson wrote:

“The ghost in man, the ghost that once was man

But cannot wholly free itself from man

Are calling to each other thro’ the dawn.”

Well, the ghost in man has stepped out of the pages of poetry and fiction right into the realm of science!