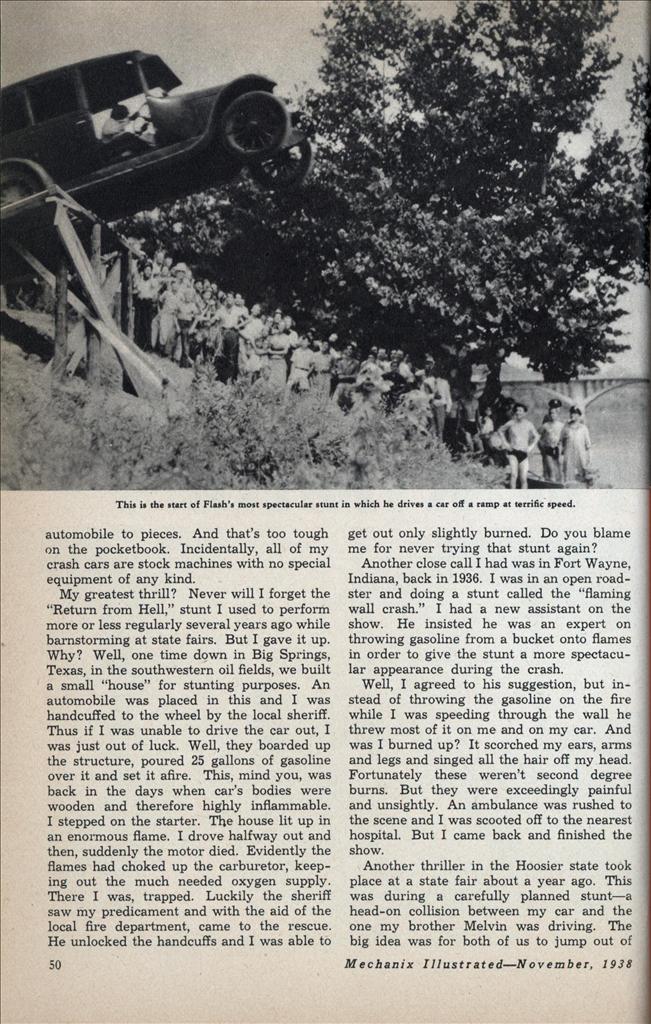 I Risk My Neck For A Thrill

Twelve years as a thrill driver hasn’t dimmed the daredevil spirit of Flash Williams, (left) America’s ace stunt man who tells what it’s like to crash a speeding car or plane.

HOW would you like to drive an automobile through a burning house? Or sit at the wheel while your car, traveling at 75 miles an hour hits another auto going at the same speed, in a head-on collision? Or maybe, if this sounds too tame and unexciting, you would prefer to drive at terrific speed over a raised platform and then hurtle through the air for a distance of 65 feet.

These are everyday experiences for me. For about 12 years I’ve been risking my neck trying almost every dangerous stunt imaginable with automobiles, airplanes and motorcycles. Just for a lark I started flirting with death at a state fair in Texas in 1926. I’ve been at it ever since and claim to have invented practically every one of the ultramodern automobile and motorcycle crash stunts.

When not doubling for a famous movie star, crashing a plane for the films, or performing some other spectacular feat for the silver-screen, I’m likely to be found touring the country with my troupe of 8 “Thrill Drivers.” Most of my stunts are performed from cars traveling at 40 to 75 miles an hour over raised platforms known as ramps. The ramps we originally used were 12 feet long and two feet high. Now they’re 24 feet long and 3-1/2 feet high-—or approximately twice as big and high as they used to be. Which means, of course that my gang of daredevils travel about twice as fast and as far as in the old days and that our work is doubly dangerous. Many a time I have made my stunt car jump, with the aid of the new type of ramp, as far as 85 feet without turning over. I claim this is the world’s record.

My newest and most spectacular stunt is the “race with death.” First two cars, going 70 miles an hour, drive down the track parallel with one car about six feet in front of the other and slightly to one side. Now, while the one car travels up over the ramp at top speed, the other car cuts to the left in front of the ramp. Thus the first car performs a spectacular leap frog. The slightest miscalculation—even a fraction of a second—means a serious crash. But fortunately there has not been the slightest of accidents while performing this feat.

Probably the most dangerous show we ever used was the “eight man jump,” which we performed regularly several years ago. Eight members of my crew would stretch out in front of the ramp and then I would drive over the platform, my car clearing the entire crew.

But on one well remembered occasion my car performed a sudden swerve and struck one of my boys, breaking his ribs. Since then the stunt has been abandoned.

Today I’m especially fond of doing a new stunt called the “moon dip.” In this I drive my car at 60 miles an hour over two ramps. This doesn’t sound especially dangerous until you bear in mind that I run the car as far over as possible on two wheels without actually turning it over. Incredible as it may sound, I’m moving at a 45 degree angle!

I achieve this stunt by practice, but never outside of actual performing hours. I have one peculiar habit—I never rehearse a stunt. Instead I figure it out ahead of time with the most precise accuracy, then “shoot the works” with my fingers crossed, at my regular show.

One of my best known feats of yesterday was the “suicide leap.” In this, speeding at 75 miles an hour, I made my car leap 75 to 80 feet, with the assistance of a large ramp. I quit doing this stunt not so long ago for the very good reason that it literally tears an automobile to pieces. And that’s too tough on the pocketbook. Incidentally, all of my crash cars are stock machines with no special equipment of any kind.

My greatest thrill? Never will I forget the “Return from Hell,” stunt I used to perform more or less regularly several years ago while barnstorming at state fairs. But I gave it up. Why? Well, one time down in Big Springs, Texas, in the southwestern oil fields, we built a small “house” for stunting purposes. An automobile was placed in this and I was handcuffed to the wheel by the local sheriff. Thus if I was unable to drive the car out, I was just out of luck. Well, they boarded up the structure, poured 25 gallons of gasoline over it and set it afire. This, mind you, was back in the days when car’s bodies were wooden and therefore highly inflammable. I stepped on the starter. The house lit up in an enormous flame. I drove halfway out and then, suddenly the motor died. Evidently the flames had choked up the carburetor, keeping out the much needed oxygen supply. There I was, trapped. Luckily the sheriff saw my predicament and with the aid of the local fire department, came to the rescue. He unlocked the handcuffs and I was able to get out only slightly burned. Do you blame me for never trying that stunt again?

Another close call I had was in Fort Wayne, Indiana, back in 1936. I was in an open roadster and doing a stunt called the “flaming wall crash.” I had a new assistant on the show. He insisted he was an expert on throwing gasoline from a bucket onto flames in order to give the stunt a more spectacular appearance during the crash.

Well, I agreed to his suggestion, but instead of throwing the gasoline on the fire while I was speeding through the wall he threw most of it on me and on my car. And was I burned up? It scorched my ears, arms and legs and singed all the hair off my head. Fortunately these weren’t second degree burns. But they were exceedingly painful and unsightly. An ambulance was rushed to the scene and I was scooted off to the nearest hospital. But I came back and finished the show.

Another thriller in the Hoosier state took place at a state fair about a year ago. This was during a carefully planned stunt—a head-on collision between my car and the one my brother Melvin was driving. The big idea was for both of us to jump out of the cars at the precise fraction of a second that they crashed. The crash occurred exactly as per schedule but I didn’t leave the car quite quick enough, whereas my brother jumped out at exactly the right moment and was unhurt. My machine turned over partially on top of me and scraped my head at the left temple. A fraction of an inch closer and it would have crushed my head like an eggshell.

Some of my accidents in Indiana have been too close for comfort. On August 7, 1937, only a near-miracle saved me from almost certain death, during a stunt never before attempted. I drove a car off a raised platform on the bank of the St. Joseph River at a terrific speed and hurtled through the air for 65 feet into the water. Striking the water at this high speed is almost as risky as crashing headlong into hard ground. The crash washed me clear out of my seat at the wheel into the rear of the car. A couple of seconds more and I was washed out the back window. I was badly stunned and scratched up but the cold water revived me and I suffered no permanent injury.

Ironically enough, one of my greatest thrills took place not long ago when I wasn’t even attempting a stunt. This was at San Angelo, Texas. I was driving back to my trailer camp after making a personal appearance at a fair. I was scooting along at about 45 miles an hour when the structure gave way and I shot over the side and dove into 25 feet of water. The car turned over completely. Incidentally, my wife was with me. Luckily neither one of us was more than slightly scratched.

Speaking of my wife—a pretty blonde—she does stunts, too. Or rather, she used to. For a couple of years one of my regular performances was to place her underneath a narrow board and then ride a motorcycle over her back. But the board gave way one day and she suffered a long sojourn in a hospital. She hasn’t stunted since.

Movies in which I’ve appeared include: “Mutiny on the Bounty,” “Hell’s Angels,” and “Perils of the Highway,” the latter a film produced by the National Safety Council of Chicago.

In “Mutiny on the Bounty” I took the part of the sailor who jumped off the spar during the hurricane and was sucked under and killed. In “Hell’s Angels,” sad to relate, the part I played in this picture was never actually shown to the general public. I died in the cutting room. Nevertheless it was a thriller if there ever was one. I cracked up the ship, after telling the cameramen exactly how to angle their cameras. But they missed the shot! Reason was, I had to come down about 200 yards away from the spot I was supposed to and they couldn’t quite catch the scene. I was supposed to be in a German plane, shot down in a dog fight at close quarters.

In “Perils of the Highway” I crashed about 20 automobiles. Ren ’em down hillsides, mountains, valleys and rough fields. This was a safety picture filmed for the National Safety Council of Chicago.

Why do the movies use so many stunt men and doubles? Well, take a striking example. It was the time Dick Grace, one of the best known stunters of all time, broke Hoot Gibson’s back. It happened during the filming of a Western picture. In a kitchen fight Hoot (who at that time insisted on doing all his stunt work himself), was pushed over a table by Grace, who portrayed the role of the villain. In the terrific struggle one of Hoot’s vertebrae was broken. This was back in 1929. Since then the movie magnates have placed a clause in the contracts of virtually all stars and featured players that prohibit them from performing any stunt that may prove dangerous. For it is obvious enough that if the star is injured, the entire production is tied up and thousands of dollars keep pouring out for salaries, property rentals and so on, with very little being accomplished in the way of progress for the picture.

Are movie stunts real or faked? Most of them these days are not faked, contrary to popular belief. This is because the camera eye is many times more penetrating and revealing than the human eye. So in order to achive the realistic effects which the movie-going public has come to demand, stunt men must be utilized. They must be highly trained in both mind and body for every conceivable type of life-risking feat. Last year at a state fair in Minnesota, I took a number of tests showing my reaction time to various stimuli while driving a car. I had the quickest time of anybody who took the tests. Which is just as well. For a fraction of a second means everything in the life of the stunt man.