Mechanix Illustrated
Issue: Feb, 1949
Posted in: General
4 Comments on I Rode on a HIGHWAY OF DIAMONDS (Feb, 1949)

It’s amazing how the author can detail the way De Beers exploits, harms and kills it’s workers while creating an artificial monopoly and not let a hint of criticism into his voice. 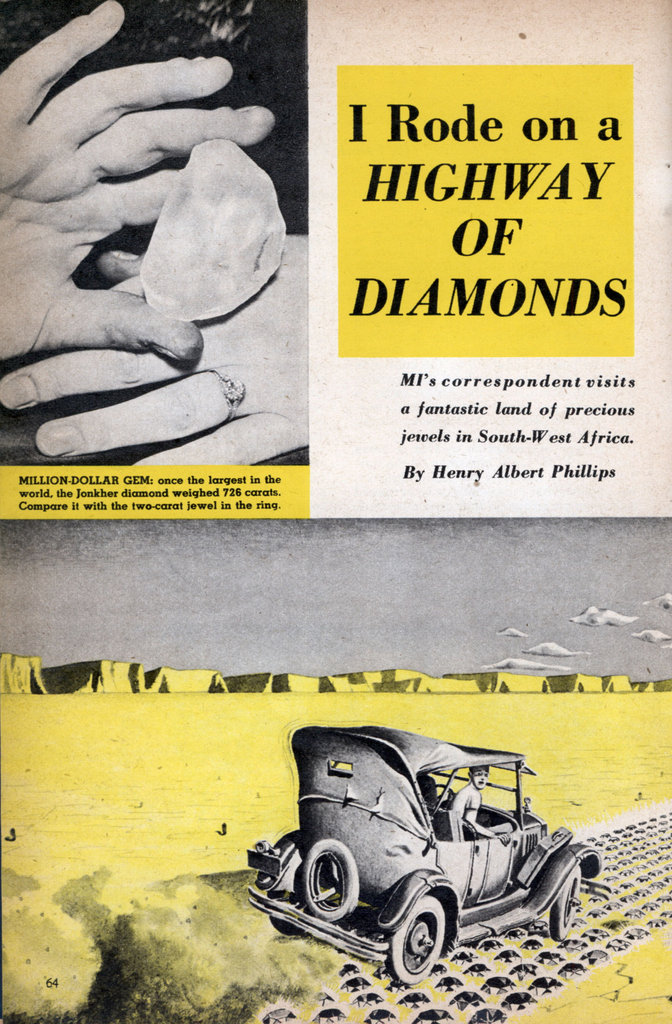 I Rode on a HIGHWAY OF DIAMONDS

You are approaching diamondiferous territory. TURN BACK! Trespassers are liable to suffer bodily harm, a fine of 500 pounds or five years in gaol.

THAT’S the sign which greeted me a couple of miles outside of Luderitz in South-West Africa. Inside the ominous -looking gates was the diamond country— soil and sand laden with precious gems like almonds in a Hershey bar. I had imagined what the land of diamonds was like and I was about to see for myself at last.

For five days I had traveled on one of the world’s worst railways going from Johannesburg across the Namib desert to Luderitz. There, I was picked up by old Schweiger, a company hired-hand who was driving the car the De Beers people had sent to fetch me to the mines at the other end of the diamond fields at the mouth of the Orange River.

We came to a gate in the high wire fence and an armed guard stepped out of a little house. He turned to Schweiger as though I weren’t there. ”Credentials? Where did he come from? What does he want?” For a moment I thought he was going to turn the German police dogs on me that were sniffing and snarling around us.

Finally I signed a document waiving all rights and claims to indemnity in case of ” accident and the gate was unlocked. As it creaked open our car shot through into the forbidden land of precious gems.

Disappointing, I thought, as we passed over the broad desert road. The land was as bald of vegetation as sandpaper—but red-hot sandpaper.

“You know, my friend,” Schweiger said, “you are now driving over a highway paved with diamonds. This ground is filthy with gems and when the road was paved it was far too much trouble even to attempt to separate the diamonds from the gravel!”

Suddenly, Schweiger stopped the car and jumped out. I followed. He picked up a crystal stone the size of a prune pit and placed it in my hand. “Six carats. Pure white. Over the counter in London it’d bring 5000 pounds.”

My palm itched. The tall stories were true! It was easy to see now why they had all that barbed wire, armed guards and man-eating dogs. I noticed Schweiger watching me closely so I let the $20,000 diamond fall back into the sand like a fish into the sea.

We got back into the car. I pulled my helmet down and squinted at the most desolate and poverty-stricken stretch of land I had ever seen. So this was the kind of hell hole where they mined those precious stones that beautiful women are so proud of!

“Why don’t they have an army of diggers, shoveling out the stones?” I asked.

“If they unloaded the diamonds on the market at that rate, they wouldn’t be worth sixpence. These alluvial fields threatened to disrupt the whole market some time ago and ruin De Beers. So they leased the entire area and regained control of 95 per cent of the world output. They control all sources and sales—and thus control the price of every carat Did you know it is illegal for an individual in South West Africa even to possess an uncut or unset stone?” – We drove along the ragged roadbed and I looked about me at the great stretches of monotonous sand, the blue mountains to the south and the violent green sea. Schweiger continued, “I guess you can’t blame the natives for being superstitious about diamonds. They call them ‘devil stones’ because they think there’s a devil in each stone that’ll bring someone bad luck.”

“I had a chum in the Camel Corps, once,” Schweiger went on. .”Rum got him down and he became an illicit diamond buyer, called I. D. B. here. He had a racket he worked with the natives who lorried in our supplies. One crew smuggled in a dog on every trip. Somehow he was fed a piece of meat studded with diamonds and then let loose at the gate. When he wandered outside the area, he was shot for what he had inside of him. Of course, the law caught up with my chum and now he’s out of jail and a beachcomber instead.”

“Living off his profits?”

Schweiger disregarded me. “Two per cent of all the diamonds produced probably slip through and get into the hands of I. D. B.’s.”

About 350 ” ~ ~ white people and twice as many natives make up the population. They’re all subject to daily searches, and constant sifting and sorting of their belongings. Their only human contact with the outside world is the lorry caravan which brings in supplies to enable them to keep up the search for more diamonds. And even the lorry men keep their distance for fear of arousing suspicion.

The superintendent, Schweiger and I set out in a jeep at daybreak for the mine diggings. We visited several pits, each approximately 10 miles square. The whole system has been standardized. First, they dig a “prospect” trench straight across the sand from the ocean to the sand dunes. Twenty white bosses and 70 Negro diggers toil on that job for three months or more. It may turn out to be a dud or it may be worth a million dollars—there’s no telling.

“Prospectors first found diamonds high up in those mountains,” explained the superintendent. “But through all these centuries, the Orange River has been gnawing and tearing through the diamond-bearing formation, bringing the treasure down here. This whole coast has been plastered with six feet of sludge, pulverized rock and debris, studded with precious stones. Listen!” he pointed solemnly out to sea. “I’ll bet there are millions of carats out there on the bottom of the ocean.”

Several hundred natives were digging in gravel. Each gang had its own sieve or vibrating machine into which shovelfuls of soil were tossed. Screenings were brought to a mine boss for a first sorting. While we watched, the super picked out seven carats.

Promising gravel is transported all the way back to the main works for the experts to look over. They figure on one carat out of every 3-1/2 cubic yards of matter and a hand-full of diamonds from 700 tons of sand.

One of the natives gave a loud yell. “He’s found a big one,” said the superintendent. “He isn’t allowed to touch it, only point and yell.” The digger had discovered a ten-carat stone worth at least $25,000. He got a bonus of 10 cents a carat for finding it.

One native had once “pointed” 58 carats in a single day—or $5.80 worth for him. It was a fortune to the man for his wage out there in the broiling desert is ninepence per day for the first year. If he lives through the second year of devastating sunshine and lung-destroying dust, his pay is raised to two shillings and sixpence per day.

“I should think these natives would be tempted now and then to swallow a diamond or two,” I remarked.

“Sure, they’re always swallowing them, but we keep a watchful eye open. If castor oil fails, then an operation will succeed. Last year one worker swallowed 21 stones valued at $20,000. Unfortunately, the operation killed him.”

Every day at 4:30 p. m. the take in diamonds is brought in to be counted, weighed and registered. The brass, pint-sized cylinders are unlocked and the contents dumped in separate heaps on a table with a raised edge.

Every stone over five carats must be given an identity and character. Its history must be accounted for until it passes into the hands of a retail customer. The average yield of Orange River Mouth is 16,000 carats a month.

Millions of dollars’ worth of diamonds lying around loose give you a queasy feeling. It’d be so easy to pick up a few thousand dollars’ worth and hide them in the heel of your shoe, the lining of your coat—you think of all the possibilities. But can you get away with it?

Before you leave, your traveling things— everything you don’t have on your back—are sent ahead to the examination station at the gate. If you are a native you are detained for one week in the pen and given a knockout purge.

The day we pulled out, I was even suspecting myself. Just before we reached the gate, Schweiger stopped the car before a baked-brick building that resembled a mausoleum. A little man with a mortician’s smile appeared and invited us in for a cup of tea. As I drained my cup, he rose, rubbed his chubby hands together and pointed to the back room. “I trust you won’t mind—just a formality you know,” he said gleefully.

For a moment I was afraid he was going to operate, just to make sure I was not getting away with a bellyful of diamonds. But, no. They have devised a more humane way of peering into internal hiding places. I was helped into a sheet, stretched out on a cold metal slab—and X-rayed.

As we drove along the winding desert road after the De Beers gate had closed behind us I thought of the civilization which treasures the pieces of stone mined by those sweating workers at Orange River. Suddenly, the wheels of the car went over a rock. Almost hopefully, I looked out of the window, half-expecting to see a large diamond lying in the road. But of course it was strictly a non-precious rock. The fabulous highway of diamonds was securely locked in behind those carefully-guarded gates. •