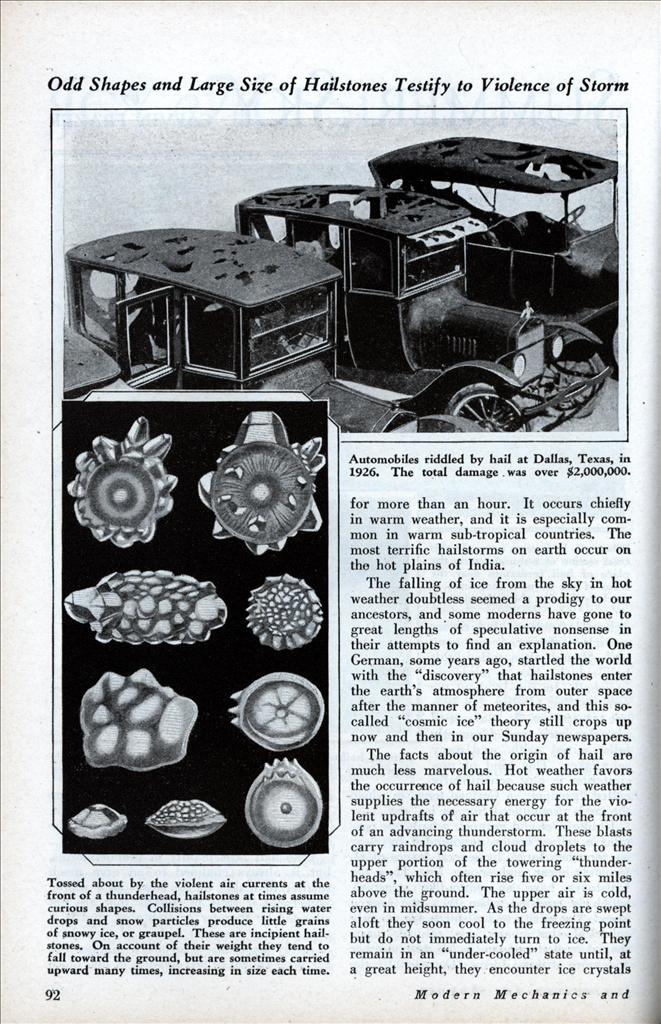 A lump of ice that falls from the sky is not necessarily a hailstone. It may be sleet; in which case it looks like what it actually is—a frozen raindrop. Sleet particles are roundish or angular and mostly transparent. They are the size of coarse birdshot, and they fall when the weather is cold, but not intensely so; when, in other words, the temperature is somewhere around the freezing-point (32° Fahrenheit).

Sleet does not cling to branches, wires and the like, but it often falls in conjunction with rain, and the latter may form a coating of smooth, clear ice on such objects. This coating is known to science as “glaze”. Another kind of ice particle differing from true hail—though often called “soft hail”—looks like a miniature snowball. Its size is about the same as that of sleet, but it is not transparent. It is a sort of granular snow and frequently falls mixed with ordinary snowflakes. This kind of precipitation is now scientifically called “graupel”, a German term, in which the au is pronounced like ou in “out”.

Unlike sleet and graupel, a hailstone contains a snowy center, surrounded by clear ice, or when large, by several layers of alternately clear and snowy ice. Thus big hailstones have an onion-like structure, which is revealed when they are broken open. A majority of hailstones are roughly spherical, but many are conical, pear-shaped or flattened, and some assume other and more striking forms. Occasionally the surface is encrusted with curious crystalline growths. Hailstones vary greatly in size. The smallest are smaller than peas, and the biggest bigger than oranges.

True hail falls mainly in thunderstorms, but is always confined to an area much smaller than that of the storm as a whole. Sometimes it falls in squalls that are not attended by thunder or lightning, and it is also a rather frequent feature of tornadoes. It rarely lasts more than a few minutes but has been known to fall steadily in one place for more than an hour. It occurs chiefly in warm weather, and it is especially common in warm sub-tropical countries. The most terrific hailstorms on earth occur on the hot plains of India.

The falling of ice from the sky in hot weather doubtless seemed a prodigy to our ancestors, and some moderns have gone to great lengths of speculative nonsense in their attempts to find an explanation. One German, some years ago, startled the world with the “discovery” that hailstones enter the earth’s atmosphere from outer space after the manner of meteorites, and this so-called “cosmic ice” theory still crops up now and then in our Sunday newspapers.

The facts about the origin of hail are much less marvelous. Hot weather favors the occurrence of hail because such weather supplies the necessary energy for the violent updrafts of air that occur at the front of an advancing thunderstorm. These blasts carry raindrops and cloud droplets to the upper portion of the towering “thunder-heads”, which often rise five or six miles above the ground. The upper air is cold, even in midsummer. As the drops are swept aloft they soon cool to the freezing point but do not immediately turn to ice. They remain in an “under-cooled” state until, at a great height, they encounter ice crystals or snowflakes. Contact with these solid particles causes them to freeze instantly just as, in cold weather, the droplets of a drifting fog change suddenly to ice when they encounter trees or other obstacles, forming deposits of “rime”.

Collisions between the rising water drops and the snow particles produce little grains of snowy ice, or graupel. These are the . incipient hailstones. On account of their weight they tend to fall toward the ground, but in the turmoil of the thundercloud, which contains both rising and descending air currents, they are often carried alternately upward and downward several times before finally dropping to earth. At a high level a hailstone is coated with snow; at a low level it acquires a layer of water, which changes to clear ice in the course of a subsequent ascent. Thus the concentric layers seen in a big hailstone tell the story of several journeys back and forth between the upper and lower portions of the storm.

Incidentally, the size eventually attained by a hailstone depends upon the strength of the upward blast of air that supports it just before it falls to the ground. Big hailstones imply the occurrence in the thunderstorm of terrific vertical winds, which constitute a much greater danger to aircraft than the lightning that also accompanies such storms. It has been calculated that to enable a hailstone to attain a diameter of 3 inches the updraft of air must amount to from 92 to 125 miles an hour, according to the density of the ice in the hailstone. The corresponding figures for a hailstone 5 inches in diameter—a rare but not unheard-of size— would be from 185 to 250 miles an hour.

The largest hailstone positively known to have fallen in the United States was 17 inches in circumference and weighed l1/2 pounds. It fell at Potter, Nebraska, on July 6, 1928. Larger hailstones have been reported from other parts of the world, but there is much uncertainty about these reports. Extraordinarily big masses of ice picked up after hailstorms are usually the result of the freezing together of two or more hailstones while lying on the ground.

Among the many fictitious or questionable stories told about hail are those that report the finding of live turtles or other forms of life embedded in hailstones. When such creatures have actually been found in hail we may assume that the hail froze around them after it fell. There is, however, a well-authenticated case of a hailstone that brought down from aloft a living sphinx moth.