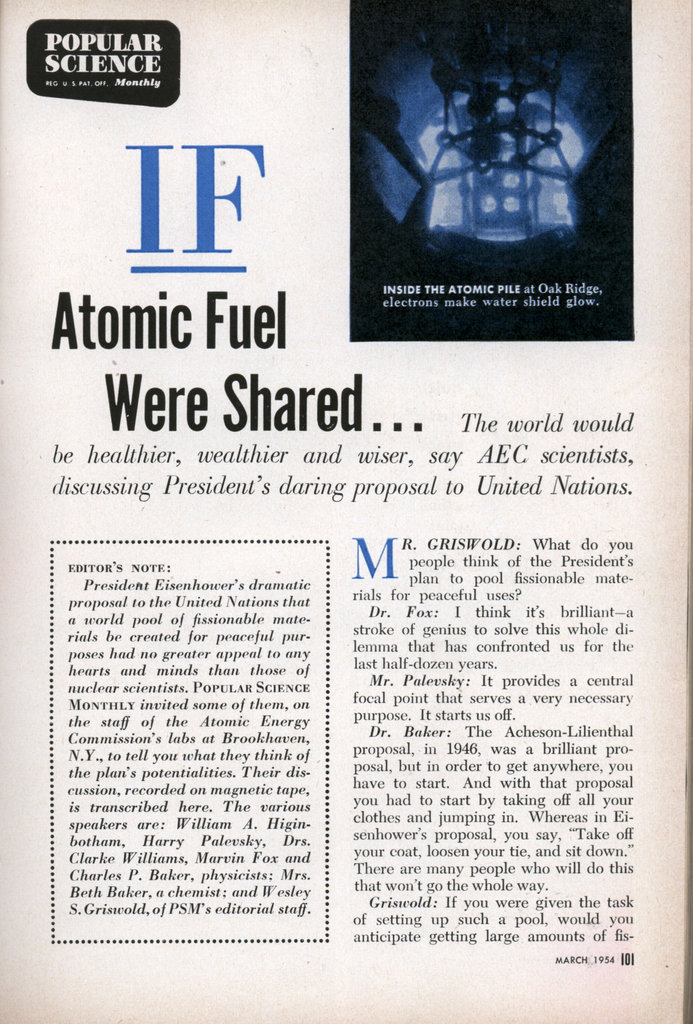 MR. GRISWOLD: What do you people think of the President’s plan to pool fissionable materials for peaceful uses?

Dr. Fox: I think it’s brilliantâ€”a stroke of genius to solve this whole dilemma that has confronted us for the last half-dozen years.

Mr. Palevsky: It provides a central focal point that serves a very necessary purpose. It starts us off.

Dr. Baker: The Acheson-Lilienthal proposal, in 1946, was a brilliant proposal, but in order to get anywhere, you have to start. And with that proposal you had to start by taking off all your clothes and jumping in. Whereas in Eisenhower’s proposal, you say, “Take off your coat, loosen your tie, and sit down. ” There are many people who will do this that wont go the whole way.

Griswold: If you were given the task of setting up such a pool, would you anticipate getting large amounts of fissionable materials, or small amounts? Mr. Higinbotham: The fact is that no countries except Russia and the U. S. (which are well stocked) and England and Canada have the capital to buyâ€”or, as a matter of fact, have access toâ€”a substantial amount of source materials.

You see. thorium is useless until you’ve gone a long way with uranium and its products. And the U. S.. Great Britain and Canada have virtually cornered the free-world market in uranium.

Palevsky: So the three of us and Russia control all the source materials, except for truly trivial quantities.

Higinbotham: The U. S. and Russia control a lot of materials, but they don’t own them. I think the first step is to get these two major parties to loosen up on their controls, so that other people can play around.

Griswold: You think, then, that it would be ores that would be contributed to this pool, and not enriched stuff?

Grisuold: How would you ship the materials to the pool?

Higinbotham: I suspect that you are thinking of this pool as a big concrete building somewhere, loaded with radioactive stuff. It seems to me that what Eisenhower contemplates will be a holding company, like the AEC. The stuff will be stockpiled all over the world. It will go by the pound or the truckload or the shipload direct from the donor to research laboratories in different countries all over the world.

Griswold: Is it dangerous to ship? Would it require shielding?

Fox: Not in ore form.

Fox: Well, uranium is shiny silver when freshly made but tarnishes to brown or black quickly when it’s exposed to the air.

Griswold: I’ve heard that it can be obtained in fairly small ingots, almost the size of flashlight batteries.

Fox: You can get it in any size you like.

Griswold: What countries besides the ones you have already mentioned would be likely to have surplus fissionable materials for the world pool?

Baker: I think you should include the Belgian Congo, South Africa and Czechoslovakiaâ€”if you can distinguish that country from Russia.

Higinbotham: You’d also include India and Brazil, wouldn’t you?

Higinbotham: India and Brazil would most assuredly be interested in the power potentialities of a world atomic pool. Brazil is peculiarly poor in water resources. The waterfalls are a long way from the coast. The Amazon is flat for many, many miles inland. I think the Brazilians are working small streams mostly.

As a result, Rio and Sao Paulo, the two biggest citiesâ€”about 200 miles apart with decidedly mountainous country betweenâ€”have a common power supply. And they are so hard up for electricity that the different sections of the cities are shut down in succession.

Griswold: Is it possible that we can have smaller atomic power plants than any yet builtâ€”plants that could be used, say, to run planes and trains?

Higinbotham: Well, the only possibility in this line is that someone might design a really good battery that you could have charged at an atomic power station, and then run your car by electricity.

Palevsky: That’s true. If you can make cheap power, there are just unlimited processes that could be developed.

If you can reduce the cost of power by, say, 20 or 30 percent, I think that many new industrial processes would just spring up overnight. They will then be feasible.

Griswold: How could atomic power be useful in barren landsâ€”like Arabia or the Australian desert?

Palevsky: Why, in making fertilizer. You need power to make fertilizer.

Griswold: Yes, but what about water?

Water would still be the essential ingredient, wouldn’t it?

It’s not a matter of discovering any fundamentally new principle. It’s a matter of getting the science, the technology and the economics together.

Palevsky: Even in those desert regions, I think if you go down far enough, you get water. It just happens to be uneconomical to pump it now. But cheap power from atomic energy would easily make the pumping job feasible.

Mrs. Baker: Well, you’d pollute your rivers, for one thing.

Palevsky: And if you dropped an atomic bomb into the eye of a tornado, you’d scatter lethal radioactivity all over the countryside.

Baker: The Eastman Kodak Company would certainly be unhappy. [Laughter. ] Griswold: If the proposed atomic pool is going to exist in several different places, scattered throughout the world, how can it feasibly be guarded?

Higinbotham: First, is it worth guarding? Probably all the material contemplated for the pool will not be enough to make a single atomic bomb. And when the atomic bombs in the world already are counted in the hundreds or the thousands, material that could possibly make one more is not really important.

Griswold: Isn’t it true that, with the right kind of reactor and the necessary raw material, in the course of making atomic power you also make plutonium?

Higinbotham: Yes, but it isn’t until you have really big power plants that the amount of plutonium you are going to produce in a year will be significant.

Baker: Besides, in order to make this plutonium useful, you would have to run your plant in a particular way and it would involve certainly an equivalent plant to extract the plutonium. In other words, if you went and looked at the power plant, you wouldn’t need to be a detective to tell if people were Africa, and now had plutonium, where would you send the plutonium?

Baker: Send some back to South Africa, so that they can start their power plant.

That is, I would think that if the pool delivers uranium to somebody and they use it in a power plant, and use the power for their benefit, then the plutonium which they make incidentally should, of a certainty, belong to the pool and might be sent to help make a quart of milk for every Hottentot, or whatever else seems to be a worthy undertaking.

Mrs. Baker: Essentially, then, you could just rent the material, and then pay it back to the lender.

Higinbotham: It would be ideal if, when we allow another nation to take from the international pool certain material that had been allocated to us, we would also permit that nation’s scientists to visit our laboratories, see our reactors, learn our techniques. Some of our scientists, too, would be expected to go to those countries and help them get started on their researchâ€”let them in on our know-how.

Williams: The information is fully as important as the materials, if not more so.

Higinbotham: This proposal of Eisenhower’s really will be something that will be awfully hard for the Russians to turn down.

If you can get a start at talking on a practical level about these problems of the exchange of information and people and cooperation, there will certainly be an entirely different atmosphere from the one we’re presently living in.

And one could hope that out of these discussions would come something at least as attractive as the Eisenhower proposal, and that this would be the beginning of breaking down the iron curtains that exist not only around Russia but around a good many of the rest of us, too. end