I’m always surprised at the quality and impartiality of Sexology’s articles. This article discusses a lot of the consequences of abortion being illegal that are just as applicable today. It’s interesting to note that nowhere in this article does does it mention the “right to life” or abortion being murder, the focal points of today’s anti-abortion movement. One issue I did have is that the author seems to assume that all illegal abortions are done by doctors as opposed to hacks and back alley shysters. Obviously this makes a big difference in the quality of care and chance of complications. 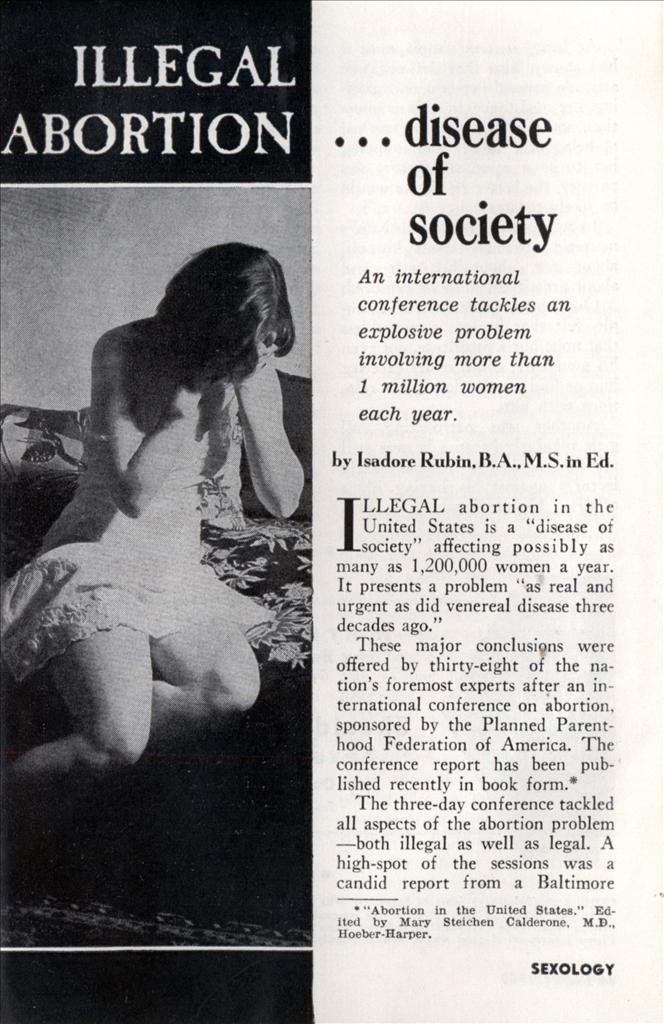 ILLEGAL abortion in the United States is a “disease of society” affecting possibly as many as 1,200,000 women a year. It presents a problem “as real and urgent as did venereal disease three decades ago.”

These major conclusions were offered by thirty-eight of the nation’s foremost experts after an international conference on abortion, sponsored by the Planned Parenthood Federation of America. The conference report has been published recently in book form.

The three-day conference tackled all aspects of the abortion problem â€”both illegal as well as legal. A high-spot of the sessions was a candid report from a Baltimore physician who had performed 5,210 illegal abortions. In spite of the stigma attached to the term abortionist, this doctor, G. Lotrell Ti-manus, was a highly-qualified and professionally-minded physician.

Dr. Timanus told how, in a period of thirty years, he had built up a roster of 353 physicians who sent patients to him for abortion. Seven of his patients were physicians themselves, while 58 were doctors’ wives and 270 were graduate nurses.

At one point in his career, Dr. Timanus reported, he had retired, but resumed practice after “at least twenty doctors told me how serious it was that I do some work.”

Not long after, he was prosecuted, fined $5000 and forcefully retired after a six-month jail sentence.

Dr. Timanus figures on the number of abortions he had performed seem exceedingly high; but they shrink in comparison with the 40,000 abortions which Dr. Timanus estimated had been done over a period of fifty years by one physician he personally knew.

At the height of his activity this second doctor was averaging 25 illegal abortions a week, or about 1,300 a year. This, incidentally, is exactly twice the figure of all the legal, or therapeutic, abortions performed in all of New York City during the same period of time!

Since the vast majority of abortions in the United States are illegal, it is impossible to estimate the number exactly. Commonly given figures range from 200,000 to 1,200,000 a year, with many authorities tending to accept the larger figure.

One doctor, Sophia J. Kleegman, told the conference about a “new racket.”

“A woman seeking an abortion,” she said, “calls up a doctor. Another doctor, usually with a nurse, comes to her home by arranged appointment. She does not know this doctor, has never seen him before, and probably will never see him again. She has the abortion performed in her own home, with a fee in proportion to such a service.

There was considerable disagreement expressed at the conference concerning the effect of illegal abortions on the women involved.

Dr. Timanus had kept careful records of his patients. This is the largest group of such women that have ever been studied. It was more than four times the number of women who had abortions among the group studied by Dr. Alfred Kinsey and reported on by him at the conference. (See Sexology, Sept. 1958.)

Dr. Timanus reported that he had received a number of letters from patients telling him that they had subsequently become mothers. “I do not believe,” he told the conference, “that a properly performed abortion can ever cause a woman to become sterile.”

He reported also that every one of the women he had operated on had been able to leave his office that same day, and that not one had ever developed peritonitis, an inflammation always to be feared in such abortion operations.

Other doctors present however who were familiar with the results of autopsy in large cities cited a number of cases where death had come from illegal abortion.

Particularly stressed was the grave danger of self – induced abortions, which involved the insertion of various objects, medicinal substances, injection of fluid into the womb, or the insertion of corrosive chemicals.

Dr. Warren O. Nelson, medical director of the Population Council of New York, warned of the danger of certain drug compounds which are being used to induce abortion in the early stages.

“All these compounds,” he said, “are dangerous on two counts. First, great danger exists in their uncontrolled use because, although they may kill the fetus, they may also have disastrous effects on the bone marrow (of the mother).

“Second, if the embryo is not killed, the subsequent incidence of developmental anomalies is high.” That is, the infant develops serious physical or mental abnormalities.

There was considerable difference of opinion on the mental effect of abortion. A number of psychiatrists stressed the fact that abortion causes adverse mental reactions in the woman. Others pointed out that for every woman thus affected by abortion; there are many more women even more seriously affected from the reaction to unwanted pregnancy and motherhood.

Dr. Theodore Lidz, professor of psychiatry at the Yale University School of Medicine, described some of the unfavorable reactions of women who have had abortions.

The first general reaction, he pointed out, is a feeling of guilt at doing away with the baby. This reaction may be based on religious or cultural training, or it may be based on an instinctive feeling that she is destroying something that is part of herself.

There is also some degree of loss of self-esteem at being willing to forego having a baby in order to achieve some other goal.

Many women get a fear of retaliation, which may express itself in the feeling that because of the abortion they may not be able to have children or that they will develop a cancer.

Some women are so concerned about whether they can ever bear children again that they cannot rest until they have proven to themselves that they can conceive again. This may explain why many women have repeated pregnancies before marriage.

If the abortion was performed at the insistence of the husband, the woman may harbor all sorts of resentments against him. She may resent his desire to have intercourse, to have what he wants, while she must degrade herself by having an abortion.

Another expert in this field. Dr. Harold Rosen of the Johns Hopkins Hospital, noted that psychiatrists often see patients who accuse themselves of being “murderesses.”

Some patients, after an abortion, deliberately punish themselves or their husbands by forcing the husband to undergo a vasectomy operation for sterilization. Others castrate their husbands, usually emotionally, but occasionally even in actuality.

On the other hand, a recent study in Norway found practically no psychological reactions following abortion. Of the group of women studied, only two showed any reaction to the abortion and their reaction was just a feeling of distress and embarrassment that lasted for a few weeks and disappeared.

Dr. Kinsey, speaking as a biologist, expressed considerable disagreement with many of the conclusions drawn by the psychiatrists.

We have no right to assume, he asserted, that the disturbances found in patients who had abortions were necessarily the result of the abortion. These same disturbances may have resulted from other situations as well.

Dr. Kinsey also took sharp issue with the view expressed by many of the psychiatrists that all abortionsâ€”legal as well as illegal â€”are psychologically harmful. In this view, frustration results be-cause the woman has failed to “fulfil her biological function.”

According to this logic, the same frustration should also follow from sterilization and birth control, he said.

“How far would you carry this matter of frustration of reproduction?” Dr. Kinsey asked.

Citing the oft-heard statement in medical texts that “menstruation represent the red tears of a frustrated uterus,” Dr. Kinsey continued : “Would you say that a uterus is frustrated if it does not have an implantation each and every month ?”

However, despite these differences of opinion, there was agreement that any unfavorable reaction from abortion would be apt to be less severe and frequent in cases sympathetically planned than in those forced to illegal action through lack of proper counsel and help.

The experts at the conference made a number of recommendations to bring about a reduction of illegal abortion with all its possible dangers.

They suggested that medical, psychological and social studies of women seeking abortion should be undertaken in order to find out the background of the women involved, the reasons for their desire for abortion, and the results of the operations.

Another recommendation was that consultation centers, modeled after those now operating in Scandinavian countries, should be opened under joint medical and sociological auspices. Women seeking abortions could come to those centers and discuss their problems.

At the present time, one doctor pointed out, “the average unwillingly pregnant woman does not know what to do or where she can air her situation comfortably and quietly and confidentially. Her only recourse at present is to go to a local physician, and, under the present standards, he is afraid even to look at her. He has no recommendations to make to her. So, consequently, she goes to an abortionist.”

Consultations at these centers, said the experts, would “help women realize that abortion, whether legal or illegal, may not be the best or only solution. Discussion may persuade a woman to follow a far more constructive course.,, Very often women who desperately hunt for abortionists are not even pregnant.

One of the aspects of the problem which struck the participants at the conference was that women who come from high income brackets have a much greater opportunity of being granted legal, or therapeutic, abortions.

The conference also deplored the fact that contraceptive information was more readily available to the educated and financially privileged than to the underprivileged.

They urged that birth control advice should be freely available to all who want it, as one of the means of decreasing the illegal abortion rate.

They also placed considerable emphasis on the need for early, continued and realistic sex education. This would encourage higher stand-ards of sexual conduct, and a greater sense of responsibility toward pregnancy and motherhood.

Finally, the experts suggested, a model abortion law should be drawn up by authoritative bodies to replace the present state laws, which vary from state to state and are far too vague to provide any guidance for the physician.

Practices concerning the approval of therapeutic abortions vary from city to city and even from hospital to hospital within the same city. And most doctors are in a quandary as to when an operation is permitted by law and when not.

“Present laws and mores have not served to control the practice of illegal abortion,” the participants declared. “To keep on the books, unchallenged, laws that do not receive public sanction and observance is of questionable service to our society. . . . The abortion problem must become the candid concern of physicians, sociologists, educators, religious leaders, lawyers, legislators, demographers and other responsible citizens. It is only by the most courageous and honest action of these groups working together that this urgent problem (of illegal abortion) can be solved.”