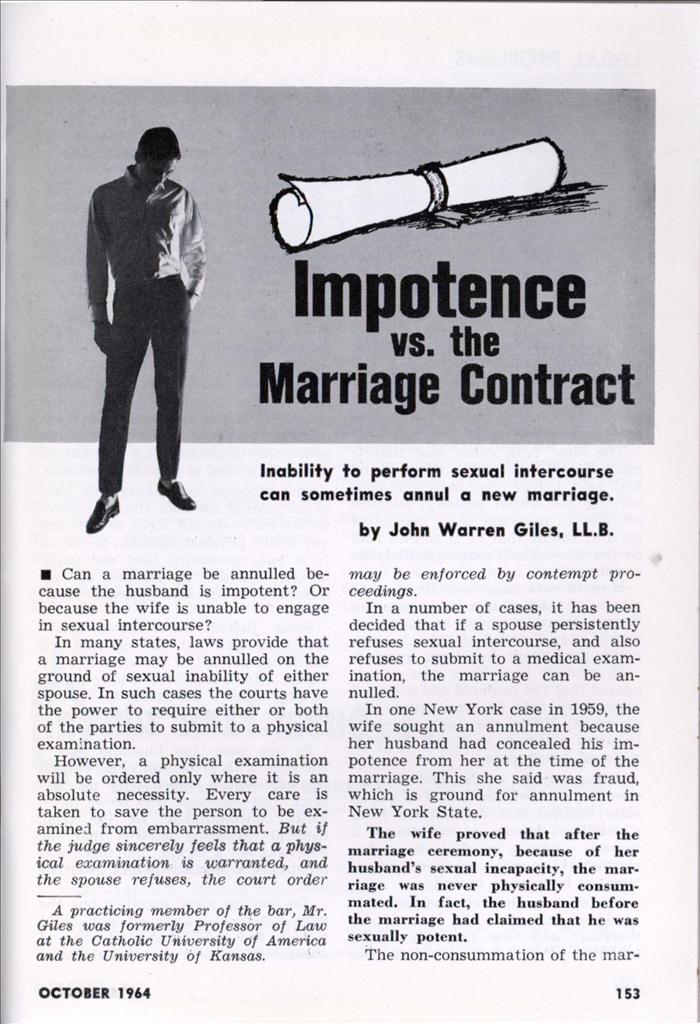 However, a physical examination will be ordered only where it is an absolute necessity. Every care is taken to save the person to be examined from embarrassment. But if the judge sincerely feels that a physical examination is warranted, and the spouse refuses, the court order may be enforced by contempt proceedings.

In a number of cases, it has been decided that if a spouse persistently refuses sexual intercourse, and also refuses to submit to a medical examination, the marriage can be annulled.

In one New York case in 1959, the wife sought an annulment because her husband had concealed his impotence from her at the time of the marriage. This she said was fraud, which is ground for annulment in New York State.

The wife proved that after the marriage ceremony, because of her husband’s sexual incapacity, the marriage was never physically consummated. In fact, the husband before the marriage had claimed that he was sexually potent.

The non-consummation of the marriage was proven by the testimony of her physician, who stated that she was still a virgin. The husband was also examined, but he refused to allow his doctor to testify as to his sexual condition. The doctor could not testify without the permission of his patient.

The New York court said that it made no difference what the husband had said before the marriage concerning his sexual potency, because an offer of marriage by a man is as good as saying that he is potent. And so the New. York court granted the annulment.

Many courts have considered cases where impotence has been assumed from a refusal to have sexual intercourse over a period of time. In such cases, annulment has been granted.

In another New York case, it appeared that the husband and wife had never been able to consummate the marriage. While the husband made frequent attempts to do so, the wife suffered great pain.

Apparently the wife’s physical structure was perfectly normal. Two physicians testified that she suffered from a condition known as vaginismus, a nervous condition in which the vagina contracts in a spasm whenever an attempt at intercourse is made.

The court said that it is not necessary for a physical defect to be shown. It stated that excessive nervousness making sexual intercourse practically impossible on account of pain was a kind of female impotence.

One problem in making this kind of decision is the fact that women— unlike men—do not have to perform any active physical function in coitus. It is only necessary that she make herself available. In the case of vaginismus even this is not possible, however.

Some British cases have established the fact that the repeated and continued refusal of the wife to have sexual intercourse over a long period of time allows the court to assume that she does not have the capacity to engage in sexual intercourse.

In one case, the husband was a widower with grown-up children and the wife was a widow with no children. The marriage was never physically consummated. At the trial, medical testimony showed that the wife was not a virgin, and there was no apparent physical defect in either party.

Where an annulment is sought on the ground of incurable impotence based on persistent refusal of sexual intercourse, the refusal must be repeated or continued over a considerable period of time. There must be no suspicion that the refusal may be due to a condition which is only temporary.

In order to be sure that the impotence claimed was not temporary, the courts in England and the United States formally adopted the rule known as “triennial cohabitation.” This meant that if the parties lived together for a period of 3 years and sexual intercourse was refused by one of the parties throughout that long period, then the courts could rightfully assume impotence of the offending party without direct medical proof.

However, this 3-year rule was considerably relaxed in later decisions. In Scotland the concept of a reason-

able time has been determined to be as short as 3 months. And in a New Jersey case, the court held that 2 months of refusal of sexual intercourse was sufficient to claim impotency.

If a person seeks an annulment on the ground of sexual impotence as shown by a persistent refusal of sexual intercourse, he or she must show that after having learned of the suspected impotence prompt legal action was taken. One must be very careful not to continue, as it were, “to sleep on rights.”

If there is a long delay in bringing the action, a very heavy burden of proof is placed on the party seeking the annulment. Of course, the courts are not unaware of the fact that a husband may find his wife unresponsive and in view of his love for her might hope, by patience and tenderness, to win her over. Such conduct might justify what appears to be an unreasonable delay in bringing any action.

One final point: The impotence or sexual inadequacy must be incurable. Otherwise the court may very likely refuse to grant an annulment.