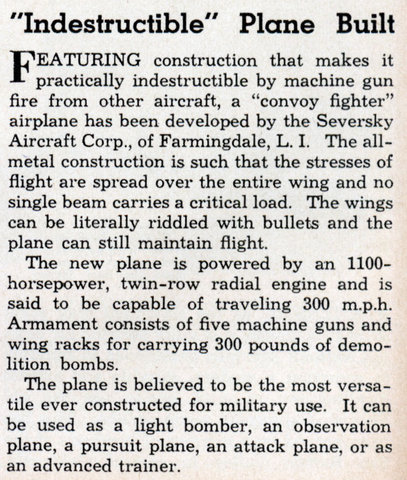 FEATURING construction that makes it practically indestructible by machine gun fire from other aircraft, a “convoy fighter” airplane has been developed by the Seversky Aircraft Corp., of Farmingdale, L. I. The all-metal construction is such that the stresses of flight are spread over the entire wing and no single beam carries a critical load. The wings can be literally riddled with bullets and the plane can still maintain flight.

The new plane is powered by an 1100-horsepower, twin-row radial engine and is said to be capable of traveling 300 m.p.h. Armament consists of five machine guns and wing racks for carrying 300 pounds of demolition bombs.

The plane is believed to be the most versatile ever constructed for military use. It can be used as a light bomber, an observation plane, a pursuit plane, an attack plane, or as an advanced trainer.