It seems like this would just get stuck in the mud. Also, where do you store fuel and ammo? 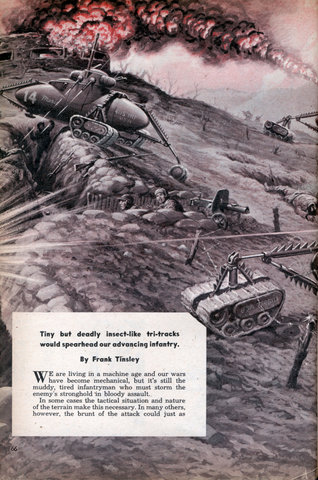 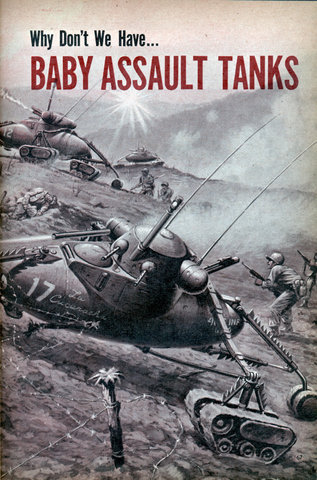 Why Don’t We Have… Baby Assault Tanks

Tiny but deadly insect-like tri-tracks would spearhead our advancing infantry.

WE are living in a machine age and our wars have become mechanical, but it’s still the muddy, tired infantryman who must storm the enemy’s stronghold in bloody assault.

In some cases the tactical situation and nature of the terrain make this necessary. In many others, however, the brunt of the attack could just as well be absorbed by light, heavily armed machines. Why, then, can’t we send in a first wave of baby assault tanks and use our irreplaceable GI’s for the less hazardous chore of mopping up? 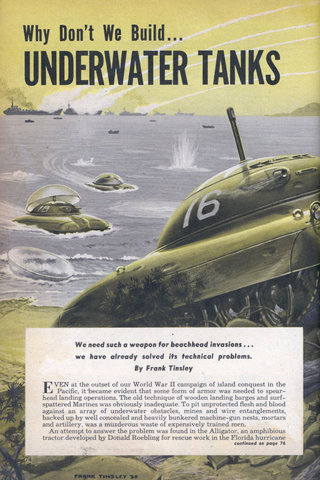 Why Don’t We Build… Underwater Tanks

We need such a weapon for beachhead invasions … we have already solved its technical problems.

EVEN at the outset of our World War II campaign of island conquest in the Pacific, it became evident that some form of armor was needed to spearhead landing operations. The old technique of wooden landing barges and surf-spattered Marines was obviously inadequate. To pit unprotected flesh and blood against an array of underwater obstacles, mines and wire entanglements, backed up by well concealed and heavily bunkered machine-gun nests, mortars and artillery, was a murderous waste of expensively trained men.

Yes, that is Steve Jobs on a motorcycle.

Also be sure to check out the other great computer article from this issue: “The Chip”

SILICON VALLEY appears on no map, but this former California prune patch, an hour’s drive south of San Francisco, is the heartland of an electronics revolution that may prove as far-reaching as the industrial revolution of the 19th century.

It is a place where fast fortunes are made, corporate head-hunting is profitable sport, and seven-day workweeks send cutting-edge technology tumbling over itself in its competitive rush to the marketplace.

Not surprisingly, flying—fast, challenging, and risky—is a sport that appeals powerfully to Silicon Valley men such as Bob Noyce, who snatches every chance to fly his twin-engine Turbo Commander to Aspen to ski, to his Intel plant in Phoenix, or just to wheel in the sky around Silicon Valley.