Very interesting article about the industrial designer Egemont Arens, who designed some of the classic consumer goods of the last century (some, like the Kitchen Aid stand mixer, are still available), and his philosophy of design, which sounds remarkably modern. 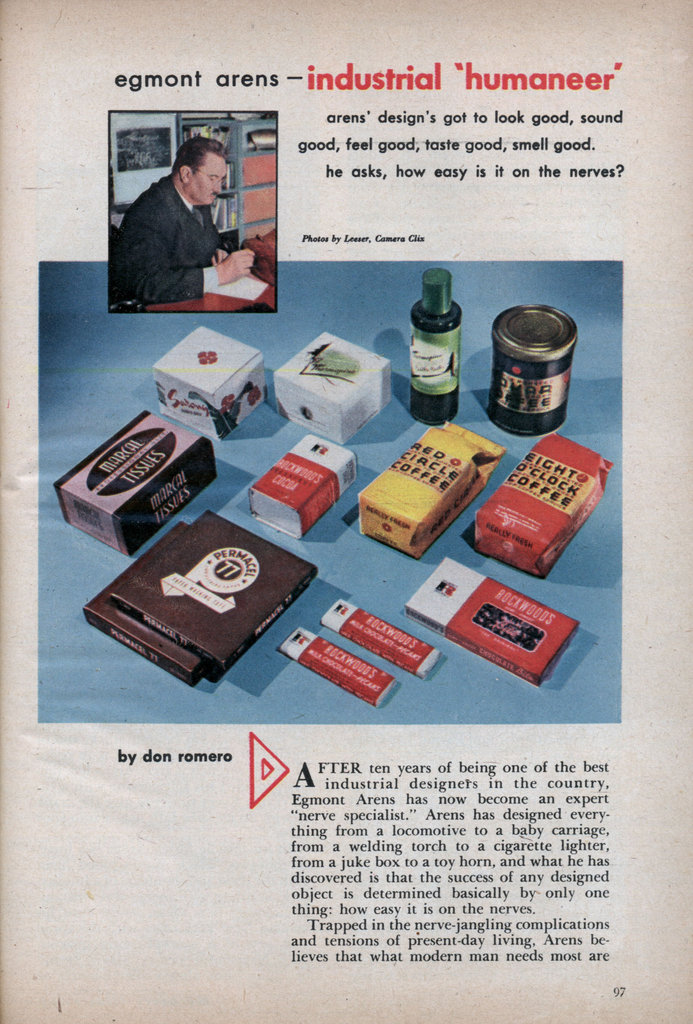 arens’ design’s got to look good, sound good, feel good, taste good, smell good, he asks, how easy is it on the nerves?

AFTER ten years of being one of the best industrial designers in the country, Egmont Arens has now become an expert “nerve specialist.” Arens has designed everything from a locomotive to a baby carriage, from a welding torch to a cigarette lighter, from a juke box to a toy horn, and what he has discovered is that the success of any designed object is determined basically by only one thing: how easy it is on the nerves.

Trapped in the nerve-jangling complications and tensions of present-day living, Arens believes that what modern man needs most are simplicity and relaxation in his surroundings. Instead of designing solely for “sales appeal”, or “esthetic presentation” therefore, Arens concentrates on designing an object to the “specifications” of the human system. He calls it “industrial humaneering.” Arens “humaneers” an object by giving it a color and contour which are relaxing to the eye, by giving it a texture and shape which are pleasing to the touch and inviting to the grasp, by muffling any noises which may jar on the ear, by eliminating any odors which may offend the nose, and lastlyâ€”if the object is, say, a reed musical instrument or a toothbrushâ€”by making sure it is compounded of materials which figuratively, as well as literally, will leave the user with a pleasant taste in his mouth. After making it easy on the nerves, Arens completes his humaneering of the object by making it easy on the muscles. In designing, say, a household-cleaning appliance, he will use every trick in the book to insure that in lifting, carrying, cleaning, operating and storing the appliance, the user will be required to do just as little bending, stooping, squatting, reaching, and wrenching as possible.

The success of Arens’ simple, yet extremely shrewd, approach to the problems of industrial designing is seen in the wide variety of companies who have sought his advice and by the even wider variety of products he has been called upon to design. Arens has worked for such companies as General Electric, Fairchild Aircraft, American Chicle, the Carborundum Company, Dayton Scales, American Car and Foundry, Anheuser-Busch, Coca Cola Company, and the Great Atlantic and Pacific Tea Company. For the latter company alone, Arens has designed every one of the many hundreds of various types of packages which this company has brought out during the last ten years. Among the seemingly endless number of products which Arens has designed are freight cars, fountain pens, outdoor advertising signs, hair-waving machines, shower curtains, motor boats, airplanes, beer cans, coffee grinders, meat slicers, candy, furniture, watches, and secret war weapons.

A typical example of Arens’ humaneering is his recent design of an electric refrigerator. To reduce arm-reaching and the annoyance of sometimes having to half empty a refrigerator in order to get at something which lies far at the rear of a shelf, Arens has equipped his refrigerator with revolving shelves which, with half a spin, will bring anything right to hand. He has also installed over-sized compartments at the sides of the refrigerator for those tall bottles and packages which so irritatingly will not fit into regular-sized shelves. He has also provided a large quick-freezing locker, a built-in faucet which pours ice water and a system by which empty ice trays automatically refill themselves. But best of all is his ice-cube dispenser. To eliminate the exasperating and arm-wearying business of having to wrestle with an ice tray which has become stuck, and of having to chisel and pound it in order to finally wrench it free, Arens has simply provided his refrigerator with a little crank. Every time you give the crank a twirl, an ice cube falls neatly into your glass.

In his middle fifties, Arens is a huge, six-foot-two, black mustachioed man with the chest and shoulders of a lumberjack. Bristling with energy and constantly popping new ideas, Arens runs his go-man New York office with the speed and pep of a sparkplugging quarterback. Never addressed as “Mister Arens” or “boss,” but always affectionately as “E.A.,” Arens keeps his workers constantly hopped up with his own bubbling enthusiasm, will listen as carefully to an idea from his office boy as he will to one from his chief designer, and is noted for his un-bosslike habit of periodically taking the entire office out to lunch or carrying them off to some gay hilarous party for which he foots all the bills.

If other people’s lives have been colorful, then Arens’ has been kaleidoscopic. Arens has been everything from a blacksmith to art editor of Vanity Fair. As the son of a New York symphony orchestra conductor, Arens divided his time as a young man between managing his father’s orchestra and being a Greenwich Village poet. Meeting a number of promising painters and writers, he started what was probably the first art magazine in this country, and published, possibly for the first time, such now-famous artists as Rockwell Kent, George Bellows, and Alexander Brooks. He also started the Washington Square Bookshop. Then tiring suddenly of city life, Arens lit out for the West where he went completely “native” by raising apples and alfalfa, driving a “chuck wagon” for cattle herders, and busting broncos on a horse ranch.

Arens’ most interesting experience occurred, however, when, on only an hour’s notice, he joined three friends in a cruise from New York to England in a 30-foot sailboat. Hardly had they got out of sight of land when the brave little crew found that there wasn’t one among them who had the slightest knowledge of navigation. With the confidence of a hitch-hiker thumbing his way across country, Arens solved the problem by hailing passing ships, asking them which way lay England, and then steering in the direction in which his informers pointed their fingers. Five weeks later he arrived there.

Author of a noted book on “consumer engineering,” and recognized as one of the most authoritative and informative lecturers on the subject of designing, Arens is probably best known for the originality and pioneering quality of his ideas. One of his most valuable innovations in industrial designing is his development of the “pre-sale” test for small-priced items. Instead of sitting around with half a dozen high-priced executives and bitterly arguing over what kind of, say, ketchup bottle is going to win the greatest public acceptance, Arens designs three or four bottles, puts them on sale at a couple of stores, and then lets the public decide which they like best. “An executive may pound the table and shout that one bottle is better than all the rest,” says Arens, “but just let him see that another bottle is selling 20 percent better and he’ll soon change his mind.”

An innovation which Arens is enthusiastically endorsing is the use of food packages with vivid color photographs which picture the contents of the package. “By means of striking, eye-catching pictures of food,” says Arens, “manufacturers are able to set up one of the most irresistible of all human appeals â€” appetite appeal.” Along this line he has helped to perfect a most ingenious method of display. On a package of piecrust flour he has placed a color photograph in which at the right of the picture you see only two-thirds of a pie and at the left of the picture you see only one-third of a pie. Put two of these packages together side by side, however, and you see a whole pieâ€”and put 50 of them side by side on a grocery store shelf and you’ll see a string of 50â€”mouth-watering â€”strung halfway across the store!

While creative originality and a timely sense of style are highly important to a designer, Arens believes that the basic mechanical heart of designing lies in the ability to “organize” the various component parts of an object. “Many inventions, such as the locomotive and airplane,” says Arens, “have slowly developed through a long evolution of added improvements. What happens, however, is that the ‘added improvements’ are often hung on the machine the way added ornaments are sometimes hung on a Christmas treeâ€”as an afterthought. The result is usually a disorganized jumble of wheels, pistons and cogs which stick out all over the place and which give the machine the appearance of an ‘explosion drawing’ in which everything seems to be flying apart. To take a complicated ‘junk pile’ like the steam engine of a decade ago and weld it into the simple, gracefully-lined unity of the modern locomotive is both one of the great challenges and one of the great achievements of industrial designing. Whatever you may beâ€”mechanic, inventor, or engineerâ€”if you create a product which you hope to sell, and want to insure its acceptance by the public, make sure that its various parts are organized into a trim, sleek, streamlined shapeâ€” for in addition to lowering wind-resistance, streamlining also lowers eye-resistance.”

After ten years of styling products for manufacturers, Arens has come to the conclusion that industrial designing consists one-third of turning out a good design and two-thirds of getting an executive to see the value of a design and what it will do for his product. On one occasion Arens was insisting that a food package be colored red and yellow. The executive disagreed on the ground that these colors wouldn’t give his package sufficient eye-appeal. Instead of wasting time in talk, Arens took the executive to the top of the Empire State Building and had him look down into the street. “Now tell me,” said Arens: “What are the most noticable objects down there?” The executive looked and then promptly answered. “The taxicabs, of course.” “Exactly!” replied Arens. “And do you know why? Because they’re red and yellow. Now how about letting me use those colors on your package?” Next time you are in an A&P grocery store, dear reader, take a look at the coffee packages strung along the shelves and you’ll see how Arens is helping this company to sell millions of pounds of coffee every week.