Popular Science
Issue: May, 1941
Posted in: Chemistry
No Comments on INDUSTRY GIVES A LABORATORY TO AMERICA’S YOUNG SCIENTISTS (May, 1941)

INDUSTRY GIVES A LABORATORY TO AMERICA’S YOUNG SCIENTISTS (May, 1941) 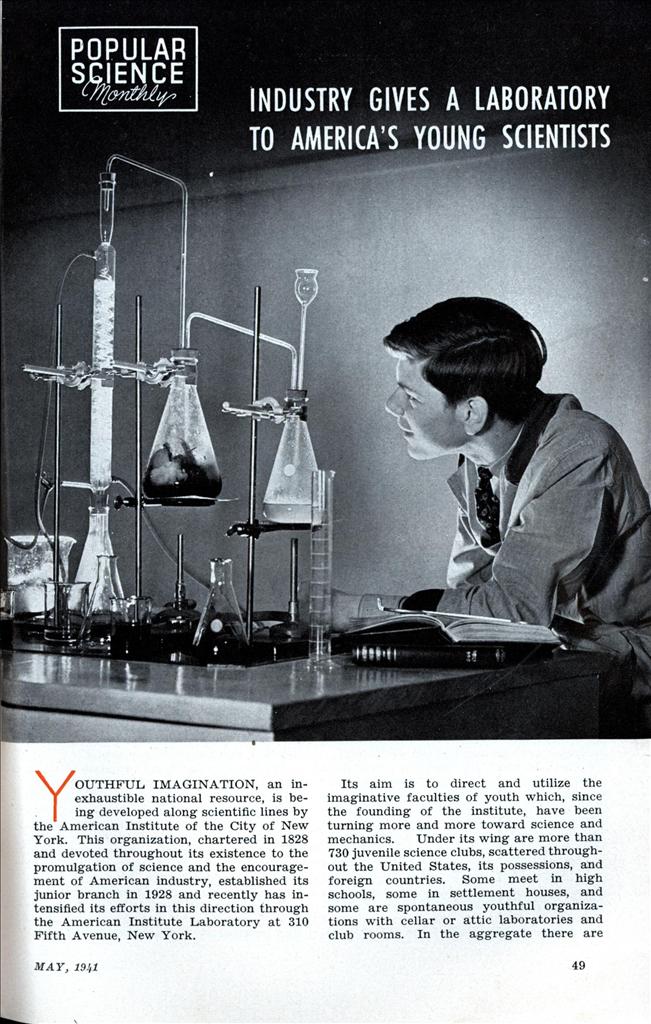 YOUTHFUL, IMAGINATION, an inexhaustible national resource, is being developed along scientific lines by the American Institute of the City of New-York. This organization, chartered in 1828 and devoted throughout its existence to the promulgation of science and the encouragement of American industry, established its junior branch in 1928 and recently has intensified its efforts in this direction through the American Institute Laboratory at 310 Fifth Avenue, New York.

Its aim is to direct and utilize the imaginative faculties of youth which, since the founding of the institute, have been turning more and more toward science and mechanics. Under its wing are more than 730 juvenile science clubs, scattered throughout the United States, its possessions, and foreign countries. Some meet in high schools, some in settlement houses, and some are spontaneous youthful organizations with cellar or attic laboratories and club rooms. In the aggregate there are more than 30,000 youthful club members.

They experiment with model airplanes, bacteria, telescopes, radio, tropical fish, light, sound, animal-breeding, and in numerous other fields. Their ambition is limited only by their own knowledge and the cost of equipment, and it was to obviate the latter difficulty to some degree that the American Institute Laboratory has been established with the cooperation of the International Business Machines Corporation, which gave the use of two floors of a New York City office building, and of the Westinghouse Electric & Manufacturing Company, which supplied the equipment.

Members of the junior activity clubs of the American Institute are eligible to use the laboratory. They are boys and girls from twelve to eighteen years old. Membership in their club, which pays dues of $2 a year to the institute, is the only requirement necessary except the ability of the student and the suitability of his project.

The student desirous of getting working space in the laboratory writes to the institute describing his project, its purpose, the equipment which will be necessary, and the time it will take. Allotments of space are made as it becomes available. The laboratory has projection microscopes, aquaria, a darkroom, drafting and drawing boards and equipment for their use, a wood-working shop with power sanders, lathe, drill presses, and other machinery, and departments fitted for special projects in radio, aviation, and the physics of sound.

There are tables fitted for glass-blowing, and other equipment with which students may manufacture some of the devices which may be necessary for the work they plan to do. A tool kit is issued to each student when he enters the laboratory, and at the end of his work period he replaces it, in condition to be used again immediately should a student in the next shift be engaged in the same kind of work.

There is a reference library, and students have access also to the library of the American Institute at its headquarters at 60 East Forty-second Street. The laboratory also has an advisory board of scientists in various fields who will answer students’ questions and give technical information.

Students are contributing constantly to the equipment of the laboratory. One is engaged in making a blueprinting machine, and another is working on a mimeographing outfit. Another is custodian of one of the stockrooms, working on his own project in his spare time.

Some of the budding scientists have domestic difficulties which interfere to some extent with their careers. One, whose mother is dead, has to leave a little early every day to get home in time to cook supper. So far as is known, supper never has been late, but an experiment he is conducting in hydroponics, to determine how onions thrive under varying conditions, suffered once for lack of sufficient attention.

Another fled to the laboratory as a sanctuary with his white mice. He had been breeding the animals to study the Mendelian characteristics of succeeding generations and about Christmas time last year, when he had reached the twelfth generation in his tests, his mother rebelled. Enough was enough, she said, and twelve generations of mice were altogether too many mice. She was exceedingly firm about it, too, and the young scientist had to lead an immediate exodus of his highly bred subjects. He found a temporary home for them with a neighbor until he gained admission to the laboratory. There the mice are housed in a cage built for just such experiments by one of the junior activity clubs of the institute in Maiden, Mass.

The clubs all over the country are engaged in just such work as is going on at the laboratory, though generally without the equipment that is available there. The institute plans to establish other communal laboratories in centers where they may be used by several clubs. As far as possible, projects are undertaken at the New York laboratory with a view to helping clubs at a distance. Cultures, for instance, are being grown there in large quantities so that they may be sent to outlying clubs.

The American Institute has a Science Fair every year in the Education Hall at the American Museum of Natural History in New York, at which members of the affiliated clubs exhibit their handiwork. The institute sends its own technicians to aid in setting up the more elaborate exhibits. Leading scientists and educators are among the judges at the fair. Last year on the opening day the attendance was 7,222.

Airplane models naturally are among the more popular projects of club members, and Richard Walton, a youthful aeronautical engineer who won a prize at the Pittsburgh Science Fair, designed and manufactured a wind tunnel with which to test the model craft. Alan Goodman designed a seaplane bomber which carried torpedoes in its pontoons, reducing air resistance. It carried machine guns in the wings and a cannon on each side of the propeller.

Wallace Cloud, fourteen years old, a student at the Grover Cleveland High School, is working at the institute’s Fifth Avenue laboratory on the distillation of household refuse. His experiments might put a high value on the garbage pail, as they indicate the possibility of extracting chemicals valuable both in medicine and for explosives.

Judges at the Science Fair have at their disposal $3,000 in prizes to be awarded for conspicuously good work. The Veterans’ Wireless Operators’ Association offers the Marconi Memorial Award Scholarship to institute members.

With the establishment of its laboratory in New York for boys and girls with a scientific bent, the American Institute feels that it has taken a long step forward in the program it undertook at the completion of its first hundred years for the training and development of the imagination of America’s youth. When other such laboratories have been established, the youth organization of the institute will become a close-knit national training school.