Inside Our First Two-Man Spacecraft (Feb, 1965) 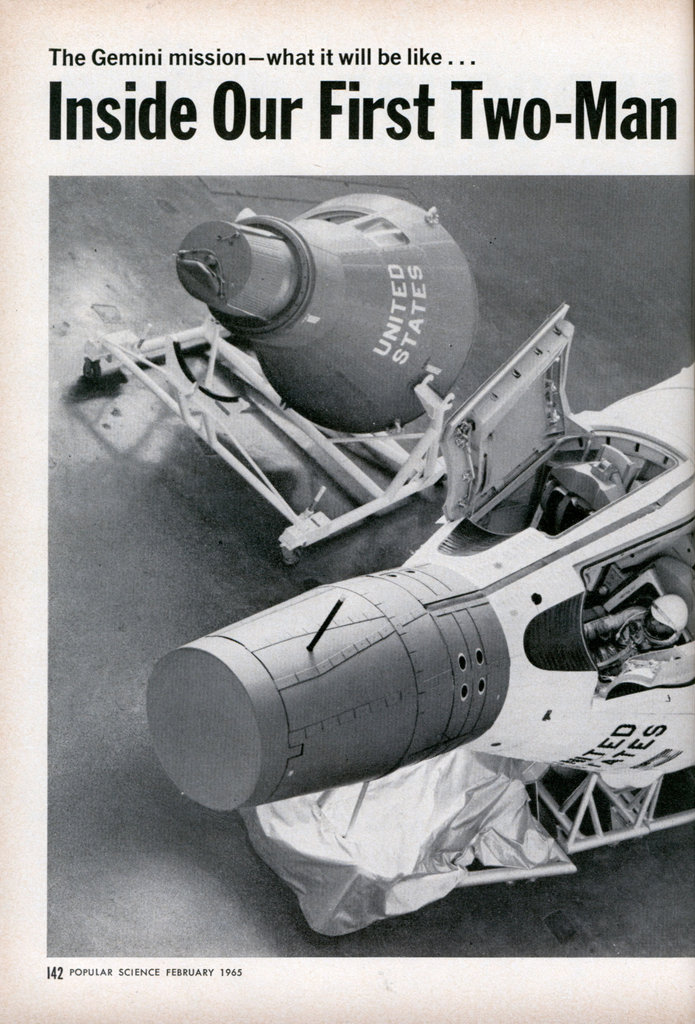 Inside Our First Two-Man Spacecraft

Not just a scaled-up Mercury capsule, the Gemini spacecraft is a ship for astronauts to fly

WITHIN the next few months, for the first time in our space program, two U.S. astronauts are expected to go into orbit together.

Their vehicle, the Gemini spacecraft, is far more than just a Mercury built for two. Besides being half again as roomy and twice as heavy as Mercury was, it is much more complex and efficient. That is because it will have many intricate tasks to perform before it completes its 12 scheduled missions.

Those missions will include flights lasting as long as two weeks. They will include practice rendezvous with another spacecraft in orbit (an Agena D rocket will play the supporting role). After rendezvous, Gemini will try space-docking, by sliding its nose into a socket in one end of the Agena D. In addition, Gemini’s two astronauts will depressurize their cabin, open its hinged hatches, and take turns floating about on tethers, as future astronauts must be able to do if they are to make repairs en route or build space stations in orbit.

All these demanding and perilous maneuvers must be tried out and perfected before the first manned journey to the moon can be undertaken with confidence.

Gemini’s first flight. The more dramatic events will not take place on the first flight. It will be simply a three-orbit journey, lasting about four hours and a half. But in that brief time, Astronauts Virgil I. (Gus) Grissom and John W. Young will use as much as possible of the complicated equipment.

Mercury, in which all essential systems shared the cabin with its sole occupant, was as uncomfortable as a crowded broom closet. On Gemini, everything that can be put out of the astronauts’ way has been stowed elsewhere. This was achieved partly by packaging the systems, partly by housing them in the outer section of a doubly constructed reentry module, and partly by locating them in the adapter section, at the base of the spacecraft.

The crew’s pressurized cabin forms the core of the re-entry module. The space between it and the outer shell is filled with instrument packages, electronics gear, and landing gear. This arrangement provides greater protection from micrometeorite damage, as well as greater comfort, than Mercury afforded. Ret-rorockets, fuel for positioning thrusters, batteries, and the main oxygen supply occupy the adapter section, shed before Gemini returns to the earth’s atmosphere.

Mercury’s capsule was launched with an escape tower attached, which would have rocketed the entire module out of harm’s way if the launching rocket had misfired. Gemini provides its pilot-commander with gauges that tell him precisely how its Titan II booster is behaving. If he reads trouble on the dials, he’ll pull a ring beside one knee and catapult both himself and his copilot out of the module in rocket-fired ejection seats. There’s a ring at each seat, and pulling either one ejects both seats. This could be done, if necessary, during re-entry as well as during launch.

Mercury had a small reaction-control system that let its astronaut change the attitude of his craft in space, but not its orbit.

Gemini will be able to move forward and backward in any direction, up and down, and sideways. Thrust for these moves will come from a range of impulses, provided by a hypergolic mix of monomethyl hydrazine and nitrogen tetroxide.

Despite its maneuverability, piloting Gemini will not be much like driving a car. When it changes speed, it also changes the shape of its orbit, and thus its altitude.

Whereas Mercury could be under completely automatic control, either from the ground or from on-board gyros, Gemini is almost entirely under control of the men aboard. It cannot be commanded from the ground. The pilotâ€”or, if he’s incapacitated, the copilotâ€”must initiate an emergency exit, if needed, and also must trigger the re-entry system.

Docking. Gemini has a radar, with a 250-mile range; an inertial-guidance platform; and a manual-feed electronic computer, weighing only 57.6 pounds and taking up one cubic foot. Mercury had none of these, and had no need for them. They are essential, however, to Gemini’s forthcoming tasks of meeting another spacecraft in orbit and docking with it. This delicate and difficult job of closing on another vehicle in space when both are going 18,000 m.p.h, can be done automatically if the Gemini pilot chooses, or semiautomatically, or under the pilot’s own control.

He needs to know the speed, distance, and direction that will take him to his target. Once the Gemini spacecraft is within 250 miles of the Agena D, its inertial-guidance platform and computer can get this essential information from the radar and guide the craft toward its target without help from the pilot. But if he prefers, the computer will provide him with a readout of the necessary data and he can act on it himself. In the last few feet before docking, the pilot will probably rely wholly on his own vision, judgment, and manual control.

Docking will involve a speed differential of only about 1-1/2 m.p.h, between the vehicles. That seems tiny, but as someone remarked, “If you walked into a door at 1-1/2 m.p.h., you would feel quite a bump.”

Gemini’s remarkable little computer is rather like a superintelligent third crew member. By feeding the variables into it on a small keyboard, the pilot not only can get instant information vital to maneuvering in space, the computer will also tell him precisely where he’ll land whenever he’s ready to start the homeward plunge from orbit to ocean.

Gemini had been expected to improve on Mercury in two important ways that have not yet proved to be feasible. One was the means of obtaining electric power. The other was the method of landing.

No fuel cellsâ€”yet. Program planners had hoped to provide the Gemini spacecraft with electricity produced directly by mixing hydrogen and oxygen in fuel cells. The fuel cells would weigh far less than the old, reliable silver-zinc batteries used in the Mercury program. Furthermore, they would produce drinking water as a precious byproduct of their chemical reaction.

The fuel cells work, but they are not yet considered sufficiently dependable for a manned spacecraft. They’ll be tried out for a while longer on the ground.

Until then, the heavier silver-zinc batteries will supply manned Gemini missions with electricity. Drinking water for the astronauts will be taken aboard the capsule before launch.

Gemini’s sponsors had also intended that the re-entry module should be able to make dry landings, with considerable precision, instead of dropping by parachute into the sea, as all the Mercury capsules did.

Dry landings were to have been made by inflating a “paraglider” at around 42,000 feet above the ground and sailing down to a safe and reasonably soft touchdown wherever the spacecraft commander chose.

The paraglider had seemed to be shaping up fine for its intended role in test flights at Edwards Air Force Base. NASA research pilots had successfully flown a smaller version of it, on a kind of aerial tricycle, to precision landings a good many times. But when the paraglider was tried out on a boiler-plate copy of the Gemini re-entry module, under control of another pilot, it immediately went into a left turn after being drop-launched at 13,000 feet, and the pilot couldn’t bring his bell-shaped craft out of the turn. He bailed out at 2,000 feet, and the boilerplate hit the ground at 50 feet a second.

Ocean landings. Development work on the paraglider landing device for spacecraft will continue, but all Gemini landings will be blue-water splashes, in the Mercury tradition. The only difference: The bigger, heavier Gemini vehicle will use an 84-foot parachute instead of Mercury’s 60-footer.

Unlike the Russians, we have not yet found a satisfactory way to land a spacecraft by parachute anywhere but in the sea. Our spacecraft are not maneuverable when dangling from a chute, and thus are unable to dodge possible ground hazards, such as trees, rocks, or gullies. Furthermore, even in a perfectly clear area, the shock of landing the craft on ground would be too severe to risk.

Other troubles have also afflicted the Gemini program. In December, failure in a hydraulic line caused an automatic shutdown of both Titan II engines, aborting a 2,150-mile test launch down range, and setting the program back an estimated month.

Seldom mentioned, but surely in most people’s thoughts at the time an astronaut is circling the earth, is the unavoidable question of toilet habits. What does he do?

Well, though it means temporarily de-pressurizing his suit and relying on cabin pressure alone to keep him alive, an astronaut can unzip as far as he needs to. Waste disposal on spacecraft is still rather crude, but adequate. Solid waste is retained in plastic bags. The bags are sealed and tucked away in cubicles for eventual disposal on earth. For liquid waste, each Mercury astronaut used a pressure-suit bladder. Gemini’s two-man crews will use a relief tube containing a tiny pumping device that guarantees flow to an 800-cc. reservoir. The tank is only temporary, however. When the user of the relief tube removes the cone at the top, a valve closes, and the reservoir’s

contents are dumped overboard, perhaps flung into perpetual orbit in the form of frozen particles.

For the far longer space missions of the distant future, NASA anticipates being able to process crew waste on board and utilize the purified moisture from it for washing and drinking water.