Popular Mechanics
Issue: Jun, 1935
Posted in: Other Animals
No Comments on INSIDE STORY of the RODEOS (Jun, 1935) 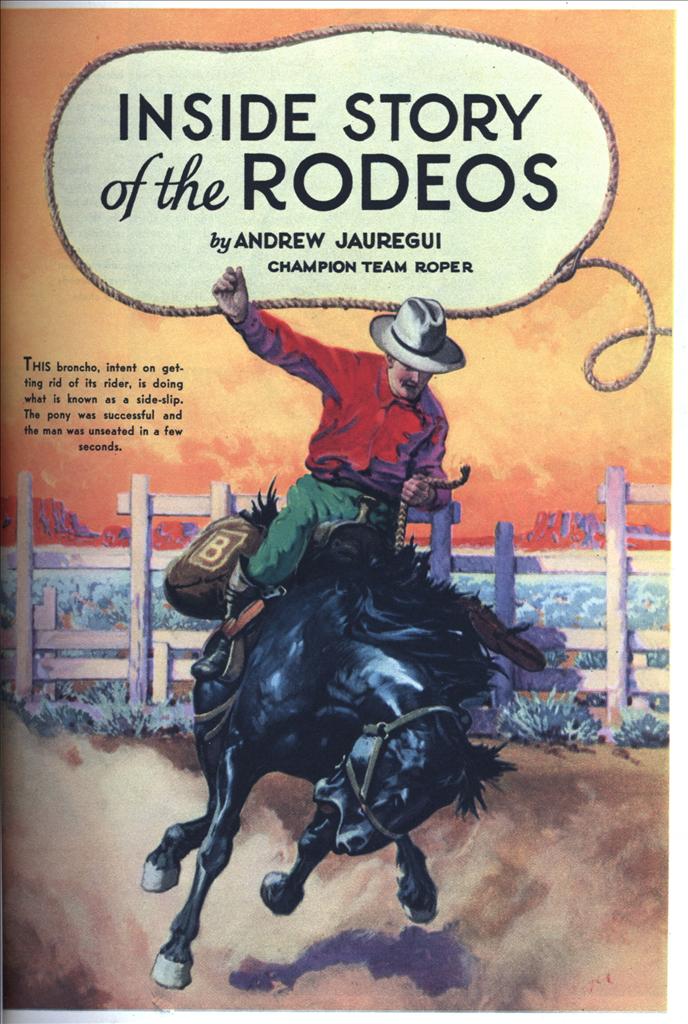 INSIDE STORY of the RODEOS

FOR thirteen years I have been doing “setting-up” exercises â€”attempting, more or less successfully, to remain in leather on a plunging broncho or Brahma steer or to rope and tie elusive, wriggling bundles of calf meat. I am a rodeo performer and, with other cowboys, move from rodeo to rodeo each season, risking sound bones and excellent health for the roar of the crowds and the reward of gold.

Everywhere we hear these three questions: Isn’t it dangerous to ride wild horses ? How do you stay in the saddle ? What are the tricks of rodeo riding?

There is danger and, of course, there are tricks. Some have learned the fine points that enable them to ride to a championship in at least one division. Most of us specialize in one subject. Mine is roping. Some choose to ride bare-back on Brahma steers, others prefer bucking bronchos, minus bridle, or wild horses, without benefit of saddle or bridle. We take every precaution, but danger from the unforeseen stalks us always.

Although we use strong saddles with fourteen-inch swells directly in front of the legs to help us hang on during the plunging, these are of little help under some circumstances, such as fighting a horse in the chute. When I ride this kind, I slip into the saddle quickly and draw the bucking rein, a heavy rope leading to one side of the halter, back short. This pulls the pony’s chin in close to his chest and keeps him from rearing up. .

There’s a very smart trick in riding these untamed animalsâ€”swaying with the horse while keeping balance by leaning back against the rope. Oddly, the worst buckers are bronchos of several years’ rodeo experience.

No matter how mean the horse or how tough the going, we must observe a few rules to the very letter. We must wave one hand in the airâ€”to touch leather with this one is to be disqualified. We must continue scratching with our spurs. Our only safety lies in keeping a steady and tight hand on the bucking rein, keeping our balance in the saddle if possible, or pulling ourselves back as we start to fly through space. For ten long seconds during what seem like a thousand bucks skyward and back again, we must stay aboard these heaving mountains, then slide out of the saddle as best we can. Some bronchos continue bucking after the final gun barks, while others heed the signals and calm down. Since we draw mounts by lot shortly before each event, unless we get a broncho we know by rep- utation, we must be prepared for anything!

But riding a wild horse! There’s excitement. Imagine straddling a bundle of mixed thunder and lightning bareback, with no bridle, and hanging onto a rope passed around its middle as it plunges, bucks, races, storms and kicks. Thanks to the Rodeo Association of America, the organization that rules these events, we don’t have to change our spurring position on the barebacks. So every rider who is wise sets his feet out ahead and scratches along the shoulders and doesn’t change that position. Meantime, he must keep a hand free to wave his sombrero, he must not change hands on the loose rope and he must maintain a pleased expression for the benefit of the customers.

Dangerous as are the wild bronchos, riding them is less hazardous than boarding, riding and departing from the rolling back of a cantankerous Brahma. They are a cross between India’s sacred cow and the Texas Longhorn. Their flesh rolls, their horns are sharp and they take keen delight in goring a rider once he is thrown. They give more action and are smarter in some respects than the bronchos. Although they look smaller, they are really heavier than horses. And they’re quick as the wind. Tex Palmer was tossed from a Brahma at Oxnard, Calif. Hardly had he hit the ground before the steer attacked. When the battle ceased, the Brahma had shoved Palmer all around the arena, leaving him bruised and, of all things, with two black eyes.

The only protection the boys have is provided by tipping the horns on the worst animals with round, brass knobs. These may cause considerable pain, but they’re not apt to plunge through the body.

I like roping for real scientific precision and action. In team roping, we work in pairs, one rider taking the head, the other the heels. Each of us sits beside the chute, until the steer crosses the “dead line,” thirty feet distant. Then we give chase on horses trained to follow the animal.

If I’m playing head man, I toss the first rope. As the loop settles over the steer’s head, my horse comes to a dead stop. Quick as a flash, the heeler ropes the steer by the heels, then we move in opposite directions and force him to fall. Then I dismount and tie his heels with a three -foot pigging string, one end tucked in my belt and the other in my mouth.

All we need for roping is a good horse, a sturdy roping saddle and a twenty-five-foot length of seven-sixteenths-inch Manila rope. The pony must be sturdy, very fast and schooled not only to stop from a gallop on a dime, but to back up and keep the rope taut while you tie up the steer. The roping saddle has a low cantle board, which enables the roper to get off quickly and which will stand hard jerks of the lasso which is tied to the pommel.

Bull-dogging has lost favor in some states, while roping has gained. In bull-dogging, the rider leaps from the saddle at a gallop, falls on the steer’s head and twists him down by pulling the nose into the air as the cowboy walks backward. Some consider this a cruel practice. In its place, “decorating” is practiced. This is the same, except that the “decorator” slips an elastic band over the animal’s nose.

The stars of the rodeo game must keep in fit condition the year round. They train as faithfully as any other athletes, for theirs is a hard lot, and some may appear in thirty rodeos in a year.