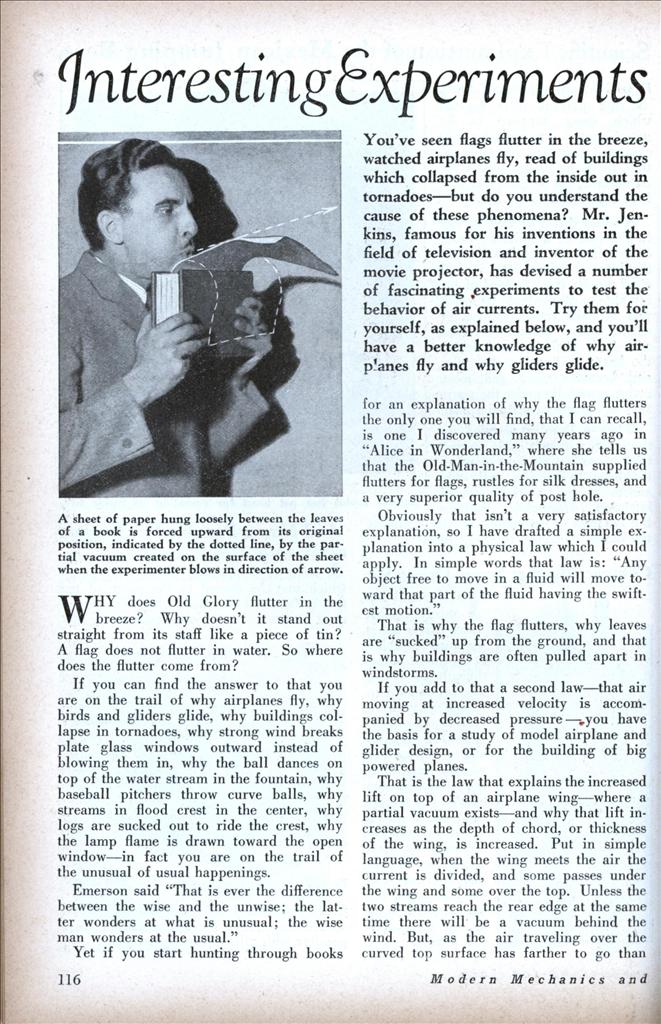 You’ve seen flags flutter in the breeze, watched airplanes fly, read of buildings which collapsed from the inside out in tornadoes—but do you understand the cause of these phenomena? Mr. Jenkins, famous for his inventions in the field of television and inventor of the movie projector, has devised a number of fascinating experiments to test the behavior of air currents. Try them for yourself, as explained below, and you’ll have a better knowledge of why airplanes fly and why gliders glide.

WHY does Old Glory flutter in the breeze ? Why doesn’t it stand out straight from its staff like a piece of tin? A flag does not flutter in water. So where does the flutter come from?

If you can find the answer to that you are on the trail of why airplanes fly, why birds and gliders glide, why buildings collapse in tornadoes, why strong wind breaks plate glass windows outward instead of blowing them in, why the ball dances on top of the water stream in the fountain, why baseball pitchers throw curve balls, why streams in flood crest in the center, why logs are sucked out to ride the crest, why the lamp flame is drawn toward the open window—in fact you are on the trail of the unusual of usual happenings.

Emerson said “That is ever the difference between the wise and the unwise; the latter wonders at what is unusual; the wise man wonders at the usual.”

Yet if you start hunting through books for an explanation of why the flag flutters the only one you will find, that I can recall, is one I discovered many years ago in “Alice in Wonderland,” where she tells us that the Old-Man-in-the-Mountain supplied flutters for flags, rustles for silk dresses, and a very superior quality of post hole.

Obviously that isn’t a very satisfactory explanation, so I have drafted a simple explanation into a physical law which I could apply. In simple words that law is: “Any object free to move in a fluid will move toward that part of the fluid having the swiftest motion.”

That is why the flag flutters, why leaves are “sucked” up from the ground, and that is why buildings are often pulled apart in windstorms.

If you add to that a second law—that air moving at increased velocity is accompanied by decreased pressure— you have the basis for a study of model airplane and glider design, or for the building of big powered planes.

That is the law that explains the increased lift on top of an airplane wing—where a partial vacuum exists—and why that lift increases as the depth of chord, or thickness of the wing, is increased. Put in simple language, when the wing meets the air the current is divided, and some passes under the wing and some over the top. Unless the two streams reach the rear edge at the same time there will be a vacuum behind the wind. But, as the air traveling over the curved top surface has farther to go than the air under the wing, which has a flat bottom surface, the only way it can get to rear on time is to speed up.

If you want a very simple demonstration of the lift of air at high velocity passing over the top curved surface of an airplane wing, hold a sheet of letter paper by two corners before your lips and blow over the top side, which has dropped down to your chest. As you blow the air stream, at increased velocity and decreased pressure, follows down the curved surface of the paper, creates a partial vacuum, and the normal air pressure beneath the paper lifts the sheet upward. You can get an even more pronounced curve in the paper by clamping the end between two books or magazines, and, by blowing hard enough, lift the free end from a vertical to a horizontal position. There are innumerable little tricks with paper that teach the basic facts about moving air currents, their effect on free moving objects, and all have some bearing on flying, and, in particular, gliding and soaring flight.

Take a sheet of letter paper, put a crease across it about four inches from one end, pull the shorter portion over the edge of a desk or table to give it a curve, as shown in the drawings. Lay the sheet on the table, with curved portion away from you, place the fingers on the nearer end, the lips close to the surface, and blow. The air stream, deflected upward and around the curved portion, decreases the pressure there and the air underneath the curve, pressing upward in an effort to get into this swift moving stream, raises the curved paper upward and bends it toward you.

Now take another sheet and crease it down the sides, leaving a space of about 2-1/2 inches between the creases, and draw both sides over the table edge to curve them, as shown in the accompanying photograph. Lay this on the table, blow down the center, and the two sides are forced in toward the central air stream.

Next put the curve in the center of a sheet, as shown. When you hold the nearer end and blow, the air stream, following around the curved surface, to which, because of its decreased pressure, it is held by the outer air pressure, creates a partial vacuum, and the air underneath the curve, trying to get into this fast moving stream, raises the curve and pulls the farther end toward you. But if you put a finger on the opposite end to keep it from moving nothing will happen. Light a short piece of candle and place it beyond this far end, hold the paper down with your finger, and when you blow over the paper you can blow out the candle. But release the farther end, light the candle again, and when you blow, the air stream, instead of reaching the candle, will curve around the paper and come back with it toward you. And the candle flame, you will see, will be drawn toward you, for the air around it is also being drawn into the moving stream.

Nothing illustrates that habit of moving fluids sticking to curved surfaces so well as a little demonstration with a candle, a small rubber, paper or metal tube, and some round object, such as a water glass. Light the candle and place it close to the glass. Hold the end of the tube against the opposite side of the glass and blow. The air stream follows the glass, because at its increased velocity its pressure is less than that of the outer air. And, following around the glass, it blows out the candle on the opposite side. You can get the same effect with a much larger circular object, such as a water pail, or one of those fiber waste-baskets.

Place some half dozen lighted candles in a semi-circle around a water tumbler, with the candles about two or three inches away from the glass. Now, with your tube, blow around the surface of the glass, and watch all the candle flames being “sucked” toward the air stream.

Or put your candle on top of a small box or a pile of books, and blow at the base of the support. The air stream is deflected up the vertical side, the surrounding air is drawn into it, and with the air the candle flame is drawn toward the moving stream.

Another stunt with water glasses and candles is to place three or four glasses in a row, with candles between them and beyond the last glass. If your spacing is proper, the air stream blown on the first glass will go half way around it, put out the candle, pass in the opposite direction half way around the second, put out the candle, and continue on until all four lights are extinguished. In each case at least part of the air stream has reversed its direction of curve in order to continue around the next glass.

Have you ever watched a bird hover on motionless wings, and suddenly, without a single flap, shoot upward in the air? Or read about a motorless glider in Germany climbing more than a mile high on rising air currents, remaining in the air more than fourteen hours, or traveling more than fifty miles across country?

Gliders do marvelous things, but they don’t begin to compare to even the average good gliding birds, such as the gull, the hawk, or the eagle.

These simple experiments with paper and candles were designed to show why airplane, glider and bird wings have a lifting effect in moving air. Here are some of a different type that carry the lesson a bit further.

If you can get one of those light celluloid ping-pong balls, an inch and a half in diameter, you can make it float in the air. All you need is a tube—rubber, metal, or rolled up paper. Hold the ball loosely above the end of the tube and start blowing. As long as your breath holds out the ball will ride on top of the current. Its distance above the tube end will be the point at which the force of gravity trying to pull it down exactly balances the lifting effect on the ball. Now place the ball against the wall and blow against it.

“You can hold the ball against the wall with nothing but an air stream to support it, and if you move the end of the tube the ball will follow around over the wall, always remaining in the center of the air stream.

In the first experiment you might suppose that the pressure of the air stream was supporting the ball, and in the second that the pressure was keeping the ball against the wall. But that doesn’t explain why it should move around to follow the movement of the tube. So the only possible explanation is that the high velocity air stream curving around the surface of the ball has decreased the pressure there, and the outer air, at higher pressure, is being drawn in from all sides.

If you have a vacuum cleaner in your home here is one stunt of my own invention that’s still more remarkable. Remove the dust bag from the vacuum cleaner and place a cardboard mailing tube over the blower outlet. Set the machine so that the tube points upward at a 45-degree angle. With the power of the electric blower you can use a much heavier ball, such as tennis balls.

Start the motor and release the ball in the air stream. It will rise along the stream, just as a bird or a glider rises, until it reaches the point where the force of gravity neutralizes the lifting effect. But, when it reaches that point, instead of falling to the floor it will remain suspended in the air.