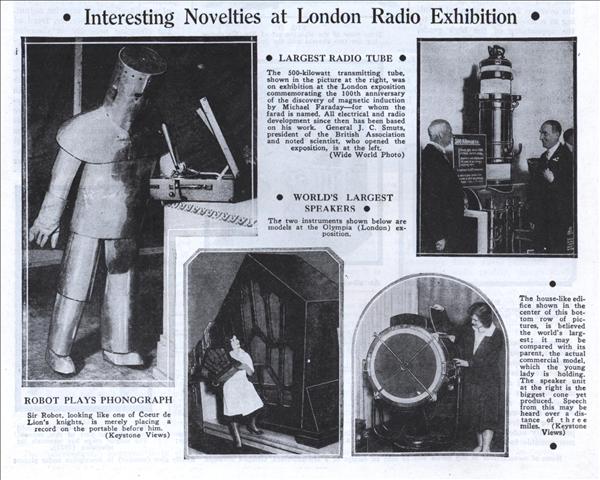 ROBOT PLAYS PHONOGRAPH
Sir Robot, looking like one of Coeur de Lion’s knights, is merely placing a record on the portable before him.
(Keystone Views)

• LARGEST RADIO TUBE •
The 500-kilowatt transmitting tube, shown in the picture at the right, was on exhibition at the London exposition commemorating the 100th anniversary of the discovery of magnetic induction by Michael Faraday—for whom the farad is named. All electrical and radio development since then has been based on his work. General J. C. Smuts, president of the British Association and noted scientist, who opened the exposition, is at the left.
(Wide World Photo)

• WORLD’S LARGEST SPEAKERS •
The two instruments shown below are models at the Olympia (London) exposition.

The house-like edifice shown in the center of this bottom row of pictures, is believed the world’s largest ; it may be compared with its parent, the actual commercial model, which the young lady is holding. The speaker unit at the right is the biggest cone yet produced. Speech from this may be heard over a distance of three miles. # (Keystone Views)