Posted in: From the Archives
11 Comments on Invented Earlier than You’d Think – Pt. 3 – Television

RADIO Movies in Color (Nov, 1929)
This one was another surprise, apparently Bell Laboratories had a working color television in 1929. It’s pretty damn impressive that someone managed to make an electro-mechanical color television. It sort of reminds me of a reverse version of a DLP chip. 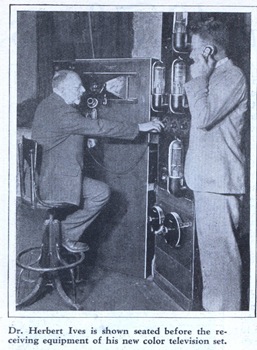 Pay Per View TV (Oct, 1947)
This is the earliest example I’ve seen of Pay Per View TV. The picture would come in blurred from the station and the receiver would get the decoding frequencies over your phone line and the charge would appear on your phone bill.

Color VCR and Flat Screen Television (Sep, 1954)
This article from Colliers magazine has a bunch of stuff that was really ahead of it’s time, but the two best are this picture on the left of the playback from a color VCR and this amazingly modern looking flat screen television on the right. Seriously, doesn’t that look like a 23″ LCD? 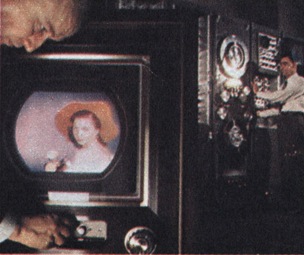 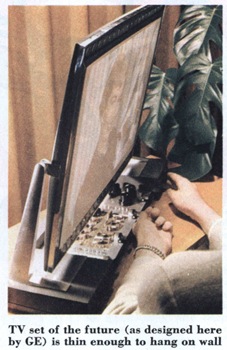 Flat Screen TV in 1958 (Jan, 1958)
While the flat-screen above looks pretty amazing, the article was a little short on the details of how it worked or if it actually worked at all. The one below is the real deal, check out the article and the linked 1996 interview with the inventor, William Ross Aiken. 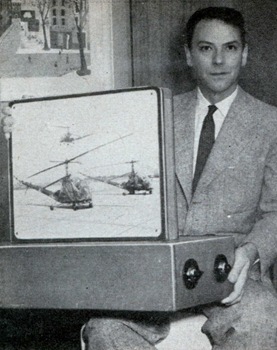 Recorder stores TV stills (Jan, 1964)
Well, it’s not exactly pausing live television with aÂ  Tivo, but this nifty device from 1964 could record up to 10 still frame grabs on a big metal foil disc spinning at 3,000 RPM. 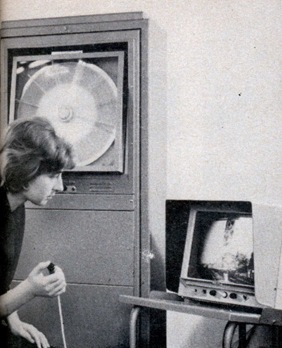