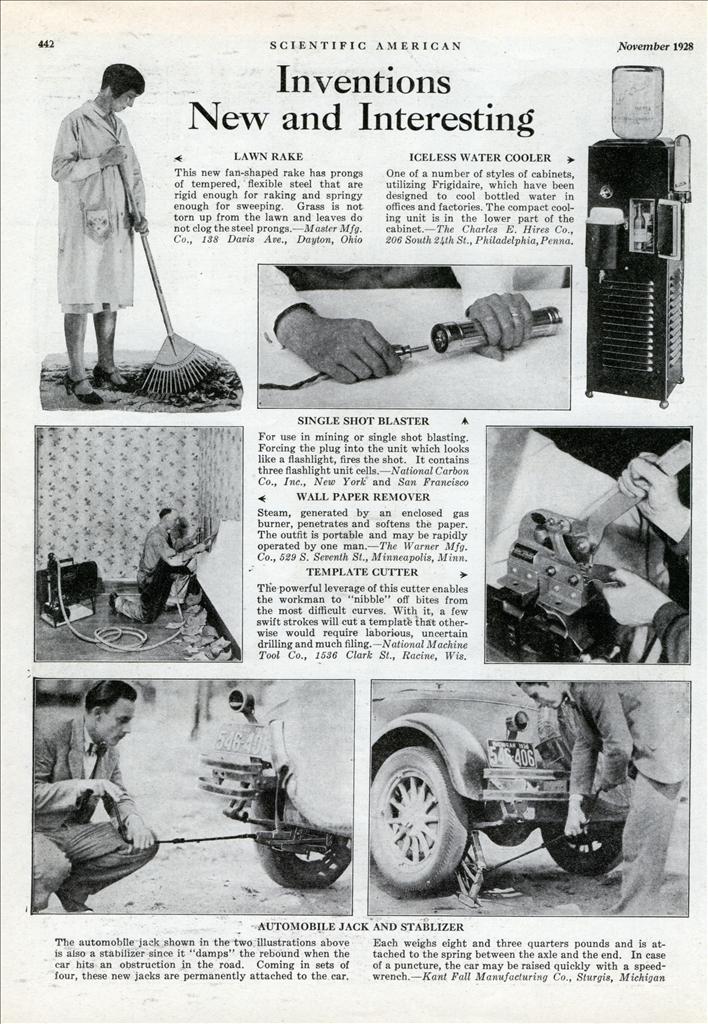 LAWN RAKE
This new fan-shaped rake has prongs of tempered, flexible steel that are rigid enough for raking and springy enough for sweeping. Grass is not torn up from the lawn and leaves do not clog the steel prongs.—Master Mfg. Co., 138 Davis Ave., Dayton, Ohio.

ICELESS WATER COOLER
One of a number of styles of cabinets, utilizing Frigidaire, which have been designed to cool bottled water in offices and factories. The compact cooling unit is in the lower part of the cabinet.—The Charles E. Hires Co., 206 South 2kih St., Philadelphia, Penna.

SINGLE SHOT BLASTER
For use in mining or single shot blasting. Forcing the plug into the unit which looks like a flashlight, fires the shot. It contains three flashlight unit cells.—National Carbon Co., Inc., New York and San Francisco.

WALL PAPER REMOVER
Steam, generated by an enclosed gas burner, penetrates and softens the paper. The outfit is portable and may be rapidly operated by one man.—The Warner Mfg. Co., 529 S. Seventh St., Minneapolis, Minn.

TEMPLATE GUTTER
The powerful leverage of this cutter enables the workman to “nibble” off bites from the most difficult curves. With it, a few swift strokes will cut a template that otherwise would require laborious, uncertain drilling and much filing.— National Machine Tool Co., 1536 Clark St., Racine, Wis.

AUTOMOBILE JACK AND STABLIZER
The automobile jack shown in the two illustrations above is also a stabilizer since it “damps” the rebound when the car hits an obstruction in the road. Coming in sets of four, these new jacks are permanently attached to the car.

Each weighs eight and three quarters pounds and is attached to the spring between the axle and the end. In case of a puncture, the car may be raised quickly with a speed-wrench.—Kant Fall Manufacturing Co., Sturgis, Michigan

REFLECTOR TAIL LIGHT
The light from an approaching automobile warns its occupant when, on striking this device, it is reflected strongly. It uses no light of its own, but works on the simple principle of internal refraction.—Catseye Reflecting Devices, Inc., Philadelphia, Pa.

ASH RECEIVER
With this unique device, the regular ash can used by homes and large buildings, is placed on the elevator and lowered by a hand crank into the pit under the heater. The ashes are deposited by gravity in the can, ready for removal.—The Ash Uplifter Co., Miller Building, Scranton, Penna.

FOUR-COLOR MAGAZINE PENCIL
Pencil leads of four different colors, any one of which is ready for instant use, make this pencil valuable for checking work. The two ends telescope together. In order to write, the two parts are drawn apart slightly and turned until the proper color shows. When pushed together again, that color lead projects.—Educational Exhibition Company, Providence, R.I.

BREAKFAST SERVICE
This three-tier tray facilitates the serving of light meals in the room of a club or hotel guest. The shelves, held together by a handle, hold food and all the dishes necessary. Its white cover also serves as a small table cloth.— Servidor Company, 101 Park Ave., New York

WIND INDICATORS
The direction and velocity of wind foretells the weather. Above is shown the indicator which is installed far below the roof on which the instruments at the right are installed. The vane swings with the wind and a light flashes behind the proper letter on the indicator dial. In the center of the dial is a light which flashes the number of times a minute to correspond to the miles-per-hour wind speed shown by the anemometer.—Charles E. Lord, 24 Milk St., Boston, Mass

FINGER LAMP
Many uses will be found for this convenient lamp which gives light where it is most needed but leaves both hands free.—Digit Mfg. Company, 272 Lafayette St., New York