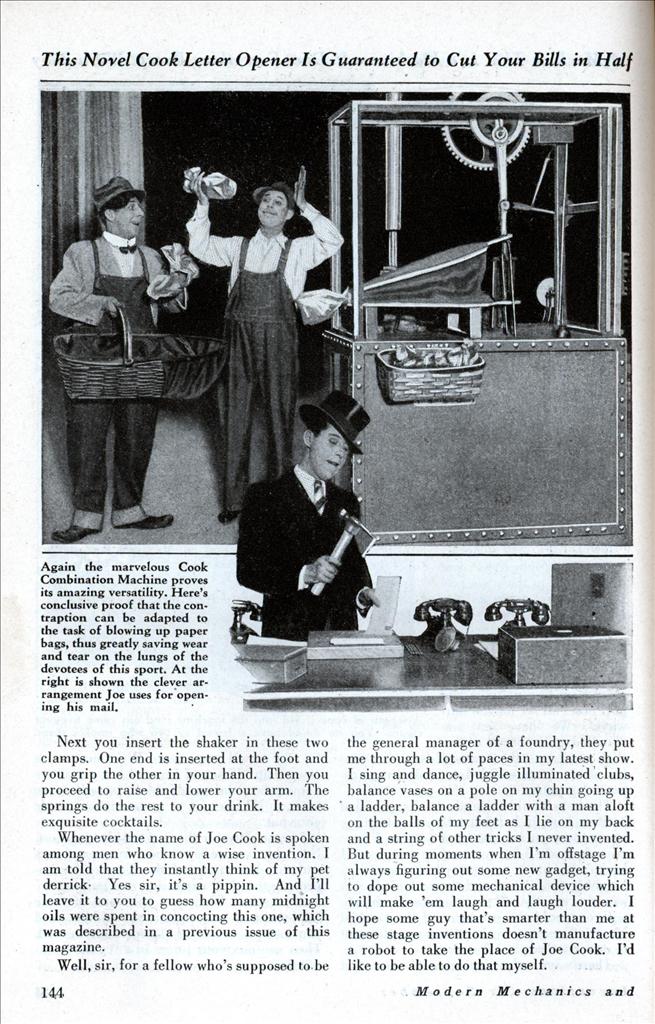 INVENTIONS of the Musical Comedy Edison

Long known as the “One Man Vaudeville Show,” Joe Cook, star of the musical comedy stage and screen, has given further proof of his inventive ability in his latest success —”Fine and Dandy.” Here he tells you of his nutty inventions which brighten the show.

by JOE COOK As told to Bennett Lincoln

WELL, sir, the days when a song and dance routine with a few gags strewn in between denoted that you were a comedian on the American stage have vanished.

You’ve now got to show the customers out yonder that you’re a smart guy. The way I get around that is to slam-bang them with a load of cuckoo and complicated inventions. First they are baffling but then you soon realize that it’s all in fun, as my partner, Dave Chasen, would say.

In this year of grace, and disgrace, for that matter, people don’t storm the box-office just to hear some charlatan wise-crack for a couple of hours, trying to make the succumbed audience forget the financial embarrassment they might begin to feel. I’m not a blackface comic, and I never bended my knee to sing a mammy song. I don’t wear a mask. I’m there behind the footlights, as advertised, Joe Cook in person.

The way I feel about it is that a blown-in-the-bottle 100 proof comedian today has got to be something more. In my case I feel that I’m an inventor. At heart, I’m a thoroughbred mechanic.

Why, let me tell you, sir, down in the neighborhood of Lake Hopatcong, New Jersey, I have a summer home and behind it I have a big barn. Of course it’s not a barn any more. It’s my laboratory. It’s my workshop. There isn’t a happier comedian in the world than Mr. Joe Cook the day he putters around his work-bench and tool chest down there at Lake Hopatcong.

In this latest show of mine on Broadway, called “Fine and Dandy”, there are so many inventions and contraptions in it that the boys in the chorus have nicknamed me the Edison of the American stage. That musical comedy is chuck full of machinery. As a matter of fact the setting for the show is called the Fordyce Drop Forge and Tool Factory. And I bet there’s hundreds and hundreds of persons who never dreamed that you could weave such a ripsnorting comedy out of the daily life in such a plant.

Although I appear to be very much occupied throughout the entire performance, there isn’t much evidence that I do much work for Boss Fordyce. No sir, that’s because I’m too busy perfecting my inventions. But even the boss’s daughter thinks I’m a pretty good inventor. I manage to convince her and the first thing I know I’m appointed general manager of the works.

Well, sir, like any good general manager, I had to have a first class desk. And I did. However, I used an axe to open my mail and the desk began to look more like a butcher bench. Right beneath it, where you would have a wastebasket, I kept the flying cuspidor, in case any visitor had cigar ashes to flick or matches to toss.

In a side compartment of the desk I could produce coffee and doughnuts. But a little distance from this cabinet there was another trick arrangement. All I had to do was press a button and that part of the desk would open and reveal a layout of beverages and all the fixin’s. No gainsaying the fact that a desk like that ought to suit the taste of the president of the biggest corporation in the United States. I’m not mentioning any names, either. I’m going to sell that invention some day. In another act I produced three dummy horses. I invented them too. The best thing about those Dobbins is that no one can detect how they manage to peek out of their hides. And for dummy hosses they do some pretty slick performing. Well, sir, we had a lot of trouble breaking in those mules. They ran all over the stage at first. It took a ton of sugar to train them. I had a great deal of practice in being kind to dumb animals.

My next mechanical hallucination is a knockout. I must have had a nightmare when I doped that one out. I appear on the stage driving a chariot, just like a Ben Hur. It is drawn by a dummy horse, and driven by an outboard motor and trailed by a sea-sled. The patent office must have got a kick out of that one.

I’ve been doing comic stuff on the American stage and in the movies for a good many years, but I don’t know how I could ever fill the house with laughing gas enough to get the howling, shrieking guffaws which inventions like those provoke. It’s a pleasure to see them out there rocking in their seats.

For instance, just think of that trick filing cabinet we got up. I go there to reach down for some very important paper and what do I find instead? I find a live skunk. The only skunk ever to appear on the American stage. In another cabinet drawer I find a barber pole. I don’t know how to explain that, except that the feller ahead of me in the general manager’s job must have been a barber.

I got one mechanical apparatus in “Fine and Dandy” which must be a pride and joy to any of the inventors and engineers who pay the box-office tariff to see it. It looks like a portable gasoline station. It’s a combination machine for cracking nuts, busting balloons, making cigars, blowing up paper bags, scratching your back and for producing fruits and flowers. The latter is done through a boxing glove. You get socked, go to the hospital, then come the fruits and flowers.

This idea of mine of bringing mechanics and mechanisms to the stage gets into a faster stride a little later when the boss’s wife tells me she wants to shoot some golf. I’m still in my overalls, but in a jiffy I turn my garments inside out and there I am in plus fours and golf hose, all set for the fairways. We have an improvised golf course with a slick sandtrap. By means of my own wire invention, I am enabled to make some astonishing putts.

The boys would certainly be disappointed in their hero if I didn’t tell you something about the most remarkable invention I have ever devised. Like most of my engines, I haven’t been able to get anything more than laughing pressure out of them. I mean you wouldn’t exactly call them aids for the housewife or would the president of the General Electric Company decide that he would want to own my theatrical foundry.

There’s one other invention of mine that I’d like to tell you about. Right now we’re using it in “Fine and Dandy” but you never know when the good old days will come back, so I’d like you to paste this one inside your hat.

I got a nifty for the cocktail-shaking host. No doubt you’ve seen those springy things with handles at both ends. They’re for improving the chest expansion and bulging the arm muscles. Well, you split one of those implements in two, right in the middle. And you insert a couple of clamps there instead. Then you mix your juices in a regular cocktail shaker.

Next you insert the shaker in these two clamps. One end is inserted at the foot and you grip the other in your hand. Then you proceed to raise and lower your arm. The springs do the rest to your drink. It makes exquisite cocktails.

Whenever the name of Joe Cook is spoken among men who know a wise invention, I am told that they instantly think of my pet derrick- Yes sir, it’s a pippin. And I’ll leave it to you to guess how many midnight oils were spent in concocting this one, which was described in a previous issue of this magazine.

Well, sir, for a fellow who’s supposed to be the general manager of a foundry, they put me through a lot of paces in my latest show. I sing and dance, juggle illuminated clubs, balance vases on a pole on my chin going up a ladder, balance a ladder with a man aloft on the balls of my feet as I lie on my back and a string of other tricks I never invented. But during moments when I’m offstage I’m always figuring out some new gadget, trying to dope out some mechanical device which will make ’em laugh and laugh louder. I hope some guy that’s smarter than me at these stage inventions doesn’t manufacture a robot to take the place of Joe Cook. I’d like to be able to do that myself.