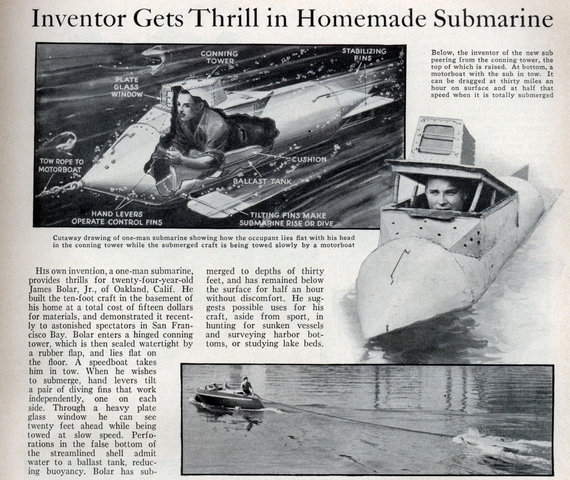 Inventor Gets Thrill in Homemade Submarine

His own invention, a one-man submarine, provides thrills for twenty-four-year-old James Bolar, Jr., of Oakland, Calif. He built the ten-foot craft in the basement of his home at a total cost of fifteen dollars for materials, and demonstrated it recently to astonished spectators in San Francisco Bay. Bolar enters a hinged conning tower, which is then sealed watertight by a rubber flap, and lies flat on the floor. A speedboat takes him in tow. When he wishes to submerge, hand levers tilt a pair of diving fins that work independently, one on each side. Through a heavy plate glass window he can see twenty feet ahead while being towed at slow speed. Perforations in the false bottom of the streamlined shell admit water to a ballast tank, reducing buoyancy. Bolar has submerged to depths of thirty feet, and has remained below the surface for half an hour without discomfort. He suggests possible uses for his craft, aside from sport, in hunting for sunken vessels and surveying harbor bottoms, or studying lake beds.