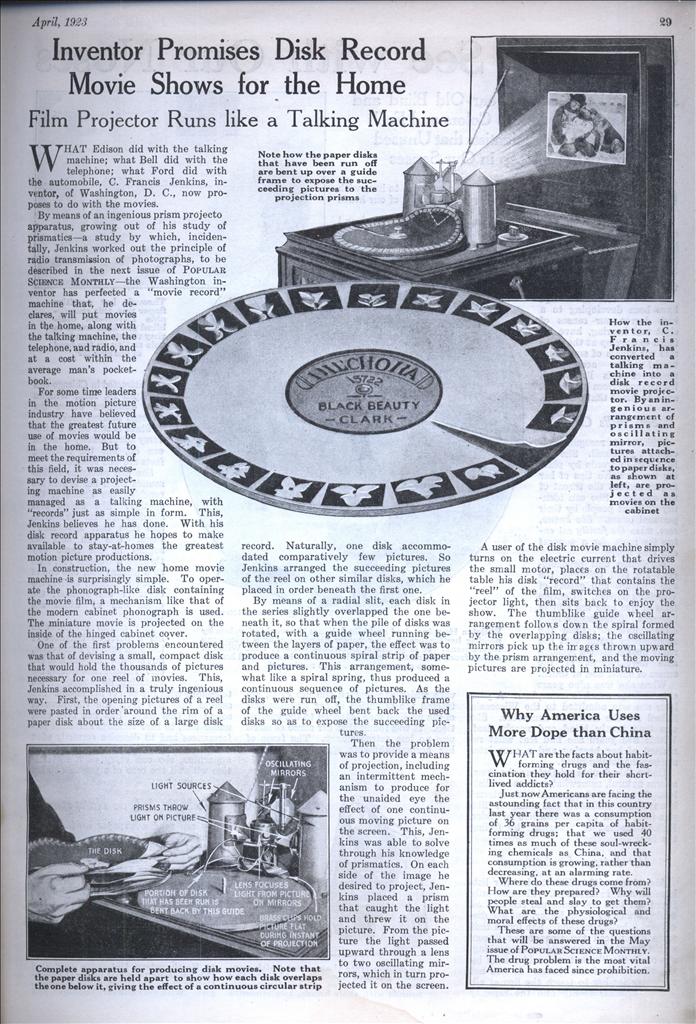 Film Projector Runs like a Talking Machine WHAT Edison did with the talking machine; what Bell did with the telephone; what Ford did with the automobile, C. Francis Jenkins, inventor, of Washington, D. C, now proposes to do with the movies.

By means of an ingenious prism projector apparatus, growing out of his study of prismaticsâ€”a study by which, incidentally, Jenkins worked out the principle of radio transmission of photographs, to be described in the next issue of Popular Science Monthlyâ€”the Washington inventor has perfected a “movie record” machine that, he declares, will put movies in the home, along with the talking machine, the telephone, and radio, and at a cost within the average man’s pocket-book.

For some time leaders in the motion picture industry have believed that the greatest future use of movies would be in the home. But to meet the requirements of this field, it was necessary to devise a projecting machine as easily managed as a talking machine, with “records” just as simple in form. This, Jenkins believes he has done. With his disk record apparatus he hopes to make available to stay-at-homes the greatest motion picture productions.

In construction, the new home movie machine is surprisingly simple. To operate the phonograph-like disk containing the movie film, a mechanism like that of the modern cabinet phonograph is used. The miniature movie is projected on the inside of the hinged cabinet cover.

One of the first problems encountered was that of devising a small, compact disk that would hold the thousands of pictures necessary for one reel of movies. This, Jenkins accomplished in a truly ingenious way. First, the opening pictures of a reel were pasted in order around the rim of a paper disk about the size of a large disk record. Naturally, one disk accommodated comparatively few pictures. So Jenkins arranged the succeeding pictures of the reel on other similar disks, which he placed in order beneath the first one.

By means of a radial slit, each disk in the series slightly overlapped the one beneath it, so that when the pile of disks was rotated, with a guide wheel running between the layers of paper, the effect was to produce a continuous spiral strip of paper and pictures. This arrangement, somewhat like a spiral spring, thus produced a continuous sequence of pictures. As the disks were run off, the thumblike frame of the guide wheel bent back the used disks so as to expose the succeeding pictures.

Then the problem was to provide a means of projection, including an intermittent mechanism to produce for the unaided eye the effect of one continuous moving picture on the screen. This, Jenkins was able to solve through his knowledge of prismatics. On each side of the image he desired to project, Jenkins placed a prism that caught the light and threw it on the picture. From the picture the light passed upward through a lens to two oscillating mirrors, which in turn projected it on the screen.

A user of the disk movie machine simply turns on the electric current that drives the small motor, places on the rotatable table his disk “record” that contains the “reel” of the film, switches on the projector light, then sits back to enjoy the show. The thumblike guide wheel arrangement follows down the spiral formed by the overlapping disks; the oscillating mirrors pick up the images thrown upward by the prism arrangement, and the moving pictures are projected in miniature.