I don’t think Press-On Nails would have sold as well if they were called “artificial horn”. Of course, if you grew up watching TV in the 80’s then there really is only one brand of nails (video) worth talking about. 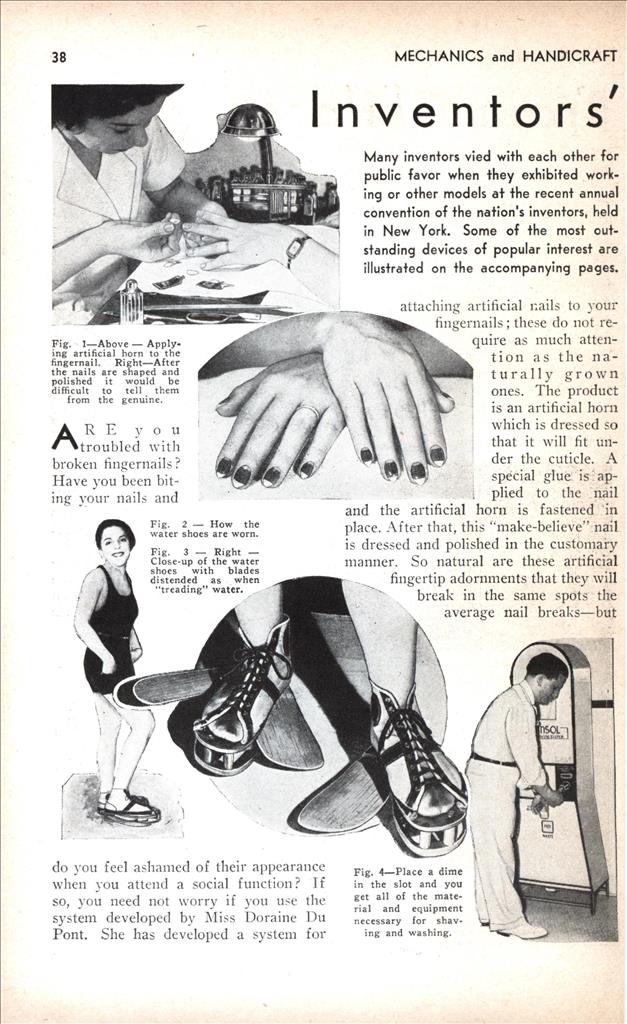 Many inventors vied with each other for public favor when they exhibited working or other models at the recent annual convention of the nation’s inventors, held in New York. Some of the most outstanding devices of popular interest are illustrated on the accompanying pages.

ARE you troubled with broken fingernails? Have you been biting your nails and do you feel ashamed of their appearance when you attend a social function? If so, you need not worry if you use the system developed by Miss Doraine Du Pont. She has developed a system for attaching artificial nails to your fingernails; these do not require as much attention as the naturally grown ones. The product is an artificial horn which is dressed so that it will fit under the cuticle. A special glue is applied to the nail and the artificial horn is fastened in place. After that, this “make-believe” nail is dressed and polished in the customary manner. So natural are these artificial fingertip adornments that they will break in the same spots the average nail breaks—but not as often. The method is illustrated in Fig. 1.

For walking on water Frank Jacobs of Seattle, Washington has developed a pair of shoes with wooden fins. When the foot is thrust downward, as in treading water, the fins extend laterally; when raised the fins are automatically retracted, Figs. 2 and 3.

A “self-shaving” system for use in public rest rooms was also exhibited at the National Inventor’s Congress. Inserting a dime into the slot and pressing the lever delivers a sanitary celluloid razor (of course, with a steel blade), a small tube of shaving cream, face soap, absorbent paper towel and an antiseptic powder puff. After you are through using the materials you can throw the entire works away. This is illustrated in Fig. 4.

Every housewife knows how difficult it is to cook asparagus, not because there is anything hard about cooking this delicacy but because, after the asparagus is cooked, there is considerable trouble in removing them whole from the vessel in which they were boiled. Furthermore, the lower ends are always tougher than the tops. To overcome both difficulties an enterprising inventor has developed an asparagus cooking pot which cooks the vegetable in an upright position. Thus, the lower ends get the heaviest boiling, the upper ends are steamed and the entire bunch can be removed from the pot in perfect shape and without danger of breakage. (Fig. 8).

A hen trap which will automatically indicate to the farmer which hens lay and will segregate the laying hens from the others is illustrated in Fig. 5. As the hen enters this nest the entrance closes. If the hen lays an egg the exit to the hen coop opens but if no such deposit is made the exit to the barnyard opens and that hen is then permitted to roam until it comes time for conversion into “meat-on-the-table.”

In Fig. 6 is a small mechanism intended to guard against “Peeping Toms” and also to hold the key in the lock to prevent turning it from the outside. Its operation can be seen from an examination of the photograph.

A fool-proof ash tray which will not drop half – burned cigarettes onto the top of the table and which will not be unsightly after it has been in use for a short length of time is illustrated in Fig. 7. This tray, a small metal box, has a wire grid on which the cigarettes are rested.

A molded “hot dog” is produced by the machine invented by E. E. Marquart of Toledo, Ohio. The frankfurter is placed in one of the baking molds, the mold is closed and a mixture of butter, cheese and other substances is poured in the opening at the top. Electricity heats the mold and the product comes out looking and tasting somewhat like corn on the cob—so they tell us. (Fig. 10.) Although most beaches have rules against disrobing, apparently no law applies against the “portable bath house,” the invention of Sam Palm of Chicago. You slip this over your head, tie it up around the neck, step out of your street attire and don- your bathing suit; when ready to go home you reverse the procedure. (Fig. 11.) A rotary hamburger fryer was exhibited by W. A. Parr of Chicago, Illinois. The meat is put on the revolving disc at one end and by the time it comes back again it has been fried on both sides “untouched by human hands.” (Fig. 13.) Many wives have deplored the fact that their husbands snore. A boon to such sleepless wives was invented by Emil Klotze of Buffalo, New York. This is a metal fitting which goes over the sleeper’s mouth, preventing him from breathing through that orifice and forcing him to breathe through the nose. The only problem which the wives will have will be to make their husbands wear this metal harness.

Figs. 14 and 15 are mouse or rat traps. In the former the device is plugged in to the house lighting circuit and any mouse entering the same is automatically electrocuted. In the latter we have an automatic resetting trap. The mouse or rat entering this trap will find the entrance blocked. In an effort to escape, it enters another cage which causes the entrance of the trap to open automatically. Meanwhile the first customer has been safely locked away.

And for those who would have dimples, E. Isabella Gilbert developed the item here shown. The theory is that if you wear this dimpler for five minutes at a time, two or three times a day, it will break down the facial muscles to the point where the dimples show naturally when you smile. Medical science says that dimples are defects in the facial muscles. No doubt many girls would be proud of such defects.