I particularly like the cow on the second page. You can fill it up with milk and um… milk it. 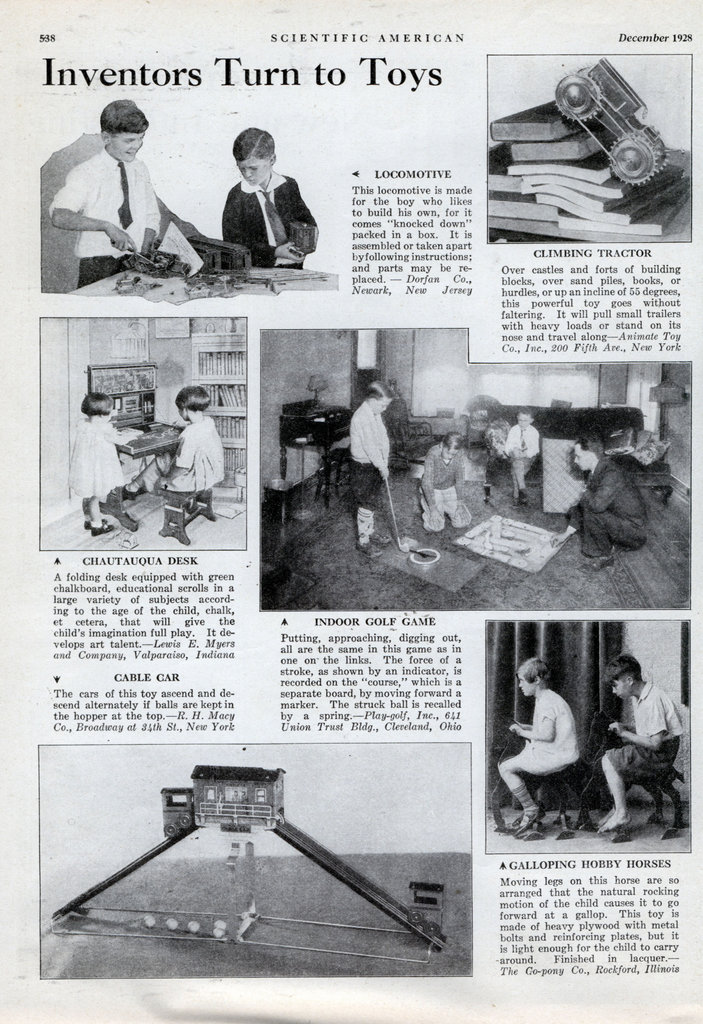 This locomotive is made for the boy who likes to build his own, for it comes “knocked down” packed in a box. It is assembled or taken apart by following instructions; and parts may be replaced. â€” Dorfan Co., Newark, New Jersey

Over castles and forts of building blocks, over sand piles, books, or hurdles, or up an incline of 55 degrees, this powerful toy goes without faltering. It will pull small trailers with heavy loads or stand on its nose and travel alongâ€”Animate Toy Co., Inc., 200 Fifth Ave., New York

A folding desk equipped with green chalkboard, educational scrolls in a large variety of subjects according to the age of the child, chalk, et cetera, that will give the child’s imagination full play. It develops art talent.â€”Lewis E. Myers and Company, Valparaiso, Indiana

The cars of this toy ascend and descend alternately if balls are kept in the hopper at the top.â€”R. H. Macy Co., Broadway at $Mh St., New York

Putting, approaching, digging out, all are the same in this game as in one on the links. The force of a stroke, as shown by an indicator, is recorded on the “course,” which is a separate board, by moving forward a marker. The struck ball is recalled by a spring.â€”Play-golf, Inc., 641 Union Trust Bldg., Cleveland, Ohio

Moving legs on this horse are so arranged that the natural rocking motion of the child causes it to go forward at a gallop. This toy is made of heavy plywood with metal bolts and reinforcing plates, but it is light enough for the child to carry -around. Finished in lacquer.â€” The Go-pony Co., Rockford, Illinois

ON this page is illustrated a group of toys that will delight the child who has a mechanical turn of mind. The photograph lettered A shows a spiral track upon which a toy railroad gondola runs. When the car reaches the bottom, it is caught by an elevator which is then lifted by means of a cord to the top position where the car may again start its speedy trip to the bottom. Photograph B is a swimming pool which includes a dressing room for the doll swimmers, diving platform, and a shower. The shower is a miniature pump, operated by a lever, which lifts the water from the main basin up to the shower head. C shows a set of lead-molding tools with which lead soldiers, knights, or other figures may be cast.

The set consists of a ladle for melting lead over a flame, molds, tongs for handling the hot figures, lead, and paint for decorating the figures after they have cooled. Although the cow shown in D is only a toy, she can be made to give milk and the child who plays with this toy will get a great deal of amusement out of milking her.

The secret of this lies in the tank within her body into which milkâ€”or chalk and waterâ€”may be poured through the opening in her back. The automobile shown in E gives the ingenious child a chance to apart and assembled as many times as the owner may wish. A ski-jumper that really jumps is shown in photograph F. When the figure, which is mounted on skis with wheels, is placed at the top of the incline, it races down, hits the trigger near the bottom, and is vaulted by the mechanism over the bar between the two flag-poles. Sometimes he doesn’t quite make it and his skis catch on the rod. This serves simply to make him turn a somersault and then go over the rod. G shows a new airplane kite which, when flying, looks just like a distant plane.â€” F. A. O. Schwarz, 303 Fifth Ave., New York