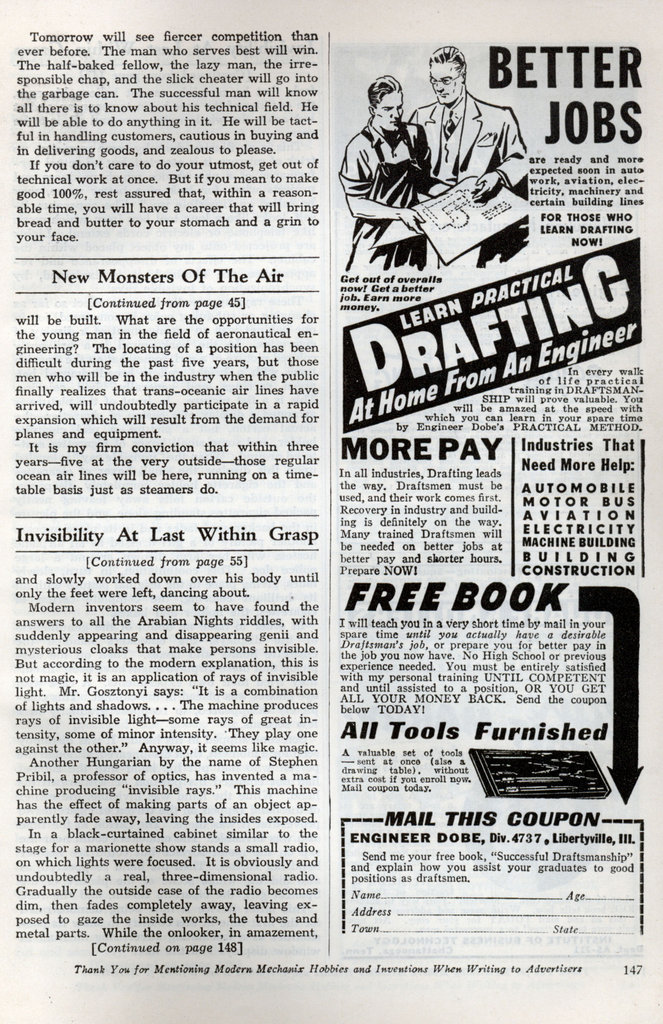 If you did not think that you were just “seeing things,” right off you’d say, “Some invisible wires, or anyway, a cleverly arranged set of mirrors.” But you would be wrong in your guess. At least so says Mr. Adam Gosztonyi, the inventor of a machine which he claims can accomplish just such disappearing acts as have been described.

In a demonstration of this machine recently the stage was set with a backdrop of wide red and white stripes. A chair, lifted from among the onlookers so that all could see that it was genuine, was placed in front of this conspicuous background. Then a young manâ€”a very substantial young manâ€”who had been walking around among the onlookers, stepped onto the stage and sat down in the chair. Soon he grew dim in appearance, became sort of thin vapor so that the striped backdrop was visible through the outlines of his body. Then he disappeared completely. But the chair remained, whole and firm, and the young man continued talking to the onlookers as an evidence of his presence. His disappearance, nevertheless, was to all intents and purposes so absolutely real that when the inventor called to the operator of the machine to bring the young man back to sight, one of the onlookers exclaimed: “But suppose you should ever fail to bring him back. What then?”

But the operator did bring the young man back, only to try the experiment all over again, but this time the young man moved about, did a few jig steps with his feet, etc. The disappearing effect began with his head and slowly worked down over his body until only the feet were left, dancing about.

Modern inventors seem to have found the answers to all the Arabian Nights riddles, with suddenly appearing and disappearing genii and mysterious cloaks that make persons invisible. But according to the modern explanation, this is not magic, it is an application of rays of invisible light. Mr. Gosztonyi says: “It is a combination of lights and shadows. . . . The machine produces rays of invisible lightâ€”some rays of great intensity, some of minor intensity. They play one against the other.” Anyway, it seems like magic.

Another Hungarian by the name of Stephen Pribil, a professor of optics, has invented a machine producing “invisible rays.” This machine has the effect of making parts of an object apparently fade away, leaving the insides exposed.

In a black-curtained cabinet similar to the stage for a marionette show stands a small radio, on which lights were focused. It is obviously and undoubtedly a real, three-dimensional radio. Gradually the outside case of the radio becomes dim, then fades completely away, leaving exposed to gaze the inside works, the tubes and metal parts. While the onlooker, in amazement, feels that he certainly cannot believe his eyes, the outlines of the case begin to reappear, and at last again the whole radio, case and all, is to be seen.

This is no illusion done by some magician, no trick of mirrors, it is asserted, but an actual performance of a new device which produces and projects what, for lack of a better name, may be called an “invisible ray.” The apparatus, itself, looks like a long tool box from which cords like telephone or electric cords extend. Lights are projected onto any object placed within the cabinet. The effects of disappearance and reappearance are obtained, it is explained, by synchronization of invisible rays.

These rays apparently have no effect so far as changing or subduing color is concerned, for in one cabinet was an arrangement of a display of cigarettes. In the background is a brilliantly colored picture of a girl, somewhat on the Spanish type, with a bright yellow broadbrimmed hat, green earrings, and generally vivid coloring.

This is a flat picture. In front of the picture is arranged a display of a carton of cigarettesâ€”the actual carton, not a pictureâ€”a real cigarette holder, and some small boxes of cigarettes scattered around. When the “invisible ray” is leveled upon this display, the small boxes of cigarettes and the cigarette holder completely disappear, the outside carton falls away leaving neatly packed cigarettes standing alone, and the picture in the background fades and in its place appears another picture of a girl dressed as an airplane hostess with her arm thrown around a large police dog. This combination, in turn, slowly fades, giving place to the original picture with all its brilliant coloring, the complete carton of cigarettes, the holder and boxes.

In order to have no doubt of the genuineness of the displays, the onlookers handled the cigarette holder and boxes. Then on the suspicion that these displays might have been “fixed,” they tried their own experiments. A case with eye glasses was placed in the cabinet. This completely disappeared, to reappear gradually in a few seconds.

Someone slipped in his hand. It was distinctly seen for a moment, then disappeared, although the person who had put his hand into the cabinet had not changed his position or withdrawn his hand. While the hand was invisible, the owner of the hand rapped on the carton of cigarettes to prove that it was there. The carton at the time also was invisible. The onlookers could hear the rap on the metal surface but could see neither hand nor carton. Then the hand reappeared, as also did the whole scene of the picture of the Spanish girl, the cigarette carton, and the rest.

This latter device is now being demonstrated for the first time in this country to show its possibilities as a fascinating advertising medium in window displays and the like.