Fortune
Issue: Oct, 1961
Posted in: Advertisements
Tags: sexism
No Comments on Is Education for Women Your Blind Spot? (Oct, 1961) 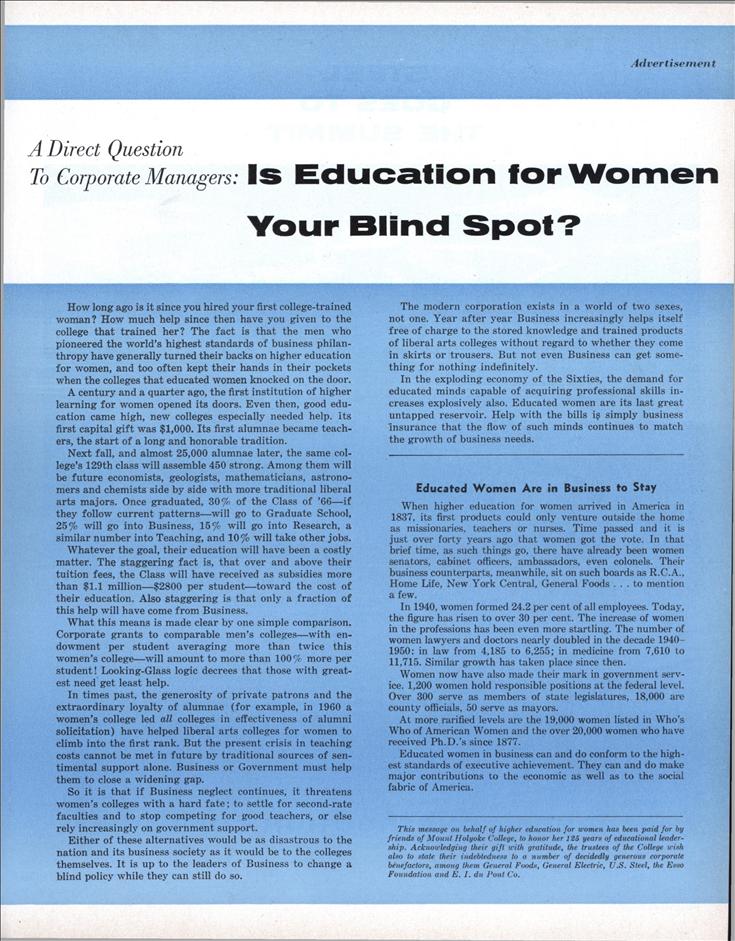 A Direct Question To Corporate Managers: Is Education for Women Your Blind Spot?

How long ago is it since you hired your first college-trained woman? How much help since then have you given to the college that trained her? The fact is that the men who pioneered the world’s highest standards of business philanthropy have generally turned their backs on higher education for women, and too often kept their hands in their pockets when the colleges that educated women knocked on the door.

A century and a quarter ago, the first institution of higher learning for women opened its doors. Even then, good education came high, new colleges especially needed help, its first capital gift was $1,000. Its first alumnae became teachers, the start of a long and honorable tradition.

Next fall, and almost 25,000 alumnae later, the same college’s 129th class will assemble 450 strong. Among them will be future economists, geologists, mathematicians, astronomers and chemists side by side with more traditional liberal arts majors. Once graduated, 30% of the Class of ’66—if they follow current patterns—will go to Graduate School, 25% will go into Business, 15% will go into Research, a similar number into Teaching, and 10% will take other jobs.

Whatever the goal, their education will have been a costly matter. The staggering fact is, that over and above their tuition fees, the Class will have received as subsidies more than $1.1 million—$2800 per student—toward the cost of their education. Also staggering is that only a fraction of this help will have come from Business.

What this means is made clear by one simple comparison. Corporate grants to comparable men’s colleges—with endowment per student averaging more than twice this women’s college—will amount to more than 100% more per student! Looking-Glass logic decrees that those with greatest need get least help.

In times past, the generosity of private patrons and the extraordinary loyalty of alumnae (for example, in 1960 a women’s college led all colleges in effectiveness of alumni solicitation) have helped liberal arts colleges for women to climb into the first rank. But the present crisis in teaching costs cannot be met in future by traditional sources of sentimental support alone. Business or Government must help them to close a widening gap.

So it is that if Business neglect continues, it threatens women’s colleges with a hard fate; to settle for second-rate faculties and to stop competing for good teachers, or else rely increasingly on government support.

Either of these alternatives would be as disastrous to the nation and its business society as it would be to the colleges themselves. It is up to the leaders of Business to change a blind policy while they can still do so.

The modern corporation exists in a world of two sexes, not one. Year after year Business increasingly helps itself free of charge to the stored knowledge and trained products of liberal arts colleges without regard to whether they come in skirts or trousers. But not even Business can get something for nothing indefinitely.

In the exploding economy of the Sixties, the demand for educated minds capable of acquiring professional skills increases explosively also. Educated women are its last great untapped reservoir. Help with the bills is simply business Insurance that the flow of such minds continues to match the growth of business needs.

Educated Women Are in Business to Stay

When higher education for women arrived in America in 1837, its first products could only venture outside the home as missionaries, teachers or nurses. Time passed and it is just over forty years ago that women got the vote. In that brief time, as such things go, there have already been women senators, cabinet officers, ambassadors, even colonels. Their business counterparts, meanwhile, sit on such boards as R.C.A., Home Life, New York Central, General Foods … to mention a few.

Women now have also made their mark in government service. 1,200 women hold responsible positions at the federal level. Over 300 serve as members of state legislatures, 18,000 are county officials, 50 serve as mayors.

Educated women in business can and do conform to the highest standards of executive achievement. They can and do make major contributions to the economic as well as to the social fabric of America.

This message on behalf of higher education for women has been paid for by friends of Mount Holyoke College, to honor her 125 years of educational leadership. Acknowledging their gift with gratitude, the trustees of the College wish also to stale their indebtedness to a number of decidedly generous corporate benefactors, among them General Foods, General Electric, U.S. Steel, the Esso Foundation and E. I. du Pont. Co.