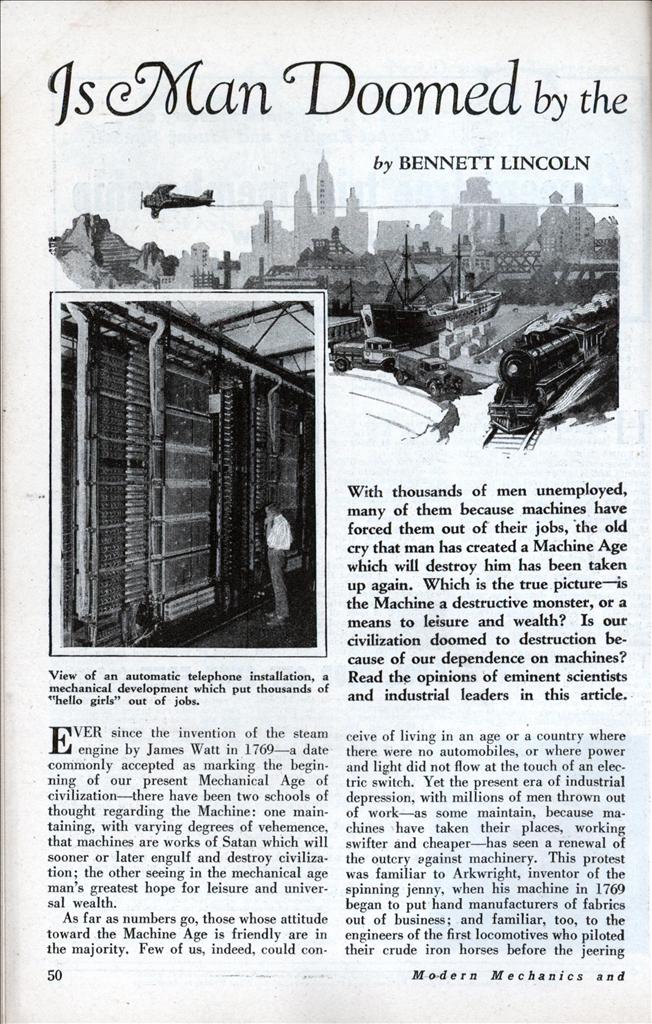 Is Man Doomed by The Machine Age?

With thousands of men unemployed, many of them because machines have forced them out of their jobs, the old cry that man has created a Machine Age which will destroy him has been taken up again. Which is the true picture—is the Machine a destructive monster, or a means to leisure and wealth? Is our civilization doomed to destruction because of our dependence on machines? Read the opinions of eminent scientists and industrial leaders in this article.

EVER since the invention of the steam engine by James Watt in 1769—a date commonly accepted as marking the beginning of our present Mechanical Age of civilization—there have been two schools of thought regarding the Machine: one maintaining, with varying degrees of vehemence, that machines are works of Satan which will sooner or later engulf and destroy civilization; the other seeing in the mechanical age man’s greatest hope for leisure and universal wealth.

As far as numbers go, those whose attitude toward the Machine Age is friendly are in the majority. Few of us, indeed, could conceive of living in an age or a country where there were no automobiles, or where power and light did not flow at the touch of an electric switch. Yet the present era of industrial depression, with millions of men thrown out of work—as some maintain, because machines have taken their places, working swifter and cheaper—has seen a renewal of the outcry against machinery. This protest was familiar to Arkwright, inventor of the spinning jenny, when his machine in 1769 began to put hand manufacturers of fabrics out of business; and familiar, too, to the engineers of the first locomotives who piloted their crude iron horses before the jeering eyes of skeptics who held that the steam monsters were a violation of the laws of God, man, and common decency.

Well, where are we heading? Will machines, sooner or later, destroy civilization by putting all men out of work and concentrating wealth in the hands of a few? It is only fair to point out that machines create new jobs as well as destroying old ones.

Take the example of the radio. This invention has been with us ten years. During that time half the homes in America have been equipped with receiving sets, and the building of these millions of receivers has employed thousands of men and women. This is the pleasant side of the picture. Now let’s look on the other side. The business of manufacturing and selling pianos, and, to a lesser extent, other musical instruments, has confessedly slumped. It is usual to charge this slump to the radio and other forms of mechanical music, which have supplied the need for music in the home. Business fell off alarmingly for talking machine manufacturers until they, too, started turning out radios, either alone or in combination with their standard product.

The obvious answer is that the invention of a new machine may throw out of work men in a particular job, but at the same time the machine itself creates new jobs. The automobile, and industries depending on it, employs upwards of 4,000,000 men and women. The automobile put out of business a few thousand proprietors of livery stables, but no one nowadays has the temerity to charge this against the industry.

Let’s see what opinions scientists and industrial leaders close to the public pulse have expressed on this consuming subject.

Joseph N. Weber, president of the American Federation of Musicians, is the leader of a campaign in which more than $500,000 was spent last year to stem the advance of “Robot Music”. Magazine advertisements reaching thousands of people appealed to the public to oppose itself to the advance of mechanical music in the theatres. But the musical robots came marching down until today there is hardly a theatre in the country which is not equipped for sound effects for talkies.

Behind this campaign lies the distress of thousands of musicians put out of work by the talkies.

“The time is coming fast,” said Mr. Weber, “when the only living thing around a motion picture house will be the person who sells you your ticket. Everything else will be mechanical. Canned drama, canned music, canned vaudeville. We think the public will tire of mechanical music and will want the real thing. We are not against scientific development of any kind, but it must not come at the expense of art. We are not opposing industrial progress. We are not even opposing mechanical music except where it is used as a profiteering instrument for artistic debasement.”

Edward C. Rybicki director of the New York City Free Employment Bureau, comes as closely in contact with unemployment as any other man in the country.

“Man has suddenly found himself swallowed up in a huge whirlpool of swift industrial and mechanical development,” says Mr. Rybicki. “I would venture to say that four-fifths of the 500,000 men who are out of jobs in New York, City find themselves in that plight because they have outlived their usefulness. Because new industries have sprung up with a new generation, leaving them to drift in decrepit and dying industries.”

“Radio manufacturers,” says Dr. de Forest, “are working on low power tubes and loud speakers for battery operation, which will give the uneleetrified home reception comparable to that enjoyed by city dwellers. The use of such sets will create a market for 6,000,000 radios.

“Another forthcoming development in radio the perfection of the pentode tube, a British invention, to do away with the three tubes now used in audio-frequency circuits. American firms are now experimenting with that particular tube.

“Television will not be on the market this year and perhaps not for some time to come. Radio control of warships, airplanes, and tanks is also a long way in the future.” But some day, it is safe to predict, television sets will become common—and when they do the manufacture of them will give work to thousands of men.

During 1930, which has gone down in the books of time as an Industrial Dark Age, a new business grew up and flourished almost overnight. This was the miniature golf course industry. It became a business, in which more than $125,000,000 was invested, and it’s still going strong. This stands as an example of the ability of a new invention to create new wealth.

Walter S. Gifford, president of the American Telephone and Telegraph Company, looks toward a future all the brighter because of machines and scientific development. In passing, it may be remarked that Mr. Gifford’s company is one of the largest employers of labor in the United States, and that this corporation is built up around a simple machine — the telephone.

“This depression will soon pass,” Mr. Gifford has said, “and we are about to enter a period of prosperity the like of which no country has ever seen before. It is inevitable that business through science will work toward a social and industrial Utopia which will be gained by the perfection of the best and cheapest possible service consistent with financial safety.”

Quite a different attitude is held by John Van Nostrand Dorr, famous engineer and former associate of Thomas A. Edison.

“We will eventually become lost in the multiplicity of things which sustain or amuse us unless we do more than invent things or processes,” declares Mr. Dorr. “As a result, engineering might fulfill its proper purposes of meeting the simpler needs of men while, progressively, taking back from him the burden of labor, mechanics, physics, and chemistry should be made to serve art, music, philosophy, and literature by some such means.”

Germany is coming into post-war prominence as a giant laboratory wherein the mechanical age finds its freest expression. She has produced the world’s largest seaplanes, has led the world in constructing dirigible airships, and has produced inventions capable of altering the economic structure of vast industries. A case in point is the hydrogenation of oil by a German process, in which a gallon of crude oil is made to produce practically a gallon of gasoline, through the addition of hydrogen atoms. Usual methods now in use produce about half a gallon of gasoline from one gallon of oil. Here’s an instance where factories may be built and men employed to carry out this new manufacturing process.

Over-production is, of course, the charge currently hurled against the Machine. That the world has at present a surplus stock of goods, from wheat to steel, is admitted. But the difficulty lies in the fact that the machine has given man leisure which he doesn’t know how to dispose of. Not being able to employ his leisure to advantage, he goes on working at top speed, and his machines, which are after all under his control, are charged with over-production.

To remedy this, labor leaders have proposed a six-hour working day. In six hours the factory workman produces more goods, with the aid of his machine, than his fellow workman a hundred years ago could produce in a week.

The intricate construction of our modern industrial fabric can best be understood if one traces the uses to which a raw product is put, and observes the influence of machines in creating wealth from it. Machines, after all, have little to do with the overproduction of basic commodities such as wheat, which, although harvested largely by machines in this country, can trace its overproduction to countries such as Russia where the mechanical age has hardly begun.

Take cotton as an example. Formerly it was used almost exclusively as a fabric for clothing. Today more cotton is used in the manufacture of automobile tires than in the making of men’s shirts. Can a grower of cotton, then, declaim against the machine age, which furnishes him with an outlet for his product which, if it did not exist, would force him to accept ruinous prices?

Civilization, unquestionably, has adjustments to make before it is entirely in tune with the age. But with inventive young Americans turning out new devices every day, creating new industries and outmoding old ones, it would seem safe to predict that both civilization and the machine will survive, and that it will be outdated conceptions of how industry should be run that will pass into the discard.