Modern Mechanix
Issue: May, 1935
Posted in: Aviation, War
Tags: airships
9 Comments on Is The Military Dirigible Doomed? (May, 1935) 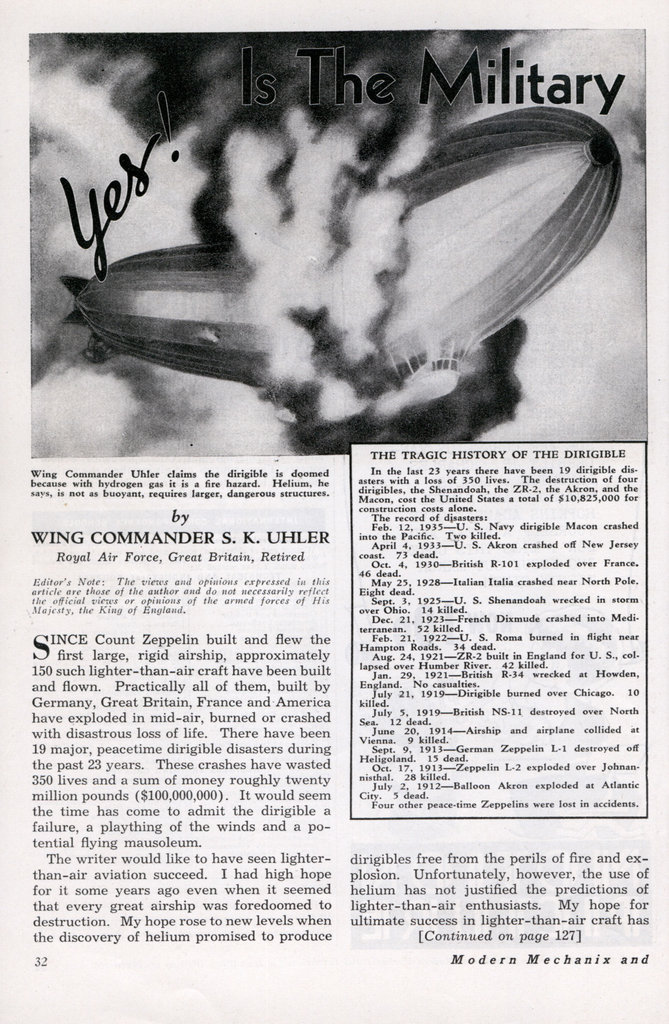 Is The Military Dirigible Doomed?

Royal Air Force, Great Britain, Retired Editor’s Note: The views and opinions expressed in this article are those of the author and do not necessarily reflect the official views or opinions of the armed forces of His Majesty, the King of England.

SINCE Count Zeppelin built and flew the first large, rigid airship, approximately 150 such lighter-than-air craft have been built and flown. Practically all of them, built by Germany, Great Britain, France and America have exploded in mid-air, burned or crashed with disastrous loss of life. There have been 19 major, peacetime dirigible disasters during the past 23 years. These crashes have wasted 350 lives and a sum of money roughly twenty million pounds ($100,000,000). It would seem the time has come to admit the dirigible a failure, a plaything of the winds and a potential flying mausoleum.

The writer would like to have seen lighter-than-air aviation succeed. I had high hope for it some years ago even when it seemed that every great airship was foredoomed to destruction. My hope rose to new levels when the discovery of helium promised to produce dirigibles free from the perils of fire and explosion. Unfortunately, however, the use of helium has not justified the predictions of lighter-than-air enthusiasts. My hope for ultimate success in lighter-than-air craft has been dashed with each major dirigible disaster until, at last, I find myself forced to admit that the principles of lighter-than-air flight are fundamentally unsound and can never be made otherwise.

The aerial buoyancy of helium is slightly less than hydrogen while the weight of air that must be displaced to make a dirigible float is governed by the unalterable laws of physics. This means that an airship to attain maximum lifting power and minimum wind resistance must be flown with hydrogen, and if we use hydrogen we retain the hazards of fire and explosion.

The loss of the Shenandoah, Akron, and Macon has proved that the hope of a safe and reliable helium airship is an idle dream. In order to utilize helium and attain the speed, cruising range and lifting power demanded in these ships it was necessary to build them to unprecedented size. This subjected them to stresses and strains that no metal within given weight limits can stand.

Many of the world’s leading military and naval authorities are also convinced the dirigible is too easy a target and too vulnerable for any practical military use. One would have a jolly time gathering up the pieces of any dirigible that is ever fired upon by a modern anti-aircraft battery.

After a series of disastrous experiences with dirigibles England abandoned them several years ago in favor of aeroplanes for both military and commercial purposes. Italy soured upon the dirigible when Signor Umberto Nobile executed his infamous but tragic comedy of errors in the Arctic with the airship Italia during the summer of 1928. France’s faith in the dirigible went down the chute with the loss of the Dixmude. No doubt the crashes of the Akron and Macon will settle the hash of the dirigible in America. Germany is the only nation still attempting to carry on â€”trembling in her boots for fear of what may happen any day to the Graf Zeppelin, an old bag of hydrogen, the dying hope of lighter-than-air enthusiasm.

NO!
by LIEUTENANT JOHN E. HOGG

U. S. Naval Reserve Editor’s Note: The views and opinions expressed in this article arc those of the author and should not be construed as reflecting the official views or opinions of the United States Navy Department.

SOME years ago an American by the name of Holland invented the submarine. The United States recognized its military possibilities but developed a bad case of cold feet after several of Mr. Holland’s early, experimental craft submerged permanently. So, we abandoned the submarine, let Germany pioneer the thing, and use it against us to our untold disadvantage in the World War.

As if we had learned nothing by that blunder the future of lighter-than-air craft development now hangs in the balance insofar as the United States is concerned. Because three of the four helium airships we have owned and operated have crashed from structural failures, a considerable demand has arisen that we spend no more money and risk no more lives in the attempted development of a type of aircraft now termed by manyâ€”a demonstrated impracticability.

If the mob psychology bred of the Shenandoah, Akron, and Macon disasters leads us to abandon further dirigible development, even temporarily, the results may be far-reaching and inimical to our national hopes and ambitions. We may repeat our mistake with the submarine. Some more far-seeing and less-easily-discouraged nation will undoubtedly carry on from the point where we leave off. To that nation we may surrender future naval supremacy and commercial advantages of incalculable value.

The history of dirigible pioneering has admittedly been disastrous, but there is nothing in it to indicate that successful lighter-than-air craft are impossible of attainment. The use of hydrogen, an explosive gas, as the agent of aerial buoyancy has been responsible for the loss of most of the dirigibles built prior to 1920, and the loss of several built and flown with hydrogen by foreign governments in more recent years. Since helium became available the United States government has owned and operated four helium airships, three of which have crashed from structural failures or a combination of structural failure and unskilled handling.

Our brief experience in the field of dirigible development has proved nothing more than these three thingsâ€”(1) That the use of helium has eliminated the peril of fire and explosion in lighter-than-air craft. (2) That we have not yet mastered the engineering problems of building dirigibles that are structurally safe. (3) That we have not developed the necessary skill to operate them.

Those maintaining dirigibles are a failure forget that Zeppelin passenger service was inaugurated in Germany in 1910 with luxuriously-appointed dirigibles, and that these airships, flown with hydrogen, made 760 flights carrying 14,000 passengers about half a million miles up to the World War. They forget the German Graf Zeppelin, which flying with hydrogen has met every requirement of a successful airship for ten years.

There is nothing new about those persons now advocating adandonment of further dirigible development. They’re the modern version of unimaginative men who jeered Robert Fulton and his steamboat. They thought the Wright Brothers were madmen. Their taunt to the stranded motorist of 1904 wasâ€””Get a horse!”