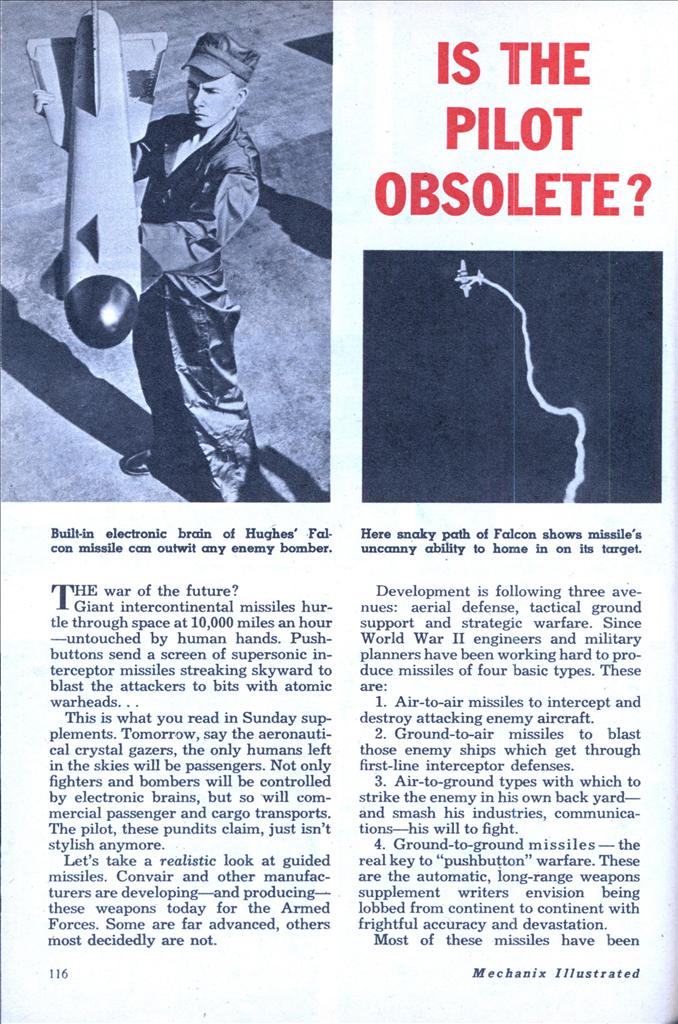 IS THE PILOT OBSOLETE?

Missiles and rockets guided by “machines that think” are already in the air. Do our fantastic plans for tomorrow doom all piloted aifcraft?

By R. C. Sebold,
Vice President of Engineering, Convair, As told to B. W. Von Block

THE war of the future? Giant intercontinental missiles hurtle through space at 10,000 miles an hour —untouched by human hands. Pushbuttons send a screen of supersonic interceptor missiles streaking skyward to blast the attackers to bits with atomic warheads. . .

This is what you read in Sunday supplements. Tomorrow, say the aeronautical crystal gazers, the only humans left in the skies will be passengers. Not only fighters and bombers will be controlled by electronic brains, but so will commercial passenger and cargo transports. The pilot, these pundits claim, just isn’t stylish anymore.

Let’s take a realistic look at guided missiles. Convair and other manufacturers are developing—and producing-— these weapons today for the Armed Forces. Some are far advanced, others most decidedly are not.

2. Ground-to-air missiles to blast those enemy ships which get through first-line interceptor defenses.

3. Air-to-ground types with which to strike the enemy in his own back yard— and smash his industries, communications—his will to fight.

4. Ground-to-ground missiles — the real key to “pushbutton” warfare. These are the automatic, long-range weapons supplement writers envision being lobbed from continent to continent with frightful accuracy and devastation.

Most of these missiles have been given colorful descriptive names, such as Falcon, Meteor, Oriole, Sparrow, Sidewinder—all air-to-air types. Among ground-to-air missiles, examples are the Convair-Navy Terrier. This is in production and the Navy announced recently that it has proven itself so accurate that the Terrier knocked drone targets out of the sky with direct hits. This is especially remarkable because the missiles used in the tests were not armed with explosive warheads but brought down the targets by colliding’ with them!

The Talos and Lark are missiles for shipboard use. The Army’s Nike—first in-service U. S. Air Defense missile— will soon be protecting 15 major American cities and later our Alaskan bases.

Air-to-ground weapons include the B-63 Rascal rocket and the “Petral”—a turbo-jet powered type designed for use by aircraft and helicopters against en- emy submarines and surface vessels.

Ground-to-ground missiles have not been neglected either. These now. include the B-61 Matador, a medium-range Air Force pilot less bomber. The Matador is now operational in Germany. The Navajo and Snark (a swept-wing pilotless bomber) are strategic intercontinental missiles. Also in production is the Regulus for cruiser and submarine launchings against enemy ships and submarines. Also in this impressive arsenal is the Atlas ballistics missile.

The-missile is a complex, costly one-shot weapon—usable only once. The Convair-Navy Terrier and similar types must find their targets and blast them to bits (destroying themselves in the bargain) or they are wasted. They do not return if they miss, nor can they be recovered.

Every missile component must work perfectly. If only one tiny part fails to function—for even a split-second—the weapon is lost, the mission is a failure. In this age of nuclear weapons, no sane military planner or aircraft designer would entrust the nation’s air defense entirely to robots. Certainly not until every possibility of mechanical defect or malfunction is eliminated completely.

Can missiles or similar electronically-controlled devices carry out the military missions now entrusted to conventional aircraft?

Military observers and experts point out that a nation begins to fight each new war with the weapons on which it relied in the previous one. While the work in the laboratories and on the drafting tables goes on, designing, developing and producing the weapons of tomorrow, the military strategists must be ready to fight with what is available today.

Is the human pilot obsolete or obsolescent? Or is he likely to become so in the next few crucial years?

The aeronautical engineers—the men who do the planning and building of tomorrow’s aircraft—don’t think so. Guided missile research, development and manufacture proceed at full blast but there is still a heavy demand for piloted planes.

There has been no cut-back in military orders for F-86 or F-100 series fighters. In fact, Convair has just come up with a new interceptor or bomber-destroyer, the F-102-A. Supersonic, delta-winged, this all-weather Air Force jet will be rolling off production lines for years to come.

The F-102-A is an interceptor. It will not soon become obsolete. And it is a piloted aircraft. And, unlike a pilotless guided missile, it can be used again and again on combat missions.

The fine judgment and quick reaction of the human pilot are required for another kind of mission—tactical air support. In attacks supporting ground troops, situations change in moments. Battle lines are fluid, flexible, as troops attack or retreat. New “targets of opportunity” may present themselves suddenly.

Such a mission is meat for pilot-controlled planes. A new Convair-Navy ship, the XFY-1 Pogo is ideally suited for tactical air support. The delta-wing Pogo can take off straight up from a base no bigger than half a tennis court! The Pogo flies its mission—then lands, backing down, tail first, on a pinpoint. In the air, it is able to hover over its target, or dart away at more than 500 miles an hour! No electronic device yet invented could duplicate a Pogo attack pilot’s job!

The B-36 won’t fly itself. It needs a crew of 16—including a five-man relief crew—to keep it airborne. Convair is now building the B-58 supersonic bomber—a faster and different type intercontinental ship than the B-36. It, too, will be piloted.

In commercial aviation, the trend toward pilotless aircraft is far less evident than in other areas. In the first place, few indeed are the passengers who would travel in a pilotless aircraft Even if—in years to come—he only sits in the cockpit for the purpose of monitoring automatic equipment, Joe Pilot will be there. Safety factors as well as psychological ones will demand his presence.

Robot air cargo carriers are perhaps the farthest off of all pilotless planes. The payload sacrificed through the presence of the pilot and co-pilot is negligible when compared with the tremendous cost of the complex electronic brains needed to replace them.

The line of aviation development will, as always, follow the course directed by military and civilian customer demand and the extent of funds available for re- search, experimentation and development. Aside from guided missiles for interception and long-range use, customers have shown little interest in pilotless aircraft.

It will be many decades before electronic devices are as reliable and tamper-proof as our old, familiar friend, Pilot Joe.

A tube blows or a relay burns out. It happens. Then your robot bomber misses its target. A tiny switch fails for a split-second and the pilotless transport or cargo ship refuses to land—until, fuel exhausted, it plummets to earth. An electric impulse goes haywire—a multimillion-dollar ship or a vitally-important weapon nosedives into the ground.

It will be a long time before even the miraculous advancements in electronics approach levels of human skill and resourcefulness. Until this happens, the human pilot cannot become obsolete!