Popular Mechanics
Issue: Sep, 1934
Posted in: General, Nautical
Tags: hoaxes
No Comments on Is there a Sea Serpent? (Sep, 1934) 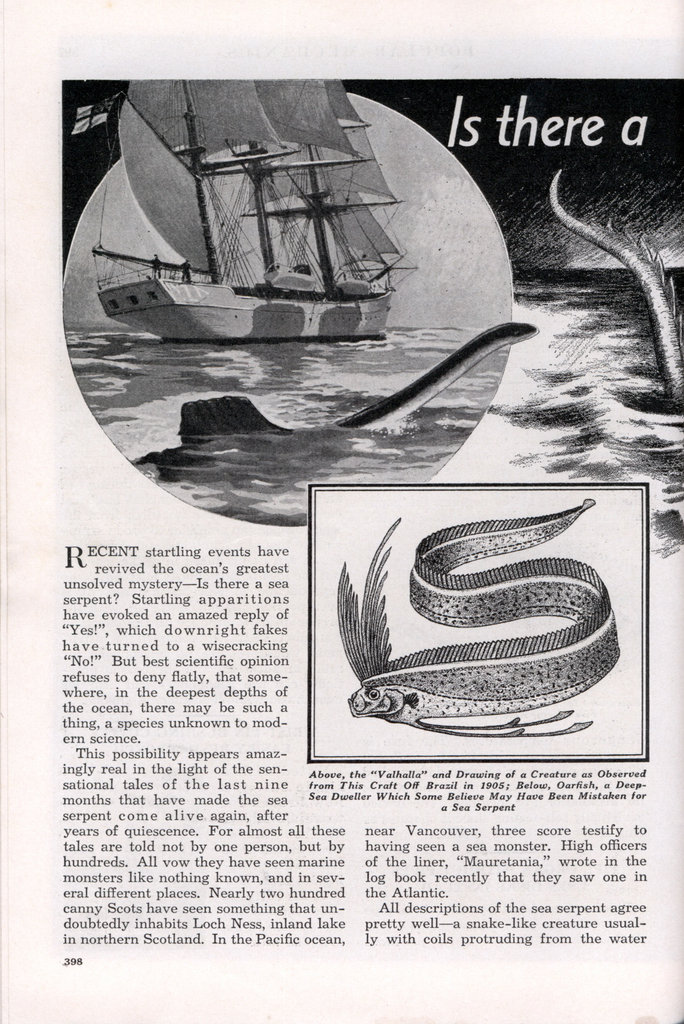 Is there a Sea Serpent?

RECENT startling events have revived the ocean’s greatest unsolved mysteryâ€”Is there a sea serpent? Startling apparitions have evoked an amazed reply of “Yes!”, which downright fakes have turned to a wisecracking “No!” But best scientific opinion refuses to deny flatly, that somewhere, in the deepest depths of the ocean, there may be such a thing, a species unknown to modern science.

This possibility appears amazingly real in the light of the sensational tales of the last nine months that have made the sea serpent come alive again, after years of quiescence. For almost all these tales are told not by one person, but by hundreds. All vow they have seen marine monsters like nothing known, and in several different places. Nearly two hundred canny Scots have seen something that undoubtedly inhabits Loch Ness, inland lake in northern Scotland. In the Pacific ocean, near Vancouver, three score testify to having seen a sea monster. High officers of the liner, “Mauretania,” wrote in the log book recently that they saw one in the Atlantic.

All descriptions of the sea serpent agree pretty wellâ€”a snake-like creature usually with coils protruding from the water something like a caterpillar’s humps, dorsal fins or flippers, perhaps webbed, and a small, snake-like head. Often the “serpent” has been proved to be porpoises swimming in a line, a big seal, a giant squid, a ribbon or oar fish or some other weird, snake-like creature of the deep that is, nevertheless, known to science. But many scientists, noting the similarity in the descriptions, admit there may be a rare, separate species. Or, more astounding, that some great reptiles of early days, dwelling in slimy submarine fastnesses, may have been brought by earthquake or other upheaval to the surface.

Raymond L. Ditmars, curator of reptiles at the New York zoo, says:
“I can’t quite get myself to believe any prehistoric monster is alive today.”

Dr. Will Beebe, noted submarine explorer, said:
“I have found no relics of the past in my deep-sea work.”

Looking at a photograph of the Loch Ness “monster” Roy Chapman Andrews, American explorer, and Dr. Ludwig Heck, of the Berlin zoo, agreed that it was a killer whale and what resembled a neck and head, was its dorsal fin. Someone else said it might be a species of newt, grown enormous by some freak of nature. Still, the mystery stands: “Is there a sea serpent?”

People around Vancouver, B. C, retort, “I’ll say there is!” At the end of January, two youths named Andrews and Georgeson were at Pender island, duck shooting. A bird fell. Suddenly, up from the water thrust a horrid head, shaped somewhat like a horse’s head. The jaws seized the duck. The water thrashed. A “streamlined” body swam away. It was two feet thick, and twelve feet of it showed grayish brown.

There was one in the Caribbean, says S. W. Moughtin, senior first officer of the great “Mauretania,” on January 30. On the blue water curved a shiny jet-black, snake-like body, six feet thick and sixty-five feet long. The head was only two feet across. The third officer also saw it. Together the officers vouched for an entry in the ship’s log: “Sighted sea monster headed S.W.; 1:20 P.M.” Obviously there arises the question: Is there a sea serpent?

If not, who can cast light upon this occurrence of the dark night of February 15, 1934. The freighter, “Pecos,” was riding the swells of the Gulf of Mexico. Suddenly, came a jolt. The ship trembled. “Something hanging on our bows, sir,” the lookout told Captain L. Baker. In a flashlight’s spot, Captain Baker saw “something” athwart the bows. It was grayish brown, spotted, thirty to forty feet long, and five to six broad. It did not move. The ship reversed, and it dropped off, sank quickly and silently. Dr. E. W. Gudger of the American Museum of Natural History says it may have been the rare whale-shark, but he is not sure. Nor is Captain Baker.

“But science has neither bones nor hide of such a creature to work on,” says Dr. Charles Haskins Townsend, director of the New York aquarium. “People who report them at sea are usually victims of faulty observation. Once, when I was aboard the U.S.S. ‘Albatross,’ off Mexico, I was excitedly called to behold a sea serpent. There was a large creature on the water’s surface, making a great splashing. Naval officers hailed it as a sea serpent. Actually, it was a humpback whale, finning. These whales like to roll on the surface of the water, their eleven-foot fins striking the surface. That’s all.”

But no such explanation seems to cover certain remarkable occurrences of the world war, told by numerous capable naval officers and men, German and British. Baron Von Forstner, of the submarine, “U 28,” tells how on July 30, 1915, in the North sea, he torpedoed a British freighter. The ship was sucked into the depths, and beneath the surface exploded. A geyser of water spurted up. In its midst, fifty feet into the air, shot something that looked like a giant crocodile. It had legs, â€¢ with webbed feet. It wriggled and twisted as if in pain. With a great splash, it fell back again into the water, and disappeared. From the submarine’s deck, six men saw this, and agreed upon a drawing and entry in the log book.

A little less than forty years ago, occurred the greatest of modern American sea-serpent scares. This one was said to inhabit Lake George, in the Adirondack region of New York. One summer it almost frightened away everyone. Out on the lake these people said they saw, bobbing up from the water, the neck and head of a horrid creature. It had a gaping mouth, two sharp, protruding ears, great teeth, and large and baleful eyes.

It reappeared just recently in the New York Sun. The veteran reporter, Martin Green, disclosed that the Lake George monster had been a gigantic hoax. The horrid head and neck had been a large cedar log, carved and painted, and pulled through the water by invisible ropes.

Yet, despite all the fakes and the mysteries, there are sea serpents. Also, they are deadly. There are the Hydrophiinae, poisonous snakes that swim the ocean, usually the Pacific off Lower California and Mexico. They are six to eight feet long and swim in large schools. Frightful tales are told of swimmers finding themselves surrounded by one of these schools. There is also a serpent that is sometimes swept from the Orinoco river of South America, down to the sea, eventually reaching the swamps of Trinidad. Some are twenty feet long. So, whether or not there are unknown species of sea serpent, the known ones are formidable enough.