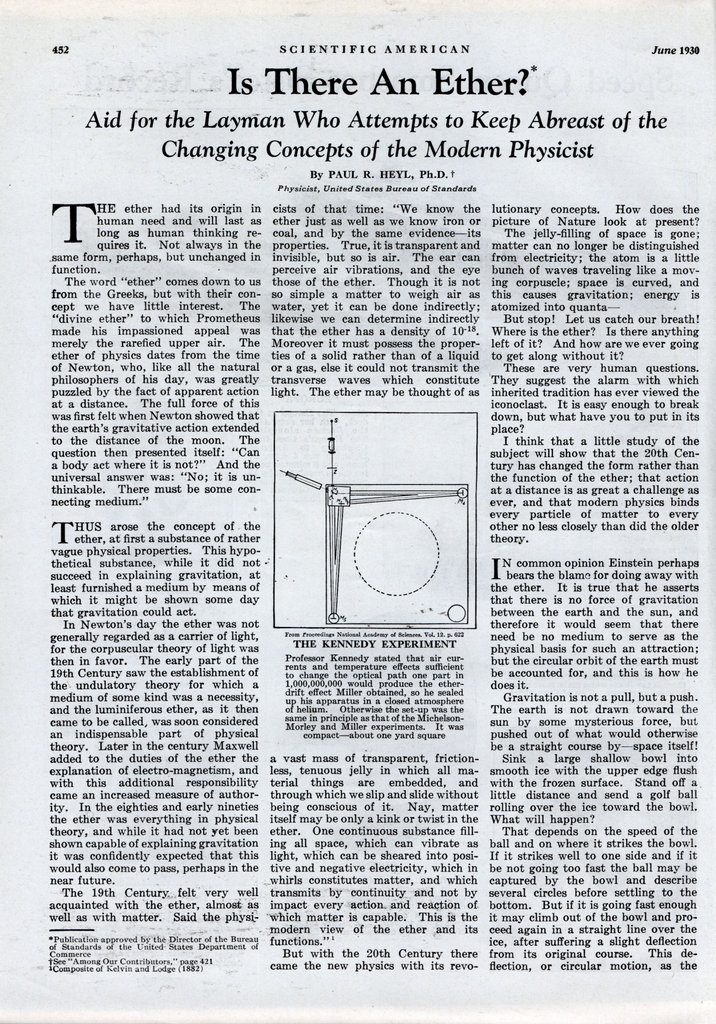 Is There An Ether?

THE ether had its origin in human need and will last as long as human thinking requires it. Not always in the same form, perhaps, but unchanged in function.

The word “ether” comes down to us from the Greeks, but with their concept we have little interest. The “divine ether” to which Prometheus made his impassioned appeal was merely the rarefied upper air. The ether of physics dates from the time of Newton, who, like all the natural philosophers of his day, was greatly-puzzled by the fact of apparent action at a distance. The full force of this was first felt when Newton showed that the earth’s gravitative action extended to the distance of the moon. The question then presented itself: “Can a body act where it is not?” And the universal answer was: “No; it is unthinkable. There must be some connecting medium.”

THUS arose the concept of the ether, at first a substance of rather vague physical properties. This hypothetical substance, while it did not succeed in explaining gravitation, at least furnished a medium by means of which it might be shown some day that gravitation could act.

In Newton’s day the ether was not generally regarded as a carrier of light, for the corpuscular theory of light was then in favor. The early part of the 19th Century saw the establishment of the undulatory theory for which a medium of some kind was a necessity, and the luminiferous ether, as it then came to be called, was soon considered an indispensable part of physical theory. Later in the century Maxwell added to the duties of the ether the explanation of electro-magnetism, and with this additional responsibility came an increased measure of authority. In the eighties and early nineties the ether was everything in physical theory, and while it had not yet been shown capable of explaining gravitation it was confidently expected that this would also come to pass, perhaps in the near future.

The 19th Century, felt very well acquainted with the ether, almost as well as with matter. Said the physi- cists of that time: “We know the ether just as well as we know iron or coal, and by the same evidence—its properties. True, it is transparent and invisible, but so is air. The ear can perceive air vibrations, and the eye those of the ether. Though it is not so simple a matter to weigh air as water, yet it can be done indirectly; likewise we can determine indirectly that the ether has a density of 10″18. Moreover it must possess the properties of a solid rather than of a liquid or a gas, else it could not transmit the transverse waves which constitute light. The ether may be thought of as a vast mass of transparent, friction-less, tenuous jelly in which all material things are embedded, and through which we slip and slide without being conscious of it. Nay, matter itself may be only a kink or twist in the ether. One continuous substance filling all space, which can vibrate as light, which can be sheared into positive and negative electricity, which in whirls constitutes matter, and which transmits by continuity and not by impact every action, and reaction of which matter is capable. This is the modern view of the ether and its functions.”‘ But with the 20th Century there came the new physics with its revo- lutionary concepts. How does the picture of Nature look at present?

The jelly-filling of space is gone; matter can no longer be distinguished from electricity; the atom is a little bunch of waves traveling like a moving corpuscle; space is curved, and this causes gravitation; energy is atomized into quanta— But stop! Let us catch our breath! Where is the ether? Is there anything left of it? And how are we ever going to get along without it?

These are very human questions. They suggest the alarm with which inherited tradition has ever viewed the iconoclast. It is easy enough to break down, but what have you to put in its place?

I think that a little study of the subject will show that the 20th Century has changed the form rather than the function of the ether; that action at a distance is as great a challenge as ever, and that modern physics binds every particle of matter to every other no less closely than did the older theory.

IN common opinion Einstein perhaps bears the blame for doing away with the ether. It is true that he asserts that there is no force of gravitation between the earth and the sun, and therefore it would seem that there need be no medium to serve as the physical basis for such an attraction; but the circular orbit of the earth must be accounted for, and this is how he does it.

Gravitation is not a pull, but a push. The earth is not drawn toward the sun by some mysterious force, but pushed out of what would otherwise be a straight course by—space itself!

Sink a large shallow bowl into smooth ice with the upper edge flush with the frozen surface. Stand off a little distance and send a golf ball rolling over the ice toward the bowl. What will happen?

That depends on the speed of the ball and on where it strikes the bowl. If it strikes well to one side and if it be not going too fast the ball may be captured by the bowl and describe several circles before settling to the bottom. But if it is going fast enough it may climb out of the bowl and proceed again in a straight line over the ice, after suffering a slight deflection from its original course. This deflection, or circular motion, as the case may be, does not mean that there is any force of attraction originating at the center of the bowl; the curved path is caused not by a pull but by a push of the curved surface of the bowl against the moving ball.

In a similar manner Einstein says that the motion of the earth in a circular orbit is due to a push from curved space, and that this curvature of space is caused by the mass of the sun. According to Einstein, space is not mere emptiness, but a sufficiently robust entity to be curved and to deflect the earth. It is this very resistent space itself that forms the bond of union between the sun and the earth and relieves us of the necessity of assuming action at a distance.

RATHER a neat substitute for the . ether, is it not? We need no medium filling all space if space itself is capable of doing the trick. And after all, whether we spell the connecting medium E-T-H-E-R or S-P-A-C-E— what does it matter?

Let us now look at the latest concept of the atom. I do not mean the Bohr atom, though to many this attractive planetary concept still represents the 20th Century idea. The readers of the Scientific American know that the Bohr atom has for some time been superseded by a more powerful and plastic form—the wave atom of Schodinger. According to this concept an atom is a little bunch of vibrant energy, spreading out in all directions and thinning as it goes, so that all atoms are connected, though rather tenuously, into one great vibrating system. And what is it that vibrates? Electricity.

Schrodinger assumes a filling material in space, a universal electric plenum which in vibration constitutes matter. Here we see again our old friend the ether in a new disguise. There is no escaping it. Scientific thought demands it and inventiveness supplies the demand under a different form suitable to the changed times. The ether is indeed protean in its properties, all things to all men. From the vague, imponderable medium of Newton’s day we have come by way of the tenuous jelly of the 19th Century to the curved space of Einstein and the universal electric plenum of Schrodinger. In one form or another the ether will last as long as human thinking requires it.

But, then, is the ether nothing more than a logical proposition? What does experiment say? Can it give us no evidence of the ether as a physical reality?

Apart from the ever present evidence of our sense of sight and the stars of heaven there is no evidence available. Many times has the attempt been made to detect the ether by^our motion through it, but to no avail. Not one but several independent lines of evidence concur in this negative answer.

But, you may say, is there riot at least one positive result—that of Miller? And does not the evidence of one skilled observer who has seen an elusive phenomenon count for more than the negative testimony of the many who have failed to notice it? This is often true, but it happens that in this case the presumption is exactly the other way. The well known Michelson-Morley experiment is carried out by means of interfering light waves. The adjustment is one of extreme delicacy, difficult to obtain and to maintain. It is a very easy thing to get an apparent positive result and a very difficult thing to avoid it. It is a matter of wonder and admiration on the part of those who know the ropes that Michelson and others should have been able to reach their negative conclusions.

For there have been others. Miller’s first announcement stimulated a number of experimenters in Europe and in this country to repeat his experiment Under different conditions, some in a balloon, some on a mountain, and some on earth at sea level, and in no case was any confirmation of Miller’s result reported. Of all these other experiments those of Kennedy, of California, have perhaps had most weight with physicists. Kennedy succeeded in reducing the dimensions of the classical Michelson-Morley apparatus to a relatively small volume, and by a very ingenious optical device preserved all the sensitiveness of the larger form. He was therefore able to enclose his apparatus in a case filled with helium, thus obtaining unquestioned control of pressure and temperature. And his result was negative.

EXPERIMENTERS of the first rank have more than once been self deceived. There will be recalled the case of Ramsay, one of the best chemists of England, and a co-discoverer of argon. Soon after the discovery of radium it was found that radium emanation gradually turned into helium. This was the first recognized case of transmutation among the elements, and aroused great interest. Ramsay, as a result of some very carefully conducted experiments, came to the conclusion that not only helium but neon could thus be produced, and that even copper could be changed into lithium. Other experimenters failed to confirm Ramsay’s results, and it took five years to settle the question. Finally J. J. Thomson developed the unexpected fact that certain gases were retained by glass under the most severe treatment, such as heating to the softening point. Ramsay’s alleged results are now of historical interest only.

And so it is with the supposed “anti-Einstein” evidence today. Miller’s results stand alone. Without independent confirmation they can not gain acceptance. Half a dozen attempts at confirmation have failed, and their very failure is the best proof of their claim to recognition.