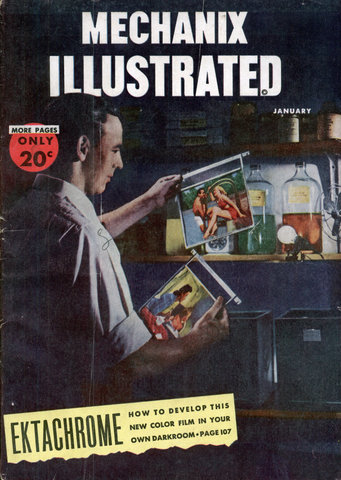 Here it is... the clinical recording camera. Developed by the Army Signal Corps for the surgeons of the Medical Department, it can "stop" an intricate operation with a silent, built-in flash lasting 1/25,000 of a second!
Butyl 'n Beauty

on display at left herald a new style automobile inner tube designed to prevent the rapid deflation of air in the event of a puncture. Waffle-like construction causes a squeezing action around nail holes. Butyl is a synthetic rubber which retains air better than the natural product. The beauty—not synthetic—is Rae Caldwell.
Have you considered a career in PLASTICS?

A job with a promising future goes a long way toward making you happy — at work and at home. Do you know of the fine opportunities for advancement that are available in the plastics industry? Do you want to share in the development of a great new plastics era? Trained men, who have plastics know-how, will fill the well-paying positions in the industry. If YOU want to be one of them act NOW to prepare yourself.
Teleran = Television + Radar

TWO marvels of the electron tube, radar and television, have now been joined to give eyes to the air pilot at times when he would otherwise be flying blind through fog, clouds or darkness.
NAVY tackles Mt. Everest

In an epochal 30-day experiment the Navy "climbed" two men "higher" than Mt. Everest—without oxygen. By CAPT. J. H. KORB, U.S.. Navy Medical Corps, as told to Jamea Kevin Miller SCIENCE now has proved that flyers and mountain climbers can reach altitudes of almost six miles, remain normal and alert, and come away none the worse for wear—without supplemental oxygen. It is only necessary that they accustom themselves gradually to the decreasing pressures and dwindling oxygen.
Midget Radio

Midget Radio, left, is tuned in by an official guide at the Victoria and Albert Museum in London where it was one of 6,000 items in the “Britain Can Make It” Exhibition. It costs about $70.
Candid Pickups

IF YOU don't think amateur recording is tun, just ask Johnny Olsen. radio papa of "Ladies, Be Seated." He's been having a picnic with his home recorder for years. You don't have to stay home with them, either.
DOWN GOES PICCARD!

DOWN GOES PICCARD! Yea, he’ll go down four miles BUT… will he come back up? THE African sun slants its dawn rays across the Gulf of Guinea. From the deck of a ship a huge crane swings out over the water. Slowly it descends and with scarcely a ripple deposits the amazing thing on the […]
What's ahead?

A world of rapid changes and new economic problems, that's certain. Just as surely, however, there's one thing that will be unchanged. In the near future and the long future, the important positions will be held by trained men. You want security for your family... freedom from financial worry ... your own home . . . perhaps your own business. The surest route to them is specialized training that pays out in promotions and increased income.
Mobile Plastic Eye

Mobile Plastic Eye that moves in coordination with the wearer’s good eye is held at left by Fritz Jordan who developed it in association with Dr. A. D. Ruedemann, chief eye surgeon of the Cleveland Clinic. Mobility is obtained by sewing the eye muscles to a mesh of tantalum metal covering the back of the […]
"Electric Bike"

“Electric Bike” above boasts a dynamo which stores energy while traveling downhill and releases it to provide power for climbing up grades. It was another of the 6,000 products exhibited at the “Britain Can Make It” show and was designed by B. G. Bowden.
PRINT ANY PHOTO ON PAPER, CLOTH, LEATHER OR WOOD

SIMPLE, EASY TO USE Magic liquid takes only 2 minutes to reproduce any snapshot on to stationery, handkerchiefs, ties, scarfs, etc. Use same picture over and over again if you wish. Won't wash off. Won't harm negative or fabric it's used on. Personalize your belongings!
Hydraulic Leg

I have two hypothises for this picture. Either The Nazis were almost successful in creating an army of cyborg stormtroopers to take over the world, or somewhere on the back of the picture it says “Property of Fritz Lang.” (In German, of course). Hydraulic Leg designed to give amputees the knee action essential in climbing […]
Hottest Thing in Industry

BY LESTER DAVID STOCKY John Bulkeley showed the world what a P-T boat could do to a jap warship and the United States Navy was sold solid on the little torpedo sling-shots. Messages clattered from the Pacific to the Pentagon in those early days of the war with Japan: "Give us P-T boats," the Admirals cried. War production chiefs swung into action. Orders, triple-stamped with the highest priorities, whirled through the topmost echelons and shot out to the shipyards. Builders rolled up their sleeves and went to work. The Navy waited impatiently. Time passed, the Japs swallowed up, island after island in their seemingly inexorable sweep and again the admirals flashed Washington:
Electrons Go To Bed

NO MORE clammy sheets. No more ice in the bed. No more flannel pyjamas. No more cold feet. No more midnight shivers looking for more covers. No more! The Electronic Age has produced the Electronic Blanket. The electronic blanket looks like an ordinary woollen one of good quality, but hidden inside there's a pair of flexible wires that go up and down and all around. One is a warming element, the other a temperature "feeler" that governs the degree of warmth of the blanket. Operation is automatic, through a small bedside control.
Airplane House

Airplane House at right solved the dwelling shortage for E .H. Kantz of Dallas, Tex. He built it from an old A-10 fuselage, an ancient Cadillac chassisâ€”which he extended 10 feetâ€”and a Ford V-8 engine. It won’t fly, but you ,get the sensation of landing an airplane when you buzz along at 50, he says.
Gimmicks for Clowns

Rocket-Cycle Explained by Professor A. M. Low of London while Alec Jackson gets ready to take-offâ€”along the surface, he hopes. Low has been experimenting with rockets since 1917. Four of his rocket-assisted motorcycles were demonstrated at the Wembley speedway meet.
Toe Preview

Toe Preview will eliminate guesswork when salesmen fit kiddies’ shoes with master sizes made with transparent vamps of Vinylite. Developed by Step Masters, they’re supplied to dealers in full sets of half sizes. Vinylite is Bake-lite’s name for transparent vinyl plastic.
How Good Are the Foreign Cars?

Endlessly people keep asking. "Why are the foreign cars better than ours?" Here is the true dope. BY TOM McCAHLL WHICH are really the best?" I've often been asked, "American or foreign automobiles?" And readers have written and asked flatly, "Why is it we can't build as good cars as they do in Europe?" If you have been around automobile enthusiasts, you know that arguments on this subject have been going on for over 30 years. There is only one truthful answer when asked if imported cars are better than ours, and that is, "Yes and no." I will explain. I have never felt more qualified to write any article than I have this, because I don't believe any one in this country has ever, over a period of years, personally owned more imported cars of various makes than I have, in addition to owning cars made by every leading manufacturer in this country.
Weird Jailhouse Art

I’m not really sure how this would discourage drinking…. Never Again swear drunks who wake up in the Galena, Ill., jailhouse. For there in front of their eyes is the gosh-awful biggest snake they ever saw. Ana wrapped around a pink elephant, too. Jailer George Herman says the scheme may not be scientific, but it […]
Pinwheel Bus

Time-killing bus rides from airports to cities will soon be quick hops in ten-place copters. FROM the window of the airliner, you look down upon the city of your destination. The plane turns with deceptive lazinessâ€”you're moving at a rate of almost 200 miles per hourâ€”and approaches the field. Minutes later you step to the ground. Ah, the wonders of flying. The two cities are 200 miles apart. You've gone from one to the other in a little over an hour.