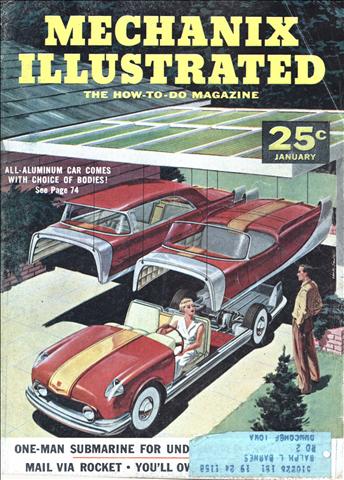 Interchangeable bodies on a low-slung chassis make this a real all-purpose vehicle. By Chuck Smith ALMOST every time a family goes out to buy a new car the same husband-and-wife argument comes up. He wants a snappy sports job that bowls along at 100 per, while she demands a nifty station wagon that will carry half the neighborhood. Sometimes the answer is two cars but oftener you just make do with one boat that is pretty good at a lot of things but outstanding at nothing, so three years ago I got an idea for a car that would solve all such problems, a true all-purpose vehicle which not only looks like but is several different cars. The secret is interchangeable bodies that fit one universal chassis and can be changed quickly. MI now presents the result of my design project as the Multicar.
MAIL VIA ROCKET

A missile expert predicts rocket mail by 1965. Here are MI's ideas on how the system could function. By Frank Tinsley IT'S Friday noon. In the home office of a giant New York corporation the final drafts of a secret merger are being signed. If they can be signed by the party of the second part in San Francisco and be back here in the office before the stock market closesâ€”so that "buy" orders can be rushed to dealers throughout the countryâ€”a possible Monday financial slump can be averted. The atmosphere is tense. A micro- photo machine has been moved into the president's office and a trusted operator inserts the sheets, one by one. Two tiny prints of each emerge, one for the files and one for mailing.
You'll Own "Slaves" by 1965

The robots are coming! When they do, you'll command a host of push-button servants. By O. O. Binder IN 1863, Abe Lincoln freed the slaves. But by 1965, slavery will be back! We'll all have personal slaves again, only this time we won't fight a Civil War over them. Slavery will be here to stay. Don't be alarmed. We mean robot "slaves." Let's take a peek into the future to see what the Robot Age will bring. It is a morning of 1965. . . You are gently awakened by soft chimes from your robot clock, which also turns up the heat, switches on radio news and signals your robot valet, whom you've affectionately named "Jingles." He turns on your shower, dries you with a blast of warm air, and runs an electric shaver over your stubble. Jingles helps you dress, tying your necktie perfectly and parting your hair within a millimeter of where you like it, Down in the kitchen, Steela, the robot cook, opens a door in her own alloy body and withdraws eggs, toast and coffee from her built-in stove. Then she dumps the dishes back in and you hear her internal dishwasher bubbling as you leave for the garage.