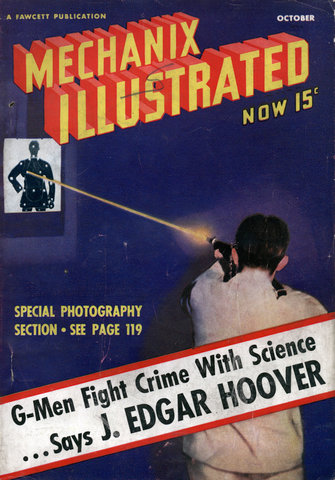 All those Arquettes in Hollywood are this guys grandchildren. Actor Invents Rubber Movie Masks LIVE rubber masks which J may revolutionize the art of make-up in motion picture horror roles have been developed by Cliff Arquette, radio and screen actor, who is known as the “man of a thousand hobbies.” The inventor says the masks […]
Postage Stamps as Propaganda

by MONTGOMERY MULFORD THERE is no doubt that today postage stamps are being used for propaganda purposes. Because they serve governments in this way, new stamps are constantly being issued. Each year many new issues appear, and a vast majority of them suggest or preach, some political ideal.
Gyro Wheel Is Novel "Boat"

Gyro Wheel Is Novel “Boat” A NOVEL aquatic gyro wheel by means of which he propels himself over the water by rolling over and over has been constructed by H. Schulze, of Hanover, Germany. The wheel is built of wood and light metal.
G-MEN Fight Crime With Science - Hoover Interview

J. Edgar Hoover tells how science penetrates the dark corners of criminality to reveal solutions not before known in law enforcement. by Stanley Gerstin an interview with J. Edgar Hoover ON AUGUST 16, 1937, two men and a woman were sitting in an automobile in a remote section of the Chickamauga â€” a national military park in Georgia. Suddenly one of the men crashed an automobile crank over the head of the other and as the victim slumped, a pocket knife flashed and the sharp blade sank again and again into the bleeding body of the stunned man. In an effort to dispose of the car, it was set on fire in Chattanooga, where the partly destroyed machine was found the next day by authorities. On the same day that the mutilated body of the victim, James C. Revels, was found, Roy Weathers and his wife. Virgie, were picked up by authorities for questioning, and on August 21, they admitted the crime which they later repudiated in part. In the subsequent investigation conducted by the Federal Bureau of Investigation, the Bureau's crime laboratory established that soil picked up at the scene of the murder contained human blood. The clothing of the defendants and the automobile crank were also shown to contain blood and the pocket knife fitted rents in the victim's clothing. Minute bloodstains were found on parts of the automobile, in spite of its burned condition, and this evidence resulted in the conviction of the defendants.
Sweat Band Helps (Handsome) Workers

For some reason this picture reminds me of the “asian” upstairs neighbor in Breakfast at Tiffany’s. Can’t you just see him yelling “Miss a Go Rightry I core a da poreece!” Sweat Band Helps Workers A SWEAT band designed for use by workers who wear goggles is said to thoroughly absorb forehead perspiration, preventing clouding […]