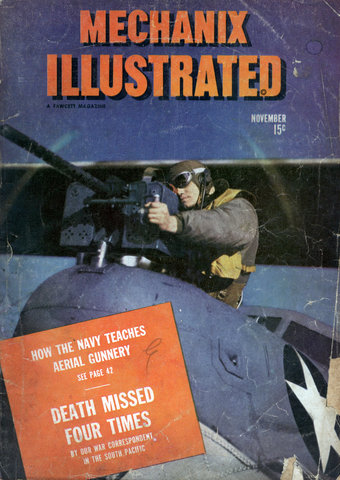 Aluminum Attraction THE well-filled sweater shown in the picture at right, designed for use with evening dress, is made of a new material— aluminum yarn, colored to resemble gold. Production of this yarn is limited to the small amount necessary for experimental purposes, is expected to remain so until after the war, when it will […]
DECEIVE YOUR SENSES

DECEIVE YOUR SENSES by Roy Lester SEEING isn’t always believing. Nor is smelling, feeling, hearing or tasting. Your senses, as a matter of fact, are pretty gullible. They go, hook, line and sinker, for any number of tricks. On these pages are a few simple methods by which you may prove to your own satisfaction […]
Mister-you're getting paid in DYNAMITE!

Our pay envelope today is dynamite. The wrong way to handle it is for us to wink at prices that look too steep . . . telling ourselves we can afford to splurge. We can't afford toâ€”whether we're business men, farmers, or workers. And here's why: Splurging will boost prices. First on one thing then all along the line.
William B. Stout and his Wonderful "SKYCAR"

by J. A. Greenberg BILL STOUT, the genius of Dearborn, Michigan, has been responsible for more revolutionary innovations in the design and construction of automobiles and airplanes than has any other man, living or dead. Yet he has found time to create such minor novelties as the first gasoline-driven railroad car, the first Diesel-electric streamlined train, a streamlined motorbus lighter and faster than any then manufactured, a brick conveyor which saved thousands of dollars in building construction, an improved theater seat, an air-conditioned bed, and, among other things, a staggering number of mechanical toys. He has been credited with more technical inventions than any man since Edison.