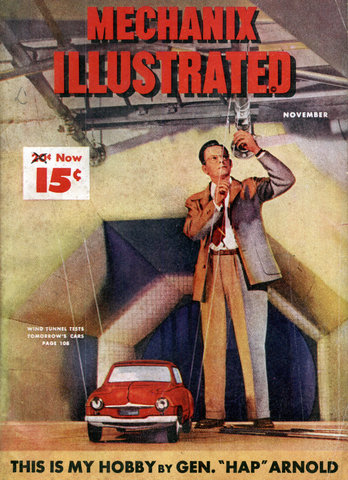 THE front seats of the jeep are tolerably comfortable, but the shallow, flat rear seat is a notorious back-breaker. It can be improved considerably by installing two pieces of1/2in. plywood, (photo 1, above right), hinged to the bottom of the seat frame. Position the back board to about the angle shown. To the front of the bottom board, attach short wooden feet (photo 2, right) about 10 inches long. The back board can be pushed forward, (photo 3, below) to give access to the hand crank mounted against the rear wall of the jeep.
Back Your Future with U.S. Savings Bonds

Wow. Back Your Future with U.S. Savings Bonds
HOW ABOUT TOOTH BANKS?

Dental scientists are working on a new boon to mankindâ€”the transplantation of live teeth. BY LESTER DAVID SQUINT for a moment into the crystal ball labeled "Dental Science's Coming Attractions." Here's the image: Sorrowful-looking gent shuffles into dentist's office, points miserably to aching molar, sits down and opens wiâ€”ide. Dentist gives him the needle, inserts forceps, yanks mightily. He throws away old tooth and goes to cabinet for new one. He selects nice, shiny molar from collection, plants it in patient's mouth and sends him on his way. About a month or so later, new tooth has established nerve, bone and blood vessel connections with jaw and happy patient has a live, serviceable chomper in his head to replace the one extracted.
"Look! Real SMOKE! Real Railroad Whistle!"

Hey, fellows!-don't miss the LIONEL catalog and Sound Effects Record Sure!â€” you're going to build a model pike of your own! Sure! you're going to have LIONEL locos and rolling stock, because ONLY LIONEL gives you power plus realism! Only LIONEL locos puff real smoke with action of driving rods) Only LIONEL Locos have built-in real R.R. whistle! And to build a real pike get the LIONEL
Grow Up, Railroads!

BY JACQUES MARTIAL THE year 1869 was a fateful one in the history of railroads. It was during that year that George Stephenson won the "Battle of the Gauges'' over his opponent Brunei, the famous engineer of the Great. Western Railways. This "victory," which decided in favor of the narrower gauge of 4 feet 8-1/2 inches, was a fundamental error. From it stem practically all the ills of the present-day railroads. Greater speed, cost of operation, volume, comfort, loads, economyâ€” every possible progressive step needed today is prevented by the initial shortsighted decision won by Stephenson. History is not clear as to how the odd figure of 4 feet 8-1/2 inches was arrived at. Some say it was based upon the distance beteen the Romans' wheel ruts. Others claim that Stephenson simply found it in the distance between the wheels of his own cart.
Jivin' Up THE JEEP

THE front seats of the jeep are tolerably comfortable, but the shallow, flat rear seat is a notorious back-breaker. It can be improved considerably by installing two pieces of 1/2 in. plywood, (photo 1, above right), hinged to the bottom of the seat frame. Position the back board to about the angle shown. To the front of the bottom board, attach short wooden feet (photo 2, right) about 10 inches long. The back board can be pushed forward, (photo 3, below) to give access to the hand crank mounted against the rear wall of the jeep.
Mechanical "Lobster"

Deep undersea the claws of this tank will rip to the heart of rotting treasure ships. THERE'S gold down on the ocean floor. Vast fortunes lie hidden in sunken caches, waiting the hand bold enough to stretch down through the dark pressure-packed waters and bring them to light. Now, with the new ultramodern equipment becoming available, treasure expeditions may become big business. Treasure salvors know the authentic accounts of divers who have recovered immense treasure from sunken galleons, and know too of numerous other sunken craft that still retain great wealth within their rotting hulks. I myself have salvaged many sunken vessels, bringing to the surface much treasure; I, too, have attempted to recover some of the Spanish treasure that remains beneath the Silver Shoals, off Haiti; and I have walked in the sunken city of Port Royal, the fabulously wealthy "Pirates' Babylon" off Jamaica.
Little Cars Come First

New cars don't jump from drafting board to production line. Models of numbers of variations are built, a choice made, and all details studied. TEN years or so ago when the auto industry first began serious experimentation with the streamline, designers discovered that the drawing board was no longer a reliable instrument of the trade. The compound metal surfaces brought on by long, sweeping fenders, arched roofs and built-in luggage compartments gave off tricky highlights. A car model that appealed in the two-dimensional plane of the sketch might have an entirely different appearance in three-dimensional bulk. Frequently, too, the difference did not become forcibly evident until production jobs were exposed to the critical lights of a salesroom.
Dry Ice-Capades

Dry ice is very interesting stuff! Get yourself a chunk (handling it with gloves) and perform the simple experiments illustrated here. DRY ice is solid carbon dioxide. It's very interesting stuff. For one thing, it sublimes at room temperature; that is, although a solid, it evaporates to form a gas without passing through the liquid state. The mist you see formed by dry ice is water "squeezed" out of the air because it has been chilled below the dewpoint.
WATER WINGS of PLASTIC

The old-fashioned water harness has been outmoded by gayly colored swimming aids. BY DON ROMERO A MAN, a boy, and a girl walk to the edge of a swimming pool, dive into the water, swim the full 75-foot length of the pool, climb out at the other end, and briskly follow each other off the three-foot-high springboard, each slicing into the water in a dive which cuts the surface like a knife. What's so remarkable about this? Nothing except that the man is a war veteran whose entire right arm and lower left leg are missing, the girl is a tiny tot who is not quite four years old, the boy is a 10-year-old who has been a victim of severe spastic paralysis since he was a baby. And until three weeks before not one of these people had ever swum a stroke in his life.