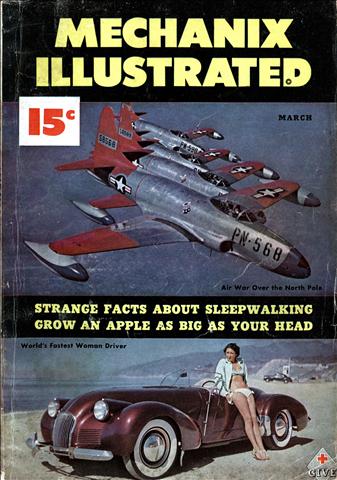 NO WINDING RUNS FOR HOURS A Collectors Item! A scale-model car that will bring exciting joy to any child (and grownups, too). It is packed with fun and instructive play—Just put it in gear and away it goes—in low, second, high — touch it and it goes in reverse.
Hollywood Star Chaser

Tired of being a fall guy for films, this stunt man got on the phone and called up a fortune. By Carl Crawford MAYBE I shouldn't admit it, but I got my big money-making idea right after falling downstairs on my head eight times in a row. Frankly, I don't recommend such tumbles to anyone seeking inspiration for a novel business venture. I was a stunt man in the movies at the time and took those eight falls downstairs as a professional daredevil. That afternoon, when I was wearily picking up my battered bones, I heard the director hailing an actor who'd just come on the set: "Where the devil were you this morning, Joe? I had a nice, little part for you—four days' work at 60 bucks a day. But when the studio couldn't find you, I had to get somebody else."
NEW in SCIENCE

Our planes are waging a relentless battle to conquer polar cold and guard America against sneak attacks across the world's roof. By Major General K. P. McNaughton, U. S. Air Force FOR nearly four centuries the Arctic defied the hardiest explorers from the temperate zones. This vast ice-locked world with its midnight sun, Aurora Borealis and paralyzing cold has been an impregnable barrier across the shortest route between the East and West.
I Walked Through FIRE

By Wilmon Menard That red-glowing pit on the South Sea island fascinated the author. He never thought he'd be lured into the flames. "YOU'RE going to be sorry!" shouted one spectator as I kicked off my shoes and stood before the fiery pit. A moment ago I had been just a sightseer standing among the spectators gathered in a sacred grove on the South Sea island of Raiatea to witness a strange fire-walking ceremony. Now I was feverishly getting ready to walk barefooted through the fire myself.
Charles Addams: Car-toonist

THE day that Charles Addams drew the strange skiing cartoon at the left he became famous. That ski sketch even became a test for insanity—if you could see nothing wrong, the keeper had a nice padded place for you. But the day for Charlie was the one a year ago when Playwright Philip Barry gave him a beat-up Mercedes-Benz.
Paste-Pump Toothbrush

A MISSING tube of toothpaste helped Dr. L. E. Walker, a Mullen, Neb., dentist, invent a toothbrush that always had the paste handy—packed right in the handle. Dr. Walker's office was full of professional equipment for taking care of other people's aching teeth. At home, though, it was another story. When he had to clean his own grinders, he found his toothbrush all right—but where was that wandering tube of paste?
World's Fastest Woman Driver

NEXT time you feel the urge to yell "Woman driver" at that car in front of you, think it over. It might be Mrs. Richard L. Winton, one of the world's greatest woman drivers. In her hot rod, "Drool," the decorative Mrs. Winton (see photo above) has been officially clocked at 126 mph! Her sleek speedster is actually a 1941 Mercury hopped-up by Mel Ord, the famous race-car builder. He also designed the body which Frank Kurtis executed and constructed. Before it was finally completed the model cost over $10,000.
Madman MORAN - Screwball Promoter

THE man is mad! He spends his time on crazy projects like the ones shown in these pictures: (1) Getting half-baked by exposing half his body at a Florida beach to test its sunshine against California's supercolossal rays; (2) personally hatching an ostrich egg; (3) finding a needle in a haystack—he sifted two tons of hay for 82-1/2 hours before he spotted the thing, and (4) riding across a river near Reno in an Uncle Sam outfit to prove that any American can change horses in midstream.
Strange Facts About Sleepwalking

By Carlton Brown Like the man who awoke to find himself drowning in a river, you may roam the dark with 4 million other somnambulists—and never know it. THE pretty young woman was the strangest case Dr. Dyce of Aberdeen, Scotland, ever saw. She was straddling a stool in the kitchen and riding it around the floor like a hobby horse. As she galloped the stool, she urged it on with frantic cries and whipped the wooden legs with one hand, just as though she were on a live mount.
dream cars you'll never see

IN the January MI we showed you Tom McCahill's dream car. And it really caught your fancy. We were swamped with letters, many of which longingly described pet dream cars. So, the editors asked artist Doug Rolfe to draw this set of cartoons to illustrate what might happen if Everyman would fit a car to his own personality. SPORTSMAN'S MODEL: good on land and sea. It's equipped with reds, pad' dies, elephant guns, LaCrosse sticks, fencing masks and cricket bats.
Apples As Big As Your Head!

Scientists are working frantically to produce monster plants in order to feed the world. You can try their wonder drug in your own garden. By Donald G. Cooley HOW'D you like to step out into your backyard and pick a two-pound apple? Or a strawberry as large as a peach? Perhaps you'd prefer to grow roses the size of dahlias. Or, the prospect of biting into an exotic new fruit or vegetable—a pomato or a cucaloupe—might appeal to you. There's nothing fantastic about the creation of utterly new, bigger, more flavor-some and nutritious plant foods. Nature is creating them all the time. The trouble is that nature has all the time in the world and if she takes a few million years to turn out a new kind of peach tree it's nothing to her.
Robots ARE People!

By Richard Dempewolff Modern scientists can make automatons that walk, talk, see—even think like a man. But only an 18th-century artisan created 'human9 puppets. A fantastic family lives in Neuchatel, a watch-making town hidden deep in the Swiss Alps. It's a small family—only two boys and a girl; but it has a long history. For each one of the three was born nearly 200 years ago! Despite two centuries of living, they show no signs of age and still look fresh and elegant in their fancy 18th-century costumes. One brother is an artist, the other a writer and the young lady a musician. These wonder children may keep all their endearing young charms and continue to use their creative talents for a thousand years. Neither youth nor health ever fails this remarkable family, the uncanniest members of that queer race man dreamed up—the robot people.