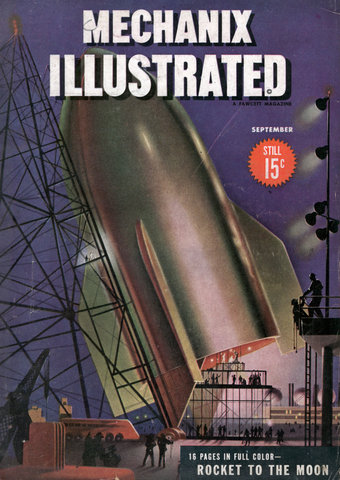 The Army has lifted the veil of secrecy from its miraculous "seeing eye." ONLY at rare intervals during the war have we heard the word, radar, mentioned and then only in a hushed tone. We have known for quite a while, however, that our military has possessed a mysterious device which can reach out and "see" through clouds, fog and darkness, and that this same instrument has been a factor in Allied victories.
Test Your Coordination

By Luis Hochman IS YOUR party growing dull? Are your guests looking at their watches, yawning, and searching for the nearest exit? Then it is time to bring out some new fun in the form of a contest of skill with paper and pencil. The props are simple, just plain writing paper and a couple of pencils .... the stunts, well suppose you try them.
ROCKET TO THE MOON?

The favorite theme of science fiction is no longer a fantasy-latest advances in rocket research make it a distinct possibility. BY WILLY LEY Charter Member of British Interplanetary Society and Author of Rocketsâ€”Future of Travel Beyond the Stratosphere THE STORY OF THE MOON GUN WITH the exception of an occasional comet, our moon is the nearest of all celestial bodies. Its average distance, in round figures, is 240,000 miles. Sometimes it is distant by 13,000 miles more, sometimes, when the moon is closer in its orbital gyrations, it is almost 20,000 miles less. The average, or mean, of all the possible distances is 240,000 miles; or, if you want to be more precise, 238,900 miles. As astronomical distances go, this is very close indeed; it is not even very far when a purely terrestrial yardstick is applied. I know a Hollywood producer who, for business reasons, has to come to New York five times every year. After eight years of flying to New York five times a year and back, he will have travelled the whole distance to the moon. Taken as one trip, it would be 900 hours on a fast transport, 600 hours on a modern fighter plane.
President Roosevelt's personal plane had an elevator

President Roosevelt’s personal plane which is in reality a specially designed Douglas C-54, was used by the late Chief Executive on several historic trips. Elevator made it possible for him to come aboard in his wheelchair easily.
Britain's Walls of Fire

A vertical flame thrower is certainly an cool looking, if not terribly practical idea. Britain’s Walls of Fire Awesome flame defenses protected Britain against Nazi invasion in 1940 FIVE years after Britain’s darkest days, when invasion threatened hourly, it is revealed that a barrier of flame would have met the Nazis if they had attempted […]